Joint Project between ITMO U and LEGO Education 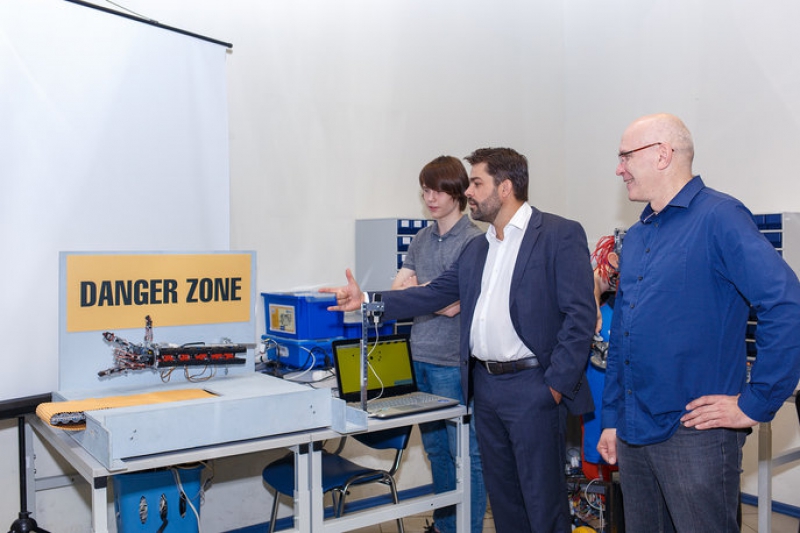 LEGO Education Russia is engaged in promoting educational programs in both Russia and other CIS countries. There are programs in various disciplines for children of different ages. The mission of LEGO Education is to train future professionals ready for challenges of the modern world. Many big companies, such as Microsoft, Intel, Google and IBM, develop their own educational programs, and LEGO Group is not an exception. The company also organizes various workshops for teachers, where they can learn about new teaching methods in the field of robotics, programming, and design.

“We encourage children to think critically and creatively, even before entering the university. We want them to learn to see problems and think about possible solutions”, commented Esben Stark, the President of LEGO Education.

The representatives of LEGO Education visited ITMO Robotics Center at the School of Computer Technologies and Control. ITMO Robotics Center team, headed by Igor Lositskiy, has recently taken first place at the all-Russian olympiad in robotics and will soon take part in the World Robot Olympiad (WRO) 2018. The students of the center won the WRO 2017. Esben Stark noted that he was very impressed with the students' knowledge.

“I asked a school student about how much time he spends at the center, and he said, that he often stays here from 4pm till late at night. These students are exactly the kind of students we want to teach at LEGO Education, motivated and willing to come up with new solutions”, shared Mr. Stark.

He added that the company’s educational programs focus not only on honing professional skills, but also on developing soft skills, such as teamwork and communication skills, as well as decision making and time management skills.

According to Olga Lombas, head of LEGO Education Russia & CIS, it will be fair to say that LEGO Education and ITMO University share the same mission, which is to teach professionals of the future. ITMO University has recently launched the ITMO.STARS project a competition that will allow applicants with unique achievements and strong motivation to study at ITMO University for free without having enough Unified State Exam points. The University also offers many opportunities for students to learn to think outside the box and find solutions to seemingly unsolvable problems. At the university, students work on the development of new technologies, such as AI, computer technologies, IoT, cybersecurity, smart devices, mobile robotics, and quantum communications. This way, students acquire knowledge in different fields, and LEGO Education’s programs also take this aspect into account.

“This means that LEGO Education projects can train more school children who will later apply to study at ITMO University. That’s why we want to work in collaboration with ITMO University. According to forecasts, 75% of professions will change dramatically in the coming decades. Therefore, our task is to teach children skills which will help them overcome the challenges of the modern world. Some students think that if they study, say, chemistry, they don’t need other subjects, but they are wrong. All disciplines are important today, especially soft skills”, commented Olga Lombas, head of LEGO Education Russia & CIS.

More than ten million children from all around the world took part in LEGO Education’s events last year. There are programs for school children of different ages. For example, elementary school children can use We.Do 2.0 kit to learn the basics of natural science. They can even try their hand at constructing robotic models. While LEGO Mindstorm kit can be used to construct robots and perform some mathematical calculations.

ITMO University and LEGO Education plan to sign the cooperation agreement till the end of summer 2018. The parties will cooperate in the following fields:

“This collaboration offers ITMO Robotics Center a unique opportunity to test a new LEGO product. Apart from that, this will further enhance the image of the laboratory”, commented Igor Lositskiy, head of the center.