The 2019 World Robot Olympiad, an international robotics competition for talented school and university students from over 70 countries, has just come to a close in the city of Győr, Hungary. Led by coach Igor Lositsky, ITMO University whizzes took second place, surpassing more than 30 teams in the Senior High age category. They presented their project LEGO Education Helper, a smart table that cleans itself. 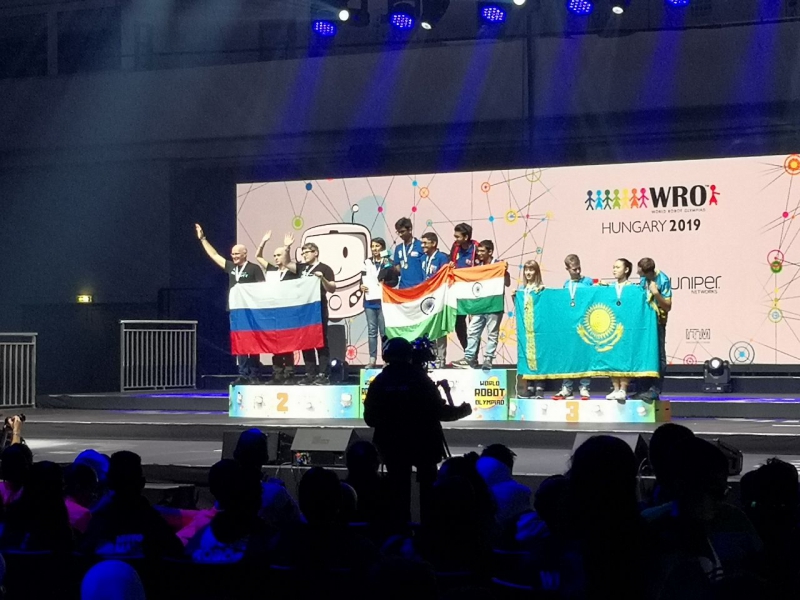 The 2019 World Robot Olympiad (WRO) took place in the Hungarian city of Győr on November 8-10. This year, the competition’s main topic was Smart Cities, calling for new concepts, ideas and technologies that will help to build cities of the future and change existing forms of everyday life. Young robotics enthusiasts could present their inventions in the fields of smart education, smart workplaces, and other areas of intelligent urban management.

The team of ITMO University’s Youth Robotics Laboratory took second place in the Senior High age group of the Open category, having scored 164.78 points. Placing first was a team from India (168.50 points), while third place went to participants from Kazakhstan (158.83 points). A total of 34 teams vied for a place on the pedestal. The full scoreboard is available here.

ITMO University was represented by decorated champions of international robotics competitions, first-year students Daniil Nechaev and Levon Pogosov. Working alongside them on the winning project was another member of the Youth Robotics Laboratory, Dmitry Kharlapenko, who couldn’t be present at the competition finals. The team was coached by Igor Lositsky and Evgeny Zavarin. The Youth Robotics Lab initiative is implemented by ITMO together with the Presidential Lyceum №239.

The team competed with their project LEGO Education Helper, a light source-equipped smart table which cleans itself on its own. Earlier, this project was named best in its group at the 2019 Russian Robot Olympiad, which took place at the Innopolis University in Kazan and yielded the team their ticket to Hungary.

On the face of it, LEGO Education Helper is much like a school desk with a lamp on it. But apart from providing lighting, the lamp is in fact a robot that can neatly clear the table of random objects and sort them into appropriate sections of a special box. Powered by a neural network, the robot classifies the objects into different categories and uses this information to choose the right section to put them in. Small objects are picked up using a special vacuum gripper, which comes in the form of a balloon filled with ground coffee. This enables the robot to softly envelop small objects, whatever their shape, and lift them up by force of vacuum pressure.

Yet another part of the project is an eraser robot, which operates on the blackboard situated behind the desk. Based on pre-set parameters, it is able to independently identify the writing that needs to be erased.

According to Igor Lositsky, it took the team about two months to flesh out the project. After its win at the Russian Robot Olympiad, it was subject to further, and sufficient, improvements.

“The project really changed for the better. As we had envisaged, our light source took the form of the famous lamp off the logo from Pixar animation studio, which served as our inspiration. What is more, the system became more efficient. Many people at the Olympiad even approached us saying that they’d like to buy such a system for themselves,” shares the winning team’s coach.

As per the rules of the competition, the teams had five minutes to present their projects, with five more minutes given for answering the judges’ questions. The presentations had to be both comprehensible and creative.

Held since 2004, the World Robot Olympiad (WRO) is an international competition for school and university students aged 10 to 21 years old. Every year, WRO attracts over 2,000 talented contestants. A total of 424 teams from 73 countries partook in the 2019 finals.

This year, Russia was represented by 41 participants from nine regions of the country. They competed as part of 13 teams from Moscow, St. Petersburg, Vladivostok, Miass, Nizhny Tagil, Ramensky, Mytishchi, Magnitogorsk, Novocheboksarsk, and Innopolis in all four WRO categories: Regular, Open, Football and Advanced Robotics Challenge.