The World Robot Olympiad (WRO-2017) has just come to a close in Costa Rica. The international competition for talented school and university students involves participants from more than 60 countries. ITMO’s team of school students, led by coach Igor Lositskiy, has won the gold medal in the Open category’s Senior age group. Russian teams have also claimed gold medals in all three age groups of the Regular category (as well as both silver and bronze in the Elementary age group), the bronze medal in the Robot Football competition and another gold medal in the Open category. 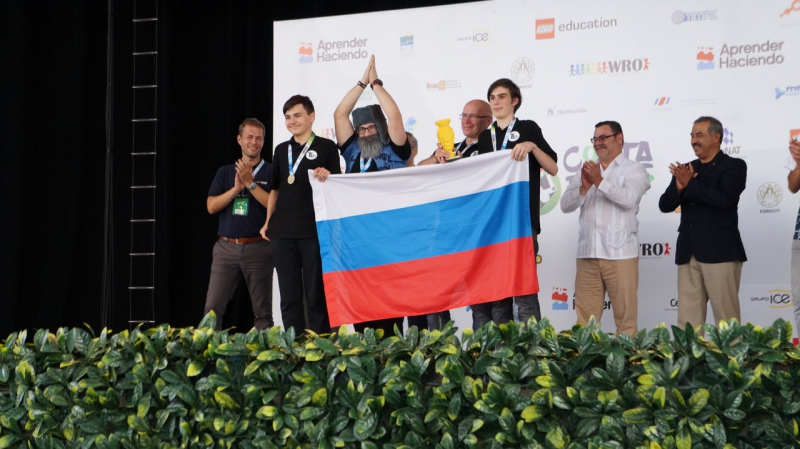 ITMO University’s school team from the Creative Robotics Lab at ITMO’s School of Computer Technologies and Control has taken first place in the Open category (Senior age group), coming out ahead of the German team (silver) and the Syrian team (bronze). The team includes three members – school students Gleb Zagarskih, Daniil Nechaev and Maksim Mikhailov, with Igor Lositskiy and Evgeny Zavarin as coaches. The Creative Lab project is implemented in collaboration with the Presidential Physics and Math Lyceum №239. At the competition, ITMO University’s team presented a robot named Forester. This robot, capable of both walking and riding, is intended to monitor the state of forests, fulfilling the responsibilities of ten forest rangers – it evaluates the condition of trees, determines the areas in need of preventative felling and even helps predict possible wildfires. As Igor Lositskiy notes, the students have even built a neural network to help the robot identify the species of trees. Earlier on, the robot had already won the first place in the Creative category at the Russian Olympiad in Programming of Intelligent Robotic Systems. As the team’s coach Igor Lositskiy explains, in addition to showcasing their projects, teams were also expected to demonstrate their creative side. For their presentation, student Daniil Nechaev tried on the role of a Russian forest warden.

“At WRO, the presentations have to both show off the complexity of the project and also surprise the jury with some unusual, bombastic approach. We donned Daniil in an ushanka and a beard and turned him into a real Russian forest warden – the story goes that he got lost in the forest and had been stumbling around for the past ten years, surveying everything. Finally, he meets Forester and learns that his work can easily be done by a robot,” – comments Lositsky. As the coach says, one of the improvements the team made before their presentation in Costa Rica was the mechanism that allows the robot to detach from a carrier drone.

“Everything worked perfectly, and, importantly, we managed to please to audience. People took selfies with us and were very entertained by our “genuine Russian forest warden”,” – he says.

The World Robot Olympiad is an international competition for school and university students aged 10 to 21, held annually since 2014. Each year, more than 2,000 participants from more than 60 countries take part in it. This year’s final competition was held on November 10 to 12 in San Jose, the capital of Costa Rica. Each year’s Olympiad has a specific topic to which the tasks adhere. The topic of 2017 is “Sustainobots [Robots for Sustainability]”. In 2017, the Russian select team included 22 teams participating in four categories – Regular, with four teams in each of the three age groups; Open, with four teams overall; Advanced Robotics Challenge, three teams, and the Robot Football category, three teams. The teams have won gold medals in all three age groups of the Regular category, as well as the silver and bronze in the Elementary age group, the bronze medal in Robot Football, and two gold medals in Open. In addition to teams from St. Petersburg, teams from Vladivostok, Nizhny Tagil, Tyumen, Murmansk, Novosibirsk and Tatarstan took part in the competition. Daniil Nechaev at the lab

The teams couldn't be stopped even by the earthquake that coincided with the final day of WRO-2017. Per the participants’ words, the tremors continued for some three minutes and repeated several times. Local media has reported that tremors with magnitude of up to 6.5 have been recorded.