From June 23 to 25 the final stage of the Russian Olympiad in Programming of Intelligent Robotic Systems was held for the fourth time in the city of Innopolis (Republic of Tatarstan). The Olympiad features contestants from all over the country and thus serves as the Russian qualification round for the World Robot Olympiad. ITMO University’s team and their forest pathologist robot Forester secured the first place in one of the competition’s categories. 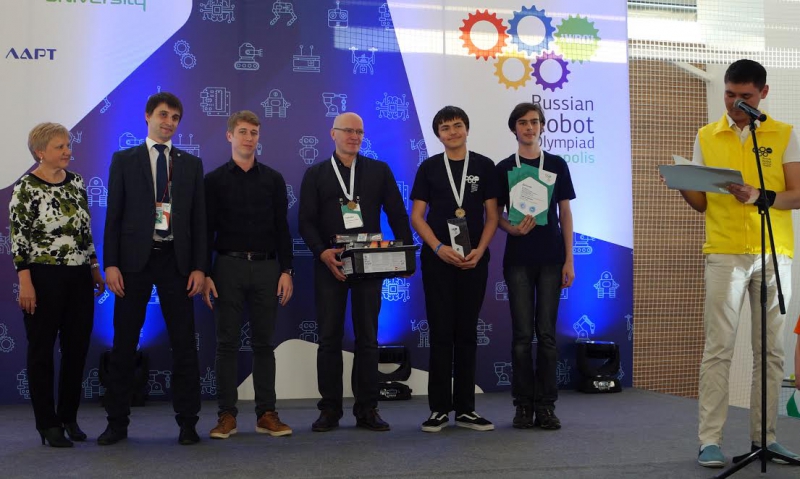 The World Robot Olympiad (WRO) is an event that brings together young developers and scientists from all over the world. The youths are expected to hone their creativity and problem solving skills through complex and educational robotics competitions. Approximately 50 countries participate in the WRO, each represented by teams of two to three members. The teams need to build a robot that meets the specifics and is intended to deal with a particular challenge. Each year the players are given new challenges that entail certain goals and requirements.

For the 2017 competition, the organizers decided to ask the teams to respond to the issues of global sustainability. As they explain, sustainable development has three basic factors: ecological, social and economic. Because of this, the teams were given the task of developing a robot that would help deal with the most pressing issues of today’s ecology; robots that could help produce clean and inexpensive energy, build sustainable cities, fight climate change and preserve land-based ecosystems.

ITMO University’s team had become the winner in the Creative category for upperclassmen teams.To the Russian stage of WRO they were accompanied by their project: the robot Forester intended to track forest health. The robot’s creators are high-school students Gleb Zagarskikh, Daniil Nechaev and Maksim Mikhailov, led by ITMO’s robotics coach Igor Lositskiy. "We’ve been working on the robot since February of this year and we have gradually, bit by bit, improved upon its construction; hence the change in its appearance compared to the initial prototype. For instance, during the competitions in St. Petersburg in April and May we presented a different make of the robot; it used to only be able to ride on wheels, but now it can walk, too,” – explains Igor Lositskiy.

The terrain-crossing robot Forester (at the lab he is referred to as a “forest pathologist robot”) tracks forest health with the efficiency of ten human workers: it collects data on the state of trees, identifies areas of the forest that need to be felled and helps prevent forest fires.

In practice, the robot will be applied in such manner: a quadrocopter delivers it to the area of the forest that needs to be analyzed. From there, the robot continues on its own. Using a camera and a set of algorithms, it can keep track of where it is in relation to its landing zone. Special sensors help precisely measure distance to an object and determine where a tree is, what kinds of tree it is and what state it’s in. Daniil Nechaev with an early version of Forester during development

Still, the victory at the Russian stage does not necessarily mean that the winners will indeed take part in the World Robot Olympiad, which will be held in November in San Jose, Costa Rica. ITMO University’s team will now have to pass the online selection process, for which each of the teams must prepare a video presentation of their project. Any team is free to apply regardless of their results at the Russian Olympiad. Experts from all over Russia will examine the applications and use them to assemble Russian select teams in several age categories.

It should be added that ITMO University's school teams are prominent winner of various competitions in robotics. In May of this year, ITMO's select team of high-school students won first place at the RoboCup Russia Open 2017. The team built and programmed a robot named Seldon who can play the ukulele, sing songs by Adele and wave to its fans.