For the second year in a row, ITMO University became the only venue in St. Petersburg to host the onsite round of the Potanin scholarship contest. In the course of three days, some 360 Master’s students from Moscow, St. Petersburg, Kazan, Krasnoyarsk, Yekaterinburg and Chelyabinsk competed in business games, learned to work in teams and presented their results to the expert panel of judges. Participants with the best results will be awarded with a monthly scholarship of 20,000 rubles. More on the contest in this article. 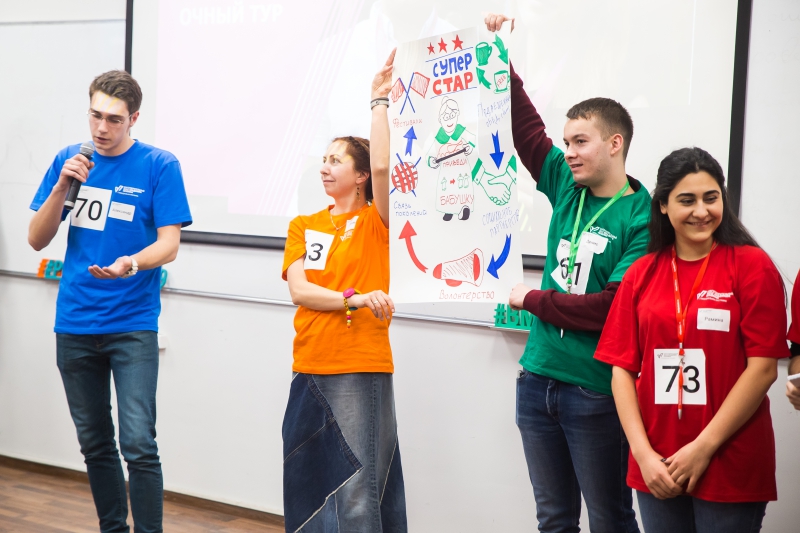 Onsite round of the Potanin scholarship contest

The Vladimir Potanin scholarship program is aimed at supporting students and lecturers of Master’s programs at Russia’ leading universities. This is the biggest project of the namesake foundation, with over 27,000 students and 2,000 lecturers from 83 universities awarded since 2000. The program’s goals are to help talented students and teachers, encourage the development of innovative approaches to education, promote best practices, and boost students’ and lecturers’ interest in socially significant activities and volunteering.

An important subprogram of the Potanin scholarship is the scholarship contest for Master’s students. This annual competition is carried out in two rounds. In the first, online one, the students submit a written application consisting of a motivation letter, an essay taking on the topic of leadership, and a science-pop essay on the topic of their Master’s thesis. All applications undergo a preliminary technical examination that checks them for plagiarism, among other things. The second round is an onsite one, held as a range of business games, interviews, case solving and other forms of individual and group assessment.

According to the representatives of the Vladimir Potanin Charity Foundation, 6,286 students from 75 Russian universities applied for participation in the first round of the 2018/2019 academic year scholarship contest. Of all of these applications, 3,324 were approved for further selection subsequent to the technical examination, with 1,998 participants making it through to the second round after that. The second round took place from January 28 to February 9, 2019, in seven Russian cities: Moscow, St. Petersburg, Kazan, Rostov-on-Don, Tyumen, Tomsk and Vladivostok. The students were welcomed by seven local universities that are participants of the Vladimir Potanin scholarship program and served as venues for this round.

Selection was carried out in the format of business games and case presentations. Participants had to not only demonstrate their creativity and erudition, but also their presentation skills, as well as the ability to find middle ground with one another, work in teams and think critically. It is these qualities, highlights the Potanin Foundation, that make a modern leader.

As per the rules of the competition, all tasks were performed in groups during one full working day. All participants had the opportunity of displaying their skills when part of different teams, as each competition day saw them work in different groups to meet and interact with as many fellow participants as possible. All assignments were kept in secret until the designated competition day, doubling the task for participants, who had to not only keep their cool and put their knowledge to best use, but also quickly bring themselves to adapt to a new team they were put into.

“The main idea behind the onsite round is that it allows us to watch the students communicate and interact with each other in live-mode, as well as evaluate their teamwork skills, or, in other words, how well they’re able to cooperate but at the same time stand their ground if and when needed. Our focus this year were social skills, which were, one way or another, targeted by all of the tasks of the onsite round,” commented Natalya Shulgina, program director at the Vladimir Potanin Charity Foundation. “There were eight tasks altogether, each of them modeling different scenarios in a game format, or by way of case solving, debates, and presentations, which allowed the participants to make use of their leadership, intellectual and creative potential, and also to demonstrate their erudition and cultural intelligence. That is because all of our grantees are well-educated, well-read, able to think outside of the box and communicate their thoughts in a competent and substantiated way, and have a clear-cut leadership and social stand. We aren’t ones to lower our bar, and that’s why our competition assignments evaluate the whole spectrum of personal and professional qualities of participants.”

The 2019 scholarship contest also involves a better academic mobility of students. By obliging them to spend the onsite round outside of their home university, sometimes even in another city, the organizers wanted to encourage the students to immerse themselves into an academic and organizational culture of a different educational institution, as well as to make new professional and personal acquaintances.

There will be 500 winners of the competition in total, with another ten students set aside as reserves. The winners will be awarded with a monthly scholarship of 20,000 rubles, effective from February 18 up until the end of their Master’s studies.

As noted by the participants of the Vladimir Potanin scholarship contest, the experience will come in handy in their future careers. They spoke to ITMO.NEWS about why other students should take part in the competition, what skills it helps one to acquire, and why the scholarship is a great support when studying.

Whatever way you look at it, the scholarship is a welcome addition to your monthly student’s income. I’ve been on an academic exchange once as a Bachelor’s student, and received a scholarship that covered all of my expenses. Now I have the opportunity of doing a semester-worth of exchange at the London School of Economics, but they don’t offer a scholarship there. So getting the Potanin scholarship would offer me the support I need for studying at another university.

Apart from that, what makes this contest so great are all the connections you create and the community you become part of. I have friends who are winners of the Potanin scholarship, and from their example I can see how this community works; this is a tight-knit group of people who overcame the arduous selection process, won, and are now willing to cooperate on real-world projects with other members of that community because they know what it takes to become one.

All of my fellow participants are crazy proactive and interested in completely different things. For example, I was in a team with a girl who researches medieval Irish literature. This was a unique acquaintance, and one that allowed me to learn something new and just generally, have an interesting conversation. Another participant was an ace in ventilation systems, and was so passionate talking about them that she managed to really hammer it home to me how important these systems are. And that applies to each person here.

Irina Busurkina, Master’s student in sociology at the Higher School of Economics

First and foremost, participating in the Potanin scholarship contest gives you this amazing opportunity to claim substantial scholarship funding, but what’s also important is that it allows you to meet new people. This is because it brings together participants from different universities and of different majors. I specialize in education sociology, namely gamification of education and research on the impact computer games have on the education process and school students themselves. Doing the tasks proved to be useful for my regular work and studies as practically all of them bore some relevance to my previous experiences. For one, we were asked our suggestions for a new subject to be studied at universities. All in all, this was a great way of introducing others to what I do, as well as to find like-minded people and establish new contacts that will possibly come in handy in the future.

Maria Kulakova, Master’s student in management of the hospitality industry and tourism at the Higher School of Economics

I planned on participating in this competition as early as in my Bachelor’s studies. I knew that this was a very prestigious scholarship for Master’s students, so obviously that spoke to me. And it is really true: the Vladimir Potanin scholarship contest brings together the intellectual elite of the country, as the selection process is very complex and only the best of the best make it to the final round. I myself spent a couple of days on preparing my application. My goal for the future is to become a social entrepreneur, and contests such as this one help you meet new, interesting people, and build the connections that are sure to be valuable for your further professional development. This is a golden opportunity for acquiring a great life experience.