As part of the 16th German Week in St. Petersburg, ITMO University’s Science Communication and Outreach Office has organized an open discussion on the topic “The Changing Social Mission of Today’s Scientific Organizations”. Speakers from the Rhine-Waal University of Applied Sciences, the Berlin-Brandenburg Academy of Sciences and Humanities, and the European Organization for Nuclear Research (CERN) discussed the work of scientific organizations in Russia and Germany and these organizations’ impact on social development. 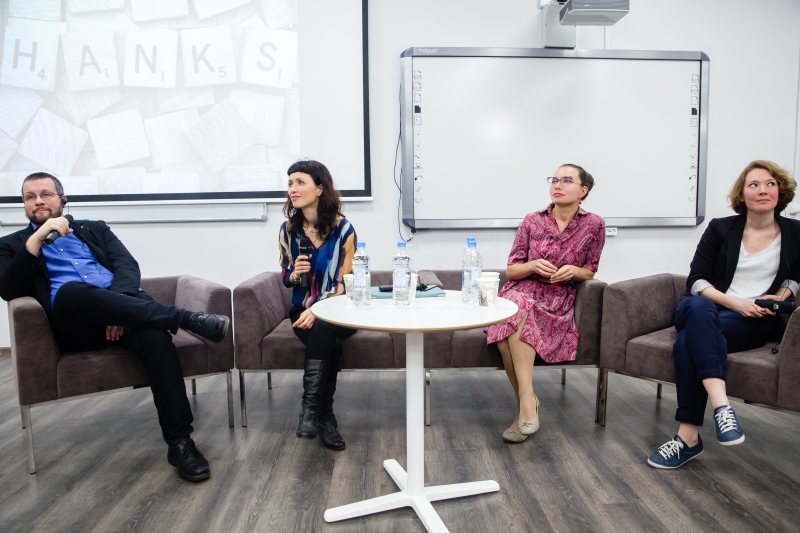 The German Week is an annual urban forum dedicated to the cultural, economic, scientific, and educational exchange between Russia and Germany. ITMO University participated in the event for the first time, prompted by the two countries’ strengthening partnership in the field of science communication and popularization, in which the University is actively involved. In addition, the 2019 German Week is held under the auspices of Russian-German collaboration in science and education.

ITMO University’s Science Communication and Outreach Office served as the main organizer of the discussion; for several years, its team has worked on initiatives designed to improve the science communication infrastructure in Russia. Since 2016 Germany has been one of the Office’s key international partners. For the past two years, ITMO University and the Rhine-Waal University of Applied Sciences have conducted academic exchange of Master’s students enrolled in science communication programs.

Below are the main highlights of the reports delivered by the event’s speakers:

Alexander Struck, PhD, professor at the Faculty of Technology and Bionics of the Rhine-Waal University of Applied Sciences

Science is the search for knowledge, either the verifiable or the falsified kind. To that end, scientists conduct experiments that could be repeated by others. Only reproducible experiments can give us a glimpse into the future and help us understand where we’re going.

To produce better results and exchange their knowledge with others, scientists form collaborations and “communities”. Together it’s much easier to procure the often-expensive equipment necessary for their work. Universities are, too, a kind of such “communities”.

All in all, these groups of scientists are connected by four things: scientific study, development, education, and communication with the outside world, namely the society, which isn’t always capable of understanding the results of this or that discovery.

So how do we present this information to people? Practice shows that it’s important to establish a connection between science and real life, to show how exactly the scientists’ achievements affect everyday life.

That’s where the idea of science communication comes from. It’s important to discern it from internal communication. While the latter concerns the exchange of information between researchers, such as by way of publishing works in journals, the former brings modern research to those whose primary activities are not directly related to science. Universities in Germany today are actively involved in public engagement and finding new formats for communication with the public. I, for instance, run events for kids where I tell them about modern physics. For today’s scientists, communicating with the public has become a part of their day-to-day.

The more traditional approaches are still here: reports on successes and failures, press releases, etc. But those who do PR for universities say that, with each passing year, the number of these publications goes down due to competition from new formats. Among them are free educational courses, which are launched by practically every European university, and citizen science. The latter is a relatively new concept, and what it means is that people without education relevant to the subject take part in research projects. It’s a daring initiative, and one that requires careful selection, but it has the potential to clearly demonstrate how science functions and how much good it can do.

Birte Fähnrich, PhD, senior researcher and coordinator of the interdisciplinary research group "Implications of Digitization for the Quality of Science" at the Berlin-Brandenburg Academy of Sciences and Humanities

Germany has always been an important area for the development of modern science and science communication. In the 19th century, university reforms in Prussia introduced the ideas of academic humanities education, unity of research and teaching, and the independence of science from political intrusion. Scientists had understood the importance of focusing science on finding solutions to pressing issues of the society.

Today, universities pay extra attention to how they are seen by the general public. By 2011, 90% of all German universities had established departments focused on communication, employing 1 PR specialist per every 20 professors.

The number of communication channels grows with time: the usual mass media outlets are joined by social networks, which provide universities with new audiences. Yet no one has conducted research to find out how activity on Facebook or Instagram, as well as the organization of public events, affects a university’s public image.

Communication can be individual, too. Today more than ever, scientists must be seen: they need to deliver open lectures, conduct events for children, and find new ways of interacting with the public. Being a scientist today means also being a PR specialist.

Alexandra Borisova, co-founder and president of the Association for Communication in Education and Science (AKSON), staff member of ITMO University’s Science Communication and Outreach Office

One of the definitions of science communication goes like this: science communication refers to clear, organized, planned actions aimed at the propagation of scientific knowledge, methodologies, methods, and practices in the conditions where a substantial part of the audience is made up of non-specialists.

This definition implies three missions for universities: the training and development of human capital, the production of new knowledge, and, finally, contribution to their own environment, which involves the tackling of social issues and analysis of society’s needs. Looking back on the history of Russian universities, it’s quite clear that the second and third missions are a novelty to us. Many of our parents studied in universities that did no research and simply trained specialists. And it was hardly possible to interact with the public without a well-developed communication structure that would include press offices, event organizers, and so on. And quality of university education drops quickly in such conditions.

In 2016, we founded the Association for Communication in Education and Science (AKSON). Our aim is to facilitate the development of a science communication community in Russia and integrate it into the international community. From the very get-go, we began to set standards; to that end, we’ve launched the Communication Laboratory award, which is given to distinguished university communication teams. A large jury made up of science journalists and scientists with a high media presence highlights the best practices, and we generalize and propagate them among the professional community.

For instance, the category Experiment honors those who organize events that aren’t directly related to science. It’s a classic example of outreach, when universities move into the outside world and contribute to their environment. Our colleagues from the Higher School of Economics, whose project “University, Open City” was the winner in the category, did not just organize a lecture; they created an entire ecosystem in their city aimed at the dissemination of new knowledge. It included festivals, a music projects center, and an eco-movement. The project went on for a year and demonstrated how a modern university can be active outside of its own campus.

One unusual case in Russian science communication is that of the Moscow Institute of Physics and Technology, which was the first to collaborate with the Russian Railways on a branded suburban train, a vehicle symbolic to MIPT. Its passengers could familiarize themselves with photos from the Institute’s archives, learn some of the student community’s tall tales, find out about MIPT’s past and current discoveries, and read quotes from its founders. The train operated for a year in Moscow and the Moscow Oblast.

On September 1, the Novosibirsk State University will host the Open Space Picnic, an event that combines science and entertainment. Workshops in physics, biology, and robotics occur alongside a Science Slam and concerts, while a fireworks display tops it all off.

Daria Dvorzhitskaya, a researcher at the European Organization for Nuclear Research (CERN) and ITMO University's Science Communication and Outreach Office, a graduate of the Rhine-Waal University of Applied Sciences’ program in science communication

CERN is a European particle physics research lab founded in 1954. Today, it is home to the world’s largest particle accelerator staffed by some 16 thousand people. That’s approximately half of all of the world’s particle physicists. Germany was among CERN’s 12 founding states, and currently accounts for 20% of the organization’s budget.

CERN’s primary purpose, of course, is to conduct research: accelerate and collide particles, observe the results, and solve the mysteries of the Universe. But it also has other, non-research-related tasks. First, it represents fundamental science on the international scale. The organization is funded entirely by taxpayer money, and thus transparency is crucial to all of its research. It’s a matter of responsibility to the public. If people no longer understand why we have to accelerate particles, CERN will cease to function. That’s why it has around 70 staff members whose job is to handle communication with the public.

Another of their tasks is to maintain communication with the industry and conduct the transfer of technological innovations. CERN does not ignore education, too. One of its missions is to raise the next generation of scientists and engineers, which they do through programs for school students and teachers. Those who come there spend a week learning about modern science and then, having come back to their classrooms, tell children about what it’s like to work there. The staff at CERN also run a competition for high schoolers from all over the world, and its winners get the chance to test their ideas at the Large Hadron Collider.

Another important task for CERN is to provide inspiration and propagate scientific culture among the public. That includes tours, exhibitions, open lectures. Artists are invited to the facility to let them express their own vision of CERN in paintings, photographs, and other art forms.

One of the organization’s current priorities is to establish a closer relationship with the citizens of nearby Switzerland and France. There have been times when tourists from Brazil would know more about CERN than those who live right next to it. Many people imagine it to be some sinister, behind-closed-doors organization that’s either making black holes or talking to aliens. To dispel these misconceptions, we conduct open door days and expand our audience.

Yet another task is finding new scientific prospects to follow after the Higgs Boson and the LHC. It’s not clear if new research will bring any significant results. The matter of this or that project’s relevance hits close to home for many communication specialists. That’s why we make an emphasis on “spin-off technologies”, medicine, and peaceful international collaboration. Yes, we do physics, but we also employ more than 16,000 people from all around the world to do science, not build bombs.

Does CERN achieve the goals it has set for its communication initiatives, and does it maintain the level of responsibility that it must carry as a major international organization? The answers to these questions will emerge as the result of a joint project between ITMO University and the European Organization for Nuclear Research.