Science and Art Come Together at the “New Anthropology” Exposition

Last fall, “New Anthropology”, a unique project uniting Russian artists and scientists to create technological art, was launched at Pavlov Institute of Physiology. 15 exhibits became the outcome of the project including immersive installation, media- and soundart. Read on to learn more about the idea behind it, the story of the country’s first naukograd (science city) and the significance of the exhibition. 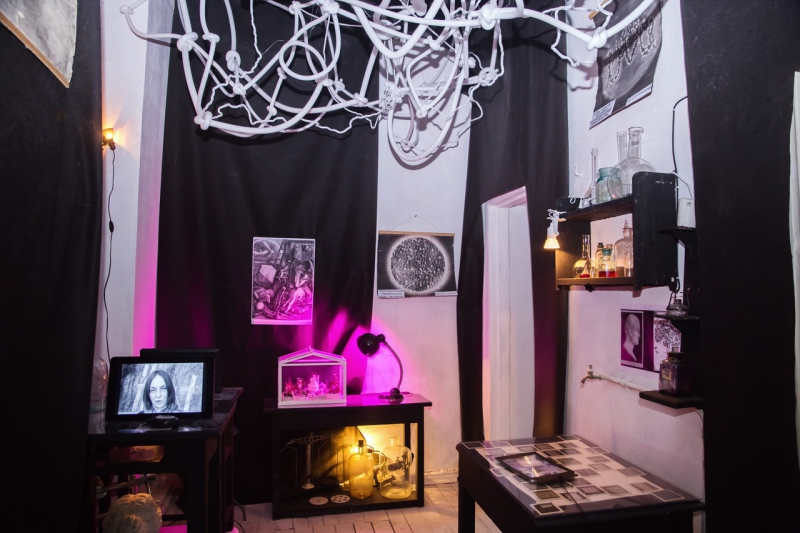 The story of Pavlov’s Koltushi

The “New Anthropology” project was designed as an opportunity to draw attention of the general public to the great heritage of Pavlov Institute of Physiology and to the research being conducted in Russia’s first naukograd these days.

“We wanted to open our institute to the public and on the other hand, it was our first step on the way to preserving the scientific heritage of the place and demonstrating the lack of various forms of support, financial being one of them, that is felt in the city. It was also fascinating to see the way science and art can interact through interdisciplinary connections making these two fields present themselves in a completely different, unexpected way,” explains Irina Aktuganova, head of the project.

The science city was founded back in 1926 at the initiative of the country’s first Nobel Prize winner, Ivan Pavlov. After the Civil War broke out, it became difficult to even live in St. Petersburg, let alone conduct scientific research. Pavlov had a big staff and animals at the laboratory, none of whom he could find food for. In 1919, the scientist applied to Vladimir Lenin for a territory to build a biostation on and funding for that process. Pavlov himself chose Koltushi, where a full-scale construction took place in 1926-1934: architect Innokenty Bespalov designed the main laboratory building, Pavlov’s own house and buildings for his employees as well as sites for the animals to be held in.

The naukograd was flourishing up until the 1970s, but the 1990s brought an end to it: with no funding, the Institute was in decay. That was when instead of the forest formerly surrounding the science city, new apartment blocks grew around it. In just 20 years the population rose by 40-60,000 but the institute was still in isolation: no one knew that experiments were carried out there.

The “New Anthropology” project began in the fall of 2018 with the announcement of an artists’ contest. Its aim was to find those artists who would be interested in collaborating with the Institute’s laboratories. More than 100 applications were received, 40 of which were approved. These 40 participants went to Koltushi to meet the scientists and explore the Institute. After that, they presented projects of their future creations, 15 of which have been implemented and are now on display at the Institute.

“The result exceeded our expectations as at first we had doubts about its completion. We knew that no one else had managed to succeed at such a project in Russia before. Several teams have started but then they faced difficulties that primarily had to do with misunderstandings between scientists and artists. They viewed the world radically different, and it was a natural stumbling block to all their common efforts. But we were lucky with that and even more so, as some of our artist-scientist pairs continue to work together, developing new projects. According to the participants themselves, it has completely changed them. So, eventually, our project brought happiness not only to the visitors of the exhibition but to creators and collaborators themselves,” shared Elena Rybnikova, PhD in Biology, Deputy Academic Director at the Institute.

The exhibition occupies the first floor of the historic building where Ivan Pavlov lived and conducted his work. Each room of the exhibition was named after a laboratory but was not an actual representation of such, each room was only a model. It was the only way the organizers could fit the Institute’s vast diversity of research centers and blocks into a single exhibition.

Each door leads to a number of exhibits that were created using different technologies. Some of them are devoted to the Institute’s history and achievements while others make one think of the ethics in science, of the animals that used to be subjects to the experiments and of the future of humanity.

“German Preobrazhensky and Alla Mitrofanova, philosophers, have made an important contribution to the project. They introduced academic meanings into our work that we had never considered before. Consequently, we ourselves started viewing certain aspects differently, for instance, those of ethics and aesthetics in science, so I would say our collaboration was beneficial for both sides,” continues Elena Rybnikova.

A bright example of how philosophy applies to science art is “Inside a black box”, an exhibit in the laboratory of the central nervous system, created by the “Where the dogs run” group of artists.

“This project was conducted in collaboration with programmers and it is interesting because the artists have created an optic neural network that we are not used to seeing. It is usually either in a human brain or inside a computer, and both of those do not allow visualization on a screen. The exhibit works this way: in a box with Drosophila-flies there is a web-camera that is transmitting the image to the screen; the image is then transformed into 122 pixels which correspond to 122 neurons, and after a series of light resistors these are cut down to only 50 neurons. Each neuron corresponds to a symbol in the Latin alphabet: a number or a letter. Thus, flies are transformed into text with a mechanical neural network. And this network is a metaphor of the human cognition which is constantly at work translating its interpretations of the real world into symbols,” comments Irina Aktuganova.

The organizers explained that this approach was inspired by the Torah that is continuously changed by putting the letters into a different order. It is done so that one day people can find the true message of God. The flies are a metaphor for replacing the letters and there is a possibility that one day their chaotic movements will create a meaningful message on the screen.

The sound art genre was represented with several exhibits. For example, “phantom” developed by Dmitry Morozov. (::vtol::) is a system that creates audio and visual images using technologies from the beginning of the 20th century. The sound directly affects the visual images, moving in synchrony. The project is a media-archeological exploration and a reflection on the earlier interest in the audiovisual art: how could a virtual reality chair look like had it been created in the 20th century. Another example is “Music for dogs” by Dmitry Shubin, a music track created using signals employed by Pavlov in his original experiments on classical conditioning.

Moreover, there were exhibits dedicated to visual experiments, like “Para-optic-8” by Anastasia Alyokhina. With this one, any visitor can try seeing with their fingers. It’s a mostly parascientific theory of dermo-optical perception that was widely tested in the 20th century. For this exhibit, visitors put special sensors with cameras on their fingers and put another device on their eyes so that they receive an image from the movement of their hands. And if ordinarily we have to turn our heads to look around us, here we would have to rotate our hands. It gives an opportunity to reevaluate our senses and experience something new from this interaction of our bodies and technology.

Yet another important exhibit was created by Lyudmila Belova. It is called “Expectation” and consists of three parts. The first one is a “waiting room” for dogs, the second one, “Laboratory-art-studio”, is a mix between the two research grounds, a confrontation, a mutual interest of art and science in one another. The third one is “waiting room-2” and it is special because it puts the spectators into the same torturing expectation that the dogs had to go through in the first room. And instead of an experiment, there is a distant, distorted future represented by a shadow moving behind a curtain.

Seeing with your fingers, pretending to be a bee while using a pheromone communicator, meeting a cyber-monkey or feeling your defenselessness in the “waiting room” – these are only a few of the possibilities open for those who visit the “New Anthropology” exhibition. The visitors can also see Pavlov’s living rooms and the operating room where most of the experiments took place and most importantly, dive deep into the atmosphere of science and their own physical sensation of being in the first naukograd in the country.