Conference School on Photonics, Radio Physics and Nanotechnologies at Sirius

The second Conference School on Photonics, Radio Physics and Nanotechnologies took place in Sochi from November 2 to 5. The event was organized by the Sirius educational center in collaboration with ITMO University; scientists from Jean Lamour Institute (France) acted as invited speakers. Read about the event’s participants, courses and results in an article by ITMO.NEWS. 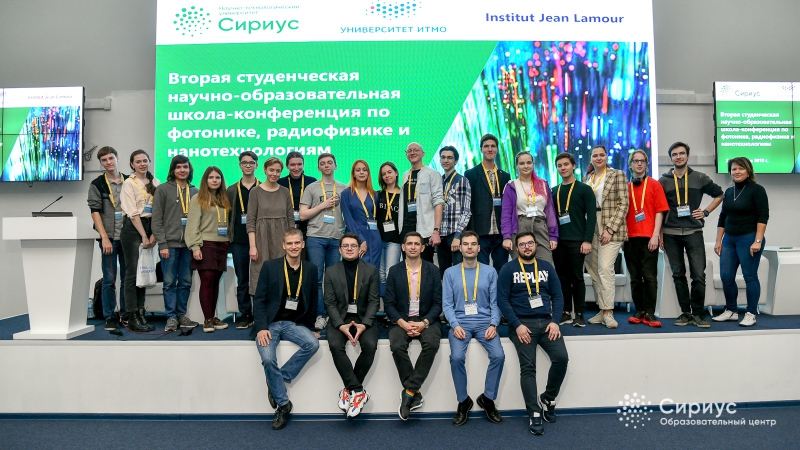 The second Conference School on Photonics, Radio Physics and Nanotechnologies.

The academic Conference School is a joint project of the Talent and Success Foundation (Sirius University) and ITMO University for students of Russian universities who are recipients of the Russian Presidential grant and winners or award winners of associated events and study physics, applied mathematics, chemistry, engineering, electronics, optics, radiophysics and new materials. Pavel Belov, Dean of ITMO’s Faculty of Physics and Engineering acted as the school’s scientific supervisor.

The project aims to immerse the participants in the fields of photonics, nanophotonics, metamaterials, nanotechnology, biophotonics, new optical materials, topology, and interdisciplinary research, and acquaint them with these fields’ trends, innovations and development prospects, as well as potential employers. What’s more, the school is practice-oriented, so one of its key tasks is to give the participants the experience of meeting the industry’s real demands.

Among those who helped the school’s organizers reach its goals were researchers from ITMO University as well as leading scientists from Jean Lamour Institute.

This year, 127 people applied for the school, including 53 students from different cities of Russia: Moscow, Saint Petersburg, Kazan, Novosibirsk, Tomsk and so on. The program was organized in such a way that theory intertwined with practice: the participants discussed the trends and challenges of the associated fields of science at roundtables and then solved cases during the hackathon.

“In the course of four days, the students attended lectures by leading scientists from the Faculty of Physics and Engineering, heads of laboratories and Master’s programs, Russia’s most cited young scientist according to Scopus, and researchers from France. Among those was a lecture by Thierry Belmonte, the director of Jean Lamour Institute and a pioneer in the field of nanoscale plasma synthesis of materials. Two other French scientists took part in the conference: Stéphanie Bruyere, an expert in the field of super-resolution electron microscopy, and Jean-Francois Pierson, head of the Chemistry and Physics of Solids and Surfaces Department, a world-class expert in the field of thin film synthesis who developed over five new types of materials,” says Julia Tolstykh, the event’s organizer.

The topic of the school’s roundtables were “Scientific success in Russia and abroad” and “Interdisciplinary research”. The participants could ask all the questions they wanted, as well as discuss various matters with the speakers.

“We spent most of the time listening to lectures on nanotechnology and photonics. But I also want to mention the roundtables - this was a really interesting format, during which we discussed issues that are relevant to all scientists. And I really liked the hackathon during which we solved cases. The point was that nobody had the correct answer, and at the same time it was important to study all the options, identify the advantages and drawbacks of every idea and present a project within a time limit. In comparison with other conferences that I attended, I have to say that all of this event’s speakers were open to communication with the participants, they actively replied to questions and gave advice. I also liked the concept of bringing together active students from various fields and regions of our country, as this helped create a unique and very productive atmosphere at the event,” shares the conference’s participant Almaz Gilmullin.

The third day of the Conference School was dedicated to the hackathon with the topic “Modern scientific problems”. The participants split into 11 teams and solved relevant scientific problems in such fields as creating a design for a storage device, protective tags of the new generation, producing innovative antibacterial coatings, and improvement of MRI quality. In every category, a team that proposed the best solution was chosen by the jury.

“The hackathon was an important component of the school where teams of students worked on unconventional scientific problems; one of the tasks had to do with working on the steps to commercializing their inventions. One of our school’s features is its interdisciplinary focus, and that the students get the opportunity to not just attend lectures and practice during the hackathons, but also communicate with scientists and asked them various questions, which is especially important in their early careers. Such issues as financing in science in Russia and abroad, the meaning of success in science, choosing a research advisor and topic and how to work efficiently and avoid burning out were brought up separately,” says Dmitry Zuev, an associate professor at ITMO’s Faculty of Physics and Engineering and one of the Conference School’s speakers.

The organizers noted that the idea of the hackathon’s winning team was so successful that the participants will continue working on it under the supervision of a research associate from the Faculty of Physics and Engineering. If everything goes well, their project will be patented once they complete their research.

“I started to better understand what being a scientist is about and which problems they encounter in their work. I also learned that there are many elements of business in science, which makes it a field relevant from the development standpoint and not a domain of conformists. But what’s most important is that I came to understand what I really want to focus on. On the whole, I’m glad that I took part in this school!” says Iskander Sigbatulin, another of the event’s participants.

Apart from getting invaluable experience from participating in the school, the most active students got invited to participate in an internship at the Faculty of Physics and Engineering.

“In my opinion, a distinctive feature of this school is that the students can get insight into several fields of modern physics during a single event. What’s more, they get essential knowledge in these fields and learn of the existing opportunities for professional development, i.e. various educational programs, scholarships and other support in what has to do with science and education that are essential for starting a career as a young scientist,” says Stanislav Glybovsky, an associate professor at the Faculty of Physics and Engineering and one of the Conference School’s speakers.