Last week, ITMO University hosted the first international Cognitive Technologies and Quantum Intelligence conference. The event brought together scientists from interdisciplinary fields that study the application of quantum approaches in researching human cognitive and psychological processes. The experts also discussed the capabilities of quantum computations in analyzing Big  Data,  and presented a series of reports on the subject of studying and manipulating public opinion in social media. 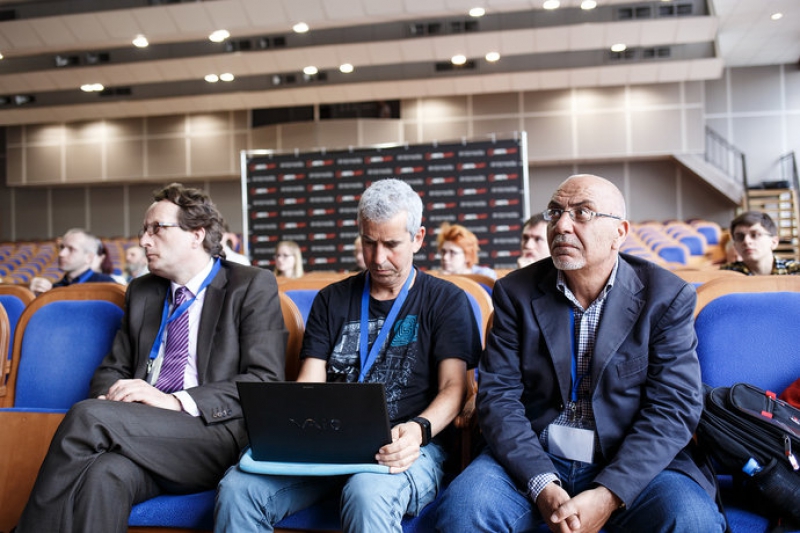 Aleksandr Alodjants, deputy chair of the conference and senior researcher at ITMO’s Laboratory of Quantum Cognition and Intelligent Systems underlines that it was the  development of different decision support systems and the associated mathematical and physical models, as well as their application in psychology, economics, and social sciences, that was among the most relevant topics of the conference. Amongst the other key issues were reports on research of complex multiagent systems like social groups and social networks, as well as the application of quantum theory, cognitive sciences, and modern information technology in the development of artificial intelligence systems. Aleksandr Alodjants stresses that cognitive approaches and IT are indispensable for creating AI systems. Quantum research methods make it possible to describe complex systems a lot more precisely, as well as understand the regularities of their operation better.

“Currently, the “gravity center” of such research is well outside Russia. USA, Europe and other developed countries invest lots of resources into interdisciplinary studies, while in Russia their feasibility is still a matter of discussion. The conference’s organizers - ITMO University and the Russian Foundation for Advanced Research Projects in the Defense Industry - were the first in our country to ever join efforts in order to face this problem. The main challenge when working on this subject is that it calls for competencies in very different sciences that utilize a wide range of methods and approaches. Thanks to us inviting leading experts from these fields, the conference has become an important platform for discussing them. A sustainable community of scientists is crucial for  developing this subject field in Russia,” comments Mr. Alodjants.

The absence of registration fees made it possible to attract colleagues from different fields, and not just scientists, but also students and specialists from the field of business and culture. The interdisciplinary nature of research presented at the conference proved to also be relevant from the digital economy point of view. Still, such questions as what modern cognitive science is about, and which fields of research are currently the most relevant and sought-after, emerge. According to Maria Falikman, professor at the Higher School of Economics, the boundaries of what we call cognitive science are becoming all the more ill-defined. At first, this field was said to include only research at the intersection of experimental psychology, philosophy of mind, linguistics, computer science, neural science and cultural anthropology, but now it also involves such fields as economics and law.

“The issue of the evolution of human knowledge is now considered among the most important fundamental problems: how does it change in the light of development of fundamentally new technologies, much as the problem of correlation of our consciousness (subjective experience) and the workings of our brain - the so-called psychophysical problem. The methods for studying the brain are constantly perfected, and now cognitive science has to decide whether to accept the neurobiological explanation of knowledge and consciousness as exhaustive, or there are regularities that rely on something other than the data that can be derived with different brain activity registration methods. As for application tasks, the development of AI and neural interfaces, i.e. systems that make it possible to control external devices (e.g. artificial limbs or an exoskeleton) by tracing one’s brain activity, are at the forefront of modern research.  Amongst other important issues is researching the nature of cognitive development disorders (dyslexia, for instance) and development of associated treatments, as well as the issues that have to do with human interaction with augmented and virtual reality,” comments Maria Falikman.

Several of the conference’s presentations were dedicated to modern Russian research on how public opinions in social networks are formed. The scientists explained which formulas can be used to predict the effect of particular posts or comments on users’ opinions, why these opinions are contingent on the opinions of other users, and commented on the technologies for manipulating public opinions in social media that are currently being developed.

Aleksandr Chkhartishvili, chief research fellow at the Institute of Control Sciences of the Russian Academy of Science, spoke about the purpose of studying models of influence in social networks and the associated methods and approaches.

Studying models of influence in social networks helps to understand how people’s opinions change, and forecast such changes. This is very relevant when one has to bring a social network to a certain state.

There are four approaches to studying models of influence. The first is the structural one: we perceive users that are involved with the biggest amount of other users or communities that are the most influential. We can also say that the users, or vertices of the network, that have the minimal average distance to a maximum of other vertices, are the more influential ones. And there’s also the betweenness property, meaning that the vertice that has many ties with other vertices will be more influential.

The second approach, which is based on modeling of information processes, can be used to define the significance of different users in forming the opinion of a particular user. The third is based on machine learning methods. There’s the Klout company that computes the leverage of all users of social networks. In order to do that, they gather various data: the amount of friends, posts, comments, and such. Then, they take polls amongst other users, where those are to choose the most influential user from the ones they have gathered data on. By comparing the poll results and the data, the company specialists teach a neural network to define the most influential users.

The final approach is based on analyzing the users’ activity: comments they’ve written, posts they’ve liked and so on. Here, we derive certain regularities, so that we can compute the possible consequences of such actions. What is more, we can study particular kinds of data, like data that has to do with cats, or study initial data only in order to study what kind of data can set off a particular chain of actions. For one, we’ve conducted a study amongst 900,000 users of social networks and found out that it is the 2% of most influential users that shape 98% of the process of forming opinions.

Svetlana Bodrunova, professor at St. Petersburg State University, explained why opinions formed in social networks can’t be analyzed based on the amount of likes to particular posts.

There are generally two concepts of how opinions in social media develop: one is that it is the social media that separate people in groups that exhibit prevalent opinions, and suppress other opinions, and, vice versa, that social media act as platforms for discussion and opinion exchange. The aim of our research is to understand  how exactly people form their attitude towards different phenomena in social networks, which is relevant for such fields as politology, sociology and marketing.

When we say that users differ in their opinions, we are often talking about particular polarization - that there exists a clear separation: certain ones are for something while others are against it, and so on. And many researchers are fine with such a simple clusterization. In certain cases, they build it upon some users following Trump (making them pro-Trump) and others - Hilton (which automatically makes them pro-Hilton). Another good example is when every subscriber of TV Rain (a Russian independent television channel) is considered a member of the opposition.

Still, if we were to look at texts by real people and apply semantic analysis, it would become apparent that users usually don’t bluntly express their approval or disapproval of particular events or people. This is why context is very important when trying to learn one’s real opinion. People can cover their opinion on several political figures in a single post, which is why using simple methods as name lookup can mess up the analysis. Also, users can express both positive and negative opinions in a single post, like “I don’t support her migration policy, but I like Merkel’s other policies”. So how does one assess such an opinion?

All of that speaks in favor of a complex approach to texts. For one, we’ve analyzed users’ opinions on three different conflicts in three different countries. The conflicts were to have common features: be either ethnic or racial, have to do with violence, cause heated discussions in social networks, provoke people to protest, and imply the state’s participation in their resolution. For Russia, we picked the 2013 Biryulyovo riots, for Germany - 2016 New Year's Eve sexual assaults in Germany, and for the USA - the 2014 Ferguson unrest. We chose the most influential users who expressed their opinions, and grouped their opinions according to particular features. The results we got were quite unexpected.

In Russia, we got two highly polarized groups: one supported the government’s viewpoint, and the other didn’t. In Germany, the opinions divided in a more classical manner: there were people who supported the migration policy, those who didn’t, and a third group that expressed their discontent with migration policy but expressed their support towards Merkel in general. In the USA, the results were even more interesting. We got two “leftward” groups: the more politicized one that mostly consisted of black people and focused their attention on racism, and the other group that brought up the issue of human rights violations. There was also the minority that spoke in defense of the white police officer.

Ekaterina Bakshutova, professor at Samara State University, expanded on the methods for manipulating public opinions in social networks for the purposes of peaceful de-escalation.

People tend to overestimate the subjectiveness of their opinions. In truth, the meaning of particular events is decided upon by the major community that we exist in; as for us, our choice is whether to accept it or not. So, a question arises: how many opinions are there  that we can truly call ours?

The psychology of large groups can be effectively studied via language, texts included. We started our research with analyzing the texts of the Russkaya mysl magazine that existed in the late 19th and early 20th centuries.This was a unique undertaking, as we aimed to learn the attitudes and topical preferences of people long gone. Our analysis showed how the psychology of a large group of people, the liberal “intelligentsia”, developed. All of them supported ideas that are now attributed to the fifth column: antipopular, antigovernment and antireligious  sentiments. So, we took a poll amongst our contemporaries where we asked them to combine the existence of this group with a certain time period. It turned out that most people believed it to have always existed, regardless of the historic period.

As for analyzing modern texts in social networks, one has to remember that a user’s behavioral pattern largely depends on the context. This means that in communities of people who support certain politicians, most posts will appeal to vote for them. Research on the techniques for analyzing such scripts can make manipulating collective consciousness possible, which can be used for shifting public opinions towards certain ideas in order to promote peacebuilding.