The past Sunday, April 7, ITMO University hosted the finale of the ITMO-VK competition held by the popular social network VK. More than 5,000 school students from 60 regions of Russia and the neighboring countries took part in the competition from the comfort of their home. On April 5-7, the 351 participants who passed into the final round came to St. Petersburg to compete for the main prize: 10 bonus Unified State Exam points to be used during admission to ITMO University, as well as MacBooks supplied by St. Petersburg City Administration, tickets to this summer’s VK Fest, and other gifts from ITMO University. 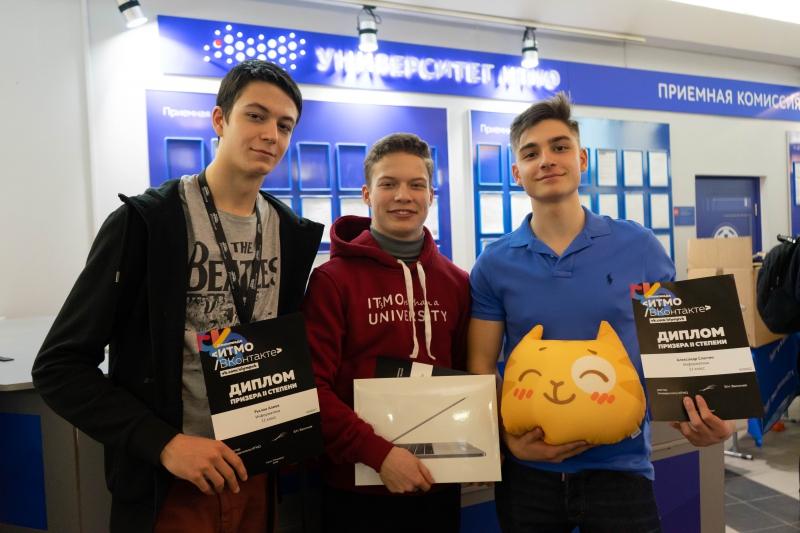 Winners of the ITMO-VK competition

This year’s joint ITMO-VK competition has been held for the third time. Just as last year, school students of grades 7 to 11 who wished to participate needed only to join the competition’s official VK page, fill out a form, and begin solving the tasks.

The competition consists of two rounds: first, the students take part in a remote round, which this year took place from February 1 till March 10. Then, those who demonstrated the best results were invited to come to St. Petersburg, where the second round was held at ITMO University on April 5-7.

The participants were not limited in the number of subjects: if one had wanted to tackle several areas, they were free to do so in the qualifying round. During the second round, the conditions were different: each participant was given six hours, of which they could spend no more than two per subject.

ITMO University also provided travel grants to the participants from other cities who picked the most subjects and acquired the most points during the qualifying round. This year, there were five such students hailing from from the Arkhangelsk Oblast, the Khabarovsk Krai, the Krasnoyarsk Krai, the Saratov Oblast, and the Republic of Tatarstan.

In addition to taking part in the competition, the participants of the second round also went on an extensive tour of the city. After visiting ITMO University’s research labs where they learned about ITMO’s main areas of study, they were shown around the landmarks and sights of St. Petersburg. On the final day, Mikhail Kurushkin, an associate professor at ITMO’s ChemBio Cluster, spoke with the participants about the chemical industry and its future prospects. The students also met with Aleksandr Kapitonov, an assistant at the Department of Control Systems and Informatics, who told them about robotics and the key platforms for online education and professional development.

Out of 5,600 participants who had signed up for the competition, 351 passed into the second round. Their solutions to the tasks were assessed by a specialized automated system, while those who picked the subject of English language were to submit a written essay for evaluation by an expert committee. As Alexey Itin, the chairman of ITMO University's Admissions Committee, said, the three most popular subjects among the students were computer science, mathematics, and the English language.

At the end of the second round, 55 third-tier and 35 second-tier runners-up were determined. The six students who showed the best results in two subjects at once were named as the winners. Among them was Ilya Kaliya, an eleventh-grader from the Derzhavin Lyceum in Petrozavodsk (Republic of Karelia), who succeeded in physics and the English language.

“The winners were given great laptops, but what matters most to me isn’t the MacBook, but the 10 bonus Unified State Exam points. I plan to apply to ITMO University because it’s one of the few universities that promote themselves as a brand in the field of education and it’s easy to find information about it. It’s an open university that’s making a name for itself. It was my mother who advised me to take part in the first round; otherwise I would have missed my chance. I’d like to study photonics and optical information technologies; right now I’m studying with a physics tutor to prepare for my state exam. Now that I have these 10 bonus points, my chances of getting into ITMO are higher, and that brings me joy,” he says.

As many other participants note, taking on several subjects severely improves one’s chances of winning. Anastasiia Bauman, an eleventh-grade student of the Lyceum “Physical-Technical High School” (St. Petersburg), tried her hand at four subjects and was named a third-tier runner-up in one: physics.

“I learned about the competition during an Open Door Day at ITMO University’s Information Technologies and Programming Faculty. I had expected to win in the English language category, but not in physics. Many graduates of my Lyceum have enrolled into universities with the help of such competitions; these 10 points will be a great help for me. What matters most is that this valuable bonus is granted to all winners and runners-up regardless of subject. I want to study communication technologies, and even though those programs do not require English or physics, they call for mathematics and computer science, so I’ll be able to add my 10 points to those scores. As for where I’ll be applying, right now I’m considering ITMO University and the Higher School of Economics.”

The six absolute winners of the ITMO-VK competition received MacBooks as a prize from the St. Petersburg City Administration. Other prizes included tickets to VK Fest and ITMO merch.