ITMO Open Science at Erarta: From MegaBattle to Open Talk

On February 8, ITMO University hosted the ITMO Open Science Conference. Dozens of ITMO University’s researchers, PhD students and heads of the University’s departments gathered at the Erarta Museum of Contemporary Art to discuss the latest achievements in an unusual format and learn about their colleagues’ science development strategies. ITMO.NEWS publishes the highlights of the event. 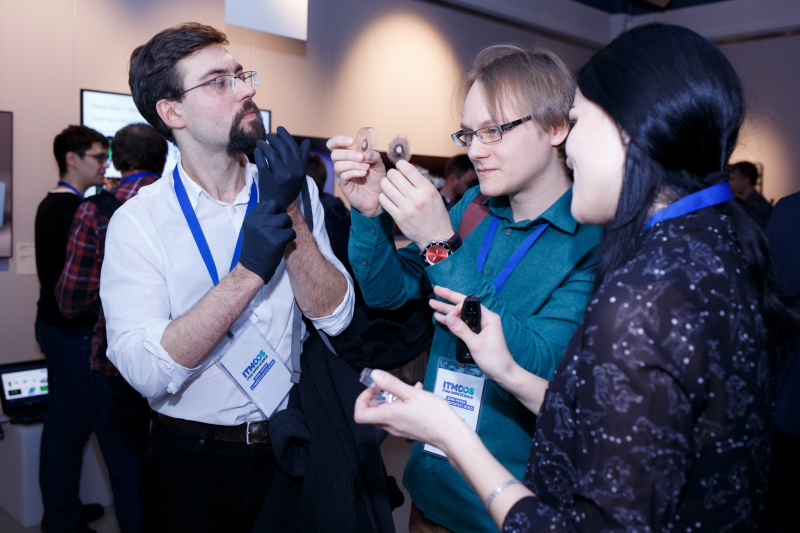 ITMO Open Science is a scientific conference whose main mission is to provide a platform for efficient communication and knowledge exchange between the University’s schools and faculties.

Any ITMO University staff interested in research, be it a department head, a Master’s or a PhD student, could partake in the conference, share the results of their projects and establish new partnerships. The selection process was carried out by the program committee.

Such conferences have long been held in many leading universities abroad. For example, MIT regularly organizes such meetings to give their staff an opportunity to share the results of their work in an informal setting. The Australian National University hosts the annual Founder’s Day conference, which provides the university’s staff with a platform for dialogue and cooperation. Based on these examples, the coordinators of ITMO Open Science decided to organize an event that would incorporate a scientific conference, an interactive section with electronic banners, and a series of reports and interviews.

The ITMO Open Science program included several sections, each with a different format and focus. The conference started with a MegaBattle, where the heads of all ITMO’s schools shared about their major achievements over the last year and talked about their departments’ science development strategies.

The next section, Power Pitch, featured a series of short three-minute reports covering the most significant achievements of each department. For example, Alexandra Nenko, an Associate Professor of the Institute of Design & Urban Studies, talked about an ‘emotional urban landscape’ and how to study it; Andrey Gleim, Head of the Laboratory of Quantum Informatics, presented the results of his research into quantum communications for cyber-physical systems; Sergey Makarov, Head of Laboratory of Hybrid Nanophotonics and Optoelectronics, shared about what material is equally suitable for a solar cell, a lamp, and a nanolaser, while Elena Koshel, an Associate Professor at ITMO’s Chem-Bio Cluster, talked about how to survive after the ‘microbial apocalypse’ and presented the latest projects carried out by the SCAMT Laboratory.

“When we just learned that we would only be given three minutes to talk about our projects, we didn’t really know what to do. However, all the speakers did a very good job, and all was cool and dynamic. I really enjoyed it. It’s amazing how many topics we covered in such a short period of time. I think that it’s a very interesting format and we should continue using it in our future events,” commented Elena Koshel.

A total of 28 reports by the representatives of all ITMO University departments were presented in the Power Pitch section. Among other participants was Head of ITMO’s Science Communication and Outreach Office Dmitry Malkov, who talked about the importance of sharing the results of your research on social media.

After each series of reports, the conference’s participants were offered to visit the Future Now section, during which over 50 participants presented their electronic banners, as well as the prototypes of their own innovative projects. The main objective of this section was to give the participants the opportunity to get an insight into the latest scientific developments and ask all their questions regarding the technologies on display and even test some of them.

For instance, one could play the Shadow Samurai game, developed by a group of ITMO students together with the TAU Tracker company. The game uses motion capture gloves and was presented for the first time at the annual Consumer Electronics Show (CES) that was held in Las Vegas in January (you can learn more about the game here). Apart from that, all the sections were interspersed with guided tours of Erarta, one of the biggest museums of contemporary art in the world.

The final section of the conference was called Open Talk and featured an interview with ITMO University Rector Vladimir Vasilyev.

The discussion at Open Talk revolved around the planning solutions for ITMO University’s new innovative cluster ITMO Highpark, the development of NTI centers, and the prospects of online learning, among others. Besides, Vladimir Vasilyev explained his take on the university’s strategic development plans.

“Five years ago, in 2013, we set a goal to achieve global recognition in a very short time, by 2020. Already now, some of our indicators exceed all expectations, such as the number of publications in the world’s leading scientific journals. Now we know what it takes to stand out in the global market. In my view, it’s not universities who compete there right now, but ecosystems that arise around universities. And that’s what we should focus on,” shared Vladimir Vasilyev.

According to Vladislav Bougrov, the ITMO Open Science conference really fulfilled its mission, creating a platform where ITMO researchers and lecturers could share knowledge and establish useful connections.

Alexey Slobozhanyuk, Head of the conference’s program committee and Research Associate at ITMO’s Faculty of Physics and Engineering notes that this new format has already demonstrated its efficiency and thus has a great potential in Russia.

“First and foremost, I’d like to thank all my colleagues who did their best to help me bring this idea to life. I’m also very grateful for the freedom we were given here at ITMO. I heard many people saying that three minutes aren’t enough, but it all went well, and the participants really enjoyed it,” says Alexey Slobozhanyuk.