Council for the Development of Digital Economy at ITMO University: Online Education and Russian Universities in Global Top-50

On March 26, ITMO University hosted the third session of the Council for the Development of Digital Economy at the Federation Council of the Russian Federation. At the center of discussion was the topic “Human Capital as the General Asset of Digital Economy”. The event’s speakers and participants discussed the training and retraining of human resources in the framework of the Digital Economy national program. Particular attention was paid to the issue of regional involvement in the development of human capital for the digital economy, as well as providing Russian citizens with opportunities for lifelong study and avoiding the risks related to the automation of economy. 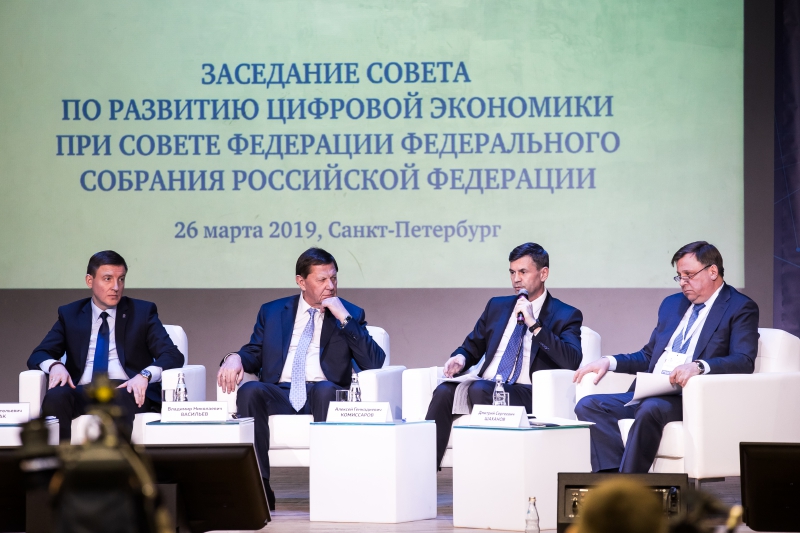 Among the latest session’s participants were the representatives of: the Talent and Success Foundation, the ANO Russia - Land of Opportunities, Russian Railways, Russian Post, and various universities and commercial organizations. Also present was the acting Governor of St. Petersburg Alexander Beglov.

According to the World Economic Forum, Russia is ranked 4th in the world by its amount of human capital, but only 42nd in terms of that capital’s actual use. According to Andrey Turchak, the deputy speaker of the Federation Council, development of human capital entails not only the education and training of human resources but also encouraging them to stay in Russia and attracting new human resources from abroad.

“We wish to see our educational institutions among the leaders of global rankings. Our goal is to have at least five Russian universities enter the global top-50 universities in the field of digitalization by 2030. Our task is to develop a strategy for achieving that goal,” said Andrey Turchak.

One of the conditions for getting Russian universities in the leading positions in global rankings, according to Mr. Turchak, is increasing their online digital presence. That includes hosting their own online databases, online courses, and regular web conferences. It’s also important to maintain the relevance of federal educational standards, especially those that concern IT and cutting-edge tech education.

During the session, the participants had pointed out the need to erase the lines between the different levels of education and create an opportunity to form educational programs out of internationally available courses. One possible solution was an initiative for the creation of a federal open-access storefront or marketplace of educational online programs that would provide Russian citizens with an opportunity to build their own professional development paths using private and state educational services.

Another key proposal at the Council concerned the protection of citizens from job loss risks associated with the robotization of the economy by way of expanding the Human Resources for Digital Economy project with an event on mass retraining of personnel being made redundant due to the development of digital technologies and automation.

Regional ecosystems of continuous education could become a potential tool in the development of digital industries. Such a system would provide citizens with the opportunity to choose educational programs and institutions to continue training throughout their life without incurring significant expenses. An important element of this system would be the use of digital certificates. It is expected that in the period of 2019-2024, at least one million citizens will complete digital literacy programs using personal digital certificates.

During the session, ITMO University’s Rector Vladimir Vasilyev spoke of the university’s Center for National Center for Cognitive Technologies, which functions as part of the National Technological Initiative, as well as ITMO Highpark, the university’s planned second campus. He reported that the University’s administration is planning to triple the presence of international specialists and students at ITMO by 2024.

“ITMO University understands the risks and the opportunities offered by digital economy. That’s why we conduct ourselves by the ITMO Code, the University’s unique strategy, in which we’ve expanded the concept of fundamental values with with entrepreneurial culture, design thinking, and digital culture. We share our understanding of digital culture not only with our students and postgraduate but also with schoolchildren and the retirees who, too, study at the university. Moreover, we plan to propagate the understanding of digital culture all over Russia, and our modular Digital Culture course is designed to be as basic or advanced as required. We employed blended learning technologies to allow students to study the material online or in person, and have made it available in two languages,” shared Vladimir Vasilyev.

The head of Talent and Success Foundation Elena Shmeleva shared her experience of developing the talents of children and youth through the SiriusOnline platform, which launched three years ago. In that time, the platform has provided a unified educational space for children, tutors, and partners. It provides students with intensive subject-oriented educational programs up to 120 academic hours in length for highly motivated students, while the course system allows users to decide on their individual educational track.

The first two sessions of the Council had been held in the cities of Kaliningrad and Novosibirsk. The decision to hold the event in different cities was made in order to let participants learn more about each area’s best practices and projects in the field of digital economy.