Tatiana Gusinskaya has just completed her studies as a Bachelor’s student at the Faculty of Biotechnology. Her Bachelor’s thesis “Plant Protein Encapsulation” earned her an excellent grade. Tatiana has a background that shows her as a hard-working person. She transferred to ITMO from another university with excellent grades. Tatiana started her studies in a non-state-funded place, but she later transferred to a state-funded place based on her excellent academic achievements. While Tatiana was still working on her thesis, we talked with her about her program and the life of a student at ITMO University. 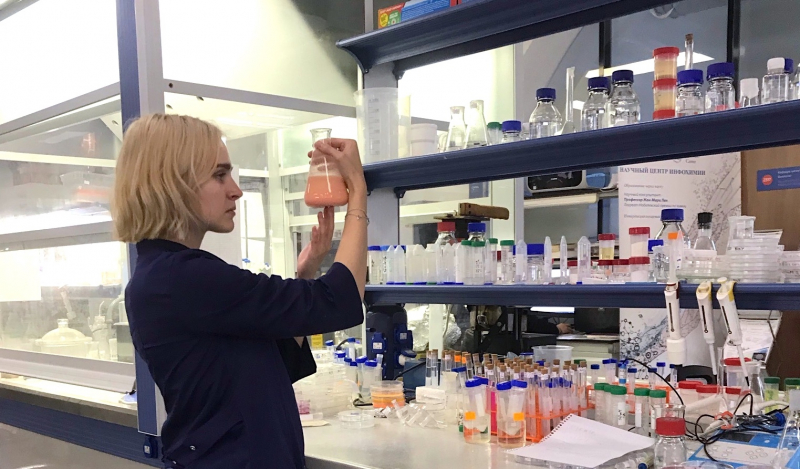 Tatiana’s major is all about food standards and food safety. Her class had a lot of lab work devoted to testing the quality of products. They received all the special skills they would need as a process engineer at the plant. Actually, some of her friends and classmates already work at factories and love it.

Tatiana has wanted to get her Bachelor’s degree at ITMO University since high school. She liked math and wanted to receive technical education. That’s when Tatiana realized that ITMO University is a good choice for her. But she still needed to choose one more subject to pass the Unified State exams and she chose chemistry. With this set of subjects, she could apply to study oil production, pharmacy, or biotechnology. Biotechnology was just right for her, but unfortunately, she couldn’t make it to ITMO University on her first try. However, she never gives up. She completed her first semester with excellent grades and then applied to be transferred to ITMO University. It worked out!

For Tatiana, the most exciting thing about food biotechnology has always been the possibility to create something real, something you can touch and actually taste. She believes her program is great for prospective process engineers. They had a lot of laboratory practice during their study but that’s just one of many advantages. They also had an opportunity to see how different factories function. They had tours at facilities when they were in their second year of studies and that was an important experience. Another advantage from Tatiana’s perspective is that ITMO is a large university with many partners. It makes it easier to start your career while you're a student.

Talking about the disadvantages of her program, Tatiana mentioned the fact that a lot of their subjects are devoted to dairy products, and they have a few lectures about other types of production. But still, for her classmates, it wasn’t hard to find a job –  they quickly adapted to a new type of product.

Even though Tatiana realized that the food safety organization was not for her, she doesn’t regret the years spent within the walls of the university. Tatiana loves ITMO, and she is very grateful for all the opportunities ITMO gave her. She feels like ITMO is one of the universities that care for their students. For her, it is all about “creating great opportunities for people who can change the world in the future”.

Tatiana has been an active student throughout her student life. She participated in a volunteer project called Buddy System. It is a project that provides interaction between international and Russian students. It helps international students with all matters concerning adapting to life in a new city.

Another opportunity that ITMO University gave Tatiana – is the opportunity to take part in different research in the Infochemistry Scientific Center (ISC) under Ekaterina Skorb, director of ISC at ITMO University. This experience gave her knowledge of how to work with the newest lab equipment and allowed her to explore different kinds of studies. But the most important thing that Tatiana gained from her experience is learning from the example of how people in the scientific world work. That gave her an understanding of what she wants to do and all the necessary skills to get a Master’s degree in her desired field.

Tatiana has now graduated from ITMO but hopes to continue her studies in the field of cytology.