Every year, ITMO’s most active students go to different parts of the world in order to do internships at the world’s biggest companies and universities, or explore new territories as volunteers. Student internships have long become not some boring compulsory labour but rather enticing adventures that can give you unique experience. In an interview for ITMO.NEWS, students speak about this year’s most interesting internships and volunteering projects. 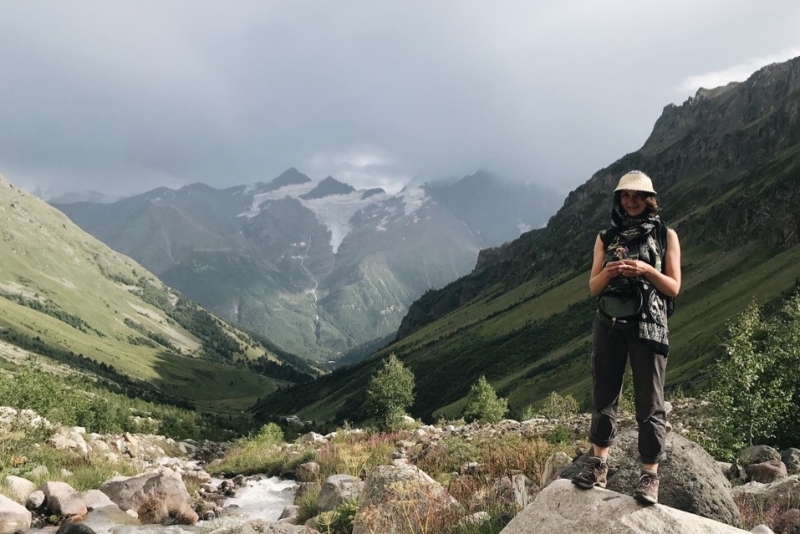 I’ve been wanting to do some ecological volunteering for a long time: clean up, plot tourist trails, develop infrastructure. Nowadays, we have ecovillages where volunteers can do field work, tend to cattle and help around the household, and I really like this idea. I started monitoring the offers on GoodSurfing. There, I found a major project called Ecodemy that was initiated by the Ministry of Natural Resources and Environment. 12 nature reserves participate in this project, and you can go to any one of them. The trip’s program includes two aspects. The educational aspect has you learn about a region and the scientific, ecological and preservation activities of a particular nature reserve. The other is the ecological aspect that involves cleaning and monitoring the territory of a nature reserve, or plotting tourist trails. Around Mt. Elbrus, for instance, the infrastructure is well-organized, but littering is a problem, so we focused on that.

My shift lasted for a week, as I wanted a short trip, but volunteers can stay for several shifts in a row. The accommodation and mountain climbing expeditions were paid for by the organizers; we just had to pay for our trip to the place. During our stay, we followed a strict schedule: we got up, I’d go for a workout (we lived at a sports base), then we went to clean the litter and monitor the territory. Monitoring a nature reserve’s territory is important, as it helps combat illegal activity. For instance, we found a hunting lodge, the remains of a bonfire, people who gathered mushrooms and berries for commercial purposes - all of that is prohibited on the reserve’s territory. Our curators notified the people responsible for particular plots about our findings. After cleanup and monitoring, we went to the faraway, non-tourist places, where there are waterfalls and the nature is really beautiful. Curators spoke to us about the local climate, waters, and the glacial melting problem.

As I was over there, I noted a few reasons why someone would go on a trip like this. Firstly, the aesthetics, the stunning nature and impossible beauty of it all. Secondly, I liked everything that had to do with water. On the whole, our trip focused on two things: Mt. Elbrus, a popular tourist destination, and the local waters. There are several rivers that flow from River Elbrus. They also have medicinal mineral water there (narzan). It was for the first time for me in Russia that I could drink water straight from the tap. The glacial melting problem was a hot topic, as well: the locals are very concerned about it. According to their observations, the situation has changed greatly in the last 30 years. Glaciers melt, and cause many problems. For example, this recently led to fatal casualties when a melting glacier broke a gas pipe, and people got poisoned. Nowadays, the nature reserve is looking for ways to prevent such accidents.

As a science communicator, I was very interested in research activities conducted at Russia’s nature reserves. In this sense, I made the wrong pick: all the research institutions in the vicinity of Mt. Elbrus are very reserved. For example, the Baksan Neutrino Observatory is located on the nature reserve’s grounds, but you can’t get inside. There are also laboratories where they study the effects of high altitudes on human physiology, but they don’t welcome visitors either. I suppose the situation is different at the Pribaikalsky National Park where research teams are bigger.

I want to continue focusing on the topic of Russia’s natural reserves; still, I believe that their activities should focus on not just preservation, but research as well. The place I’ve been to has few communication tools and platforms, namely only a website which is not really effective. Unfortunately, they don’t even have an Instagram page, which they absolutely need. I would have put in more effort into communications, taking interviews with scientists and writing about research. Mt. Elbrus is one of Russia’s gems, and it would have been great if people wouldn’t just come there as consumers, but combined leisure with other kinds of activities like visiting laboratories, collecting litter and such. This place is really beautiful, but lots of people are still indifferent to it.

I learned about the internship from a mailout in ISU (ITMO's internal communications system -- Ed.). Aalto University offered internships in over 20 projects in different fields of science; you had to choose two or three that you liked most and write a motivational letter. The internship lasted three months, from June to August. I worked as a research assistant and conducted experiments as part of the chosen project. As I focus on physical chemistry, I chose a project on extracting metals.

There weren’t many people at the laboratory in the summer. Each student or staff member had their projects which they worked on by themselves. I worked with a professor who set tasks for me, conducted the necessary experiments, and then we met to discuss the results. I had to mostly work alone, though the laboratory’s members were always eager to help. The schedule was different from what I was used to in that the time for rest and work was strictly regulated. If you failed to finish some experiment within the given time, wanted to stay late or come work on weekends, you were out of luck; after 15:30 the entrance to Faculty and laboratories was closed.

This was my first international internship, so everything has been interesting to me, especially the different approach to organizing the work and schedule. Aalto University has an international team, so I also got to communicate with specialists from different countries. On the whole, it has been a great experience that let me understand how to develop further.

From mid-May to the middle of August, I did an internship at the Max Planck Institute of Colloids and Interfaces. I went there thanks to my research advisor Ekaterina Skorb. She had been working at this institute for a long time, and after she moved to Russia her laboratory conducted many research projects in collaboration with our German colleagues; my internship had to do with one of those.

I worked on a project in the field of microbiology. Many bacteria today have begun to develop a resistance to antibiotics Therefore, “reprogramming” bacteria instead of just eliminating them has become a really relevant topic. My tasks included selecting chemical compositions that we could use to modify surfaces that we grew bacteria films on. Three months were barely enough for such a project, so I spent most of my time on laboratory work. Following a tight schedule proved very productive, and I produced some good preliminary results.

In late May, right after my arrival, the department I came to had a field section. We left the city for five days, and attended workshops and lectures; this was a great opportunity to get acquainted with my new colleagues and spend time outside. My research adviser from the German institute helped me adapt to the work process of their laboratory, and was always ready to answer any questions I had. Max Planck Institute of Colloids and Interfaces is located in Potsdam, which is not far from Berlin, so I also got to get to know Germany’s capital better. So far, this has been my first long trip abroad, and it was certainly a success!

My internship in Canada isn’t over yet; me and my colleague Yana Ugai will be staying here till the end of September. We are both students of the ITMO’s Biochemistry Cluster, where we work at the Laboratory of Ceramic and Natural Nanomaterials under the guidance of Pavel Krivoshapkin and Elena Krivoshapkina. It was them who advised us to do an internship in Canada. For the past year, we’ve been studying the peculiarities of nanoparticle synthesis and its applications, so we were glad to strengthen our knowledge by going on an international internship. Our internship at the University of Waterloo is four months long; we work at a laboratory studying nanocatalysis.

Each of us works on her own project under the guidance of a supervisor. I continued an unfinished Canadian project on synthesizing gold nanoparticles that can be applied in the fields of biosensing and theranostics. It took me quite some time to get a sense of it, but this is what working on unique topics is all about! In any case, we’ve been diligently working throughout the summer, and got to master new methods and equipment.

Such an experiment gave me an opportunity to compare the work processes in Russia and Canada. People here are very welcoming and communicable, and are always ready to help. Still, Canadians have a deep sense of social justice, and if they think that some actions trample the rights of a particular person, they will report it to a responsible authority. For instance, if you want to use some equipment, you have to do it at a particular time, and any attempt to use it saying something like “I only need five minutes, can you please wait?” won’t do and are perceived as a sign of disrespect. Personally, I never had such sort of trouble, but I’ve been advised to pay a lot of attention to these issues.

The Canadian university is full of contrasts, and conducting research here implies communicating with people from different continents, cultures and social circles. Here, you learn diplomacy, discreteness and self-confidence. This has been my first experience of this kind, and it was truly priceless, especially the notion that as a researcher, it is you who are solely responsible for your actions. An internship can help you broaden your horizons, and make you proud of the things you’ve learned.