Virtual, augmented and mixed reality are among today’s most promising technologies. Despite the growing popularity, one can get a free introduction to this field at one of the world’s best universities, Oxford Brookes. Yulia Trushina and Alena Jigalova, ITMO Master’s students from the Multimedia Technologies, Design and Usability program, who recently participated in this educational course, share their experience. 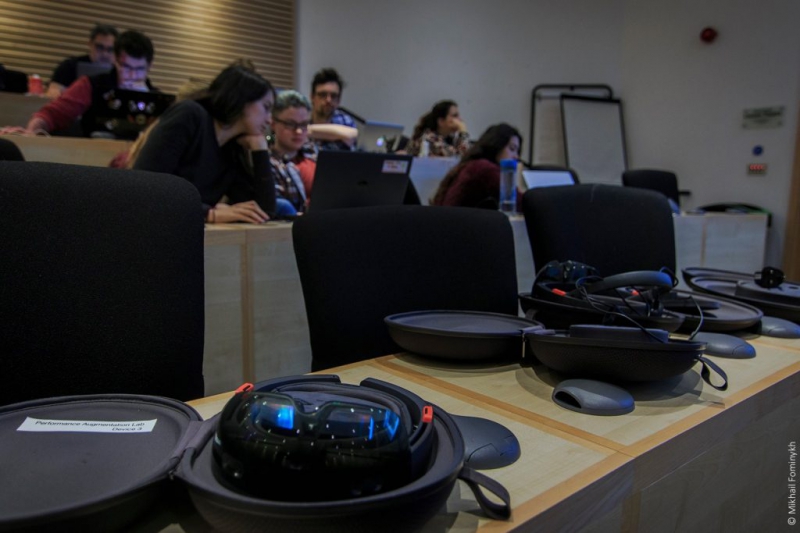 How did you join the course?

Yulia Trushina: At the start of this year, we saw an announcement on ITMO’s website about applying for a course called “Augmented Reality” at Oxford Brookes. All we had to do was fill in the form, write about our experience of working with augmented reality, our motivation to do that and just wait. On the following day, they sent me an invitation, and so I started working on getting a visa and gathering other essential documents.

Alena Jigalova: Truth be told, getting a visa and completing the necessary paperwork seemed a lot harder than applying for the course. We had to prove our knowledge of English, and gather lots of documents confirming that we are students, that we have somewhere to go to and that we have the funds for it. Actually, we weren’t sure that everything will be ok till the very last moment: I learned that I got a visa just two days before my flight. So, we were really anxious, and risked a lot. But that’s not really important, because we got to study at Oxford Brookes.

Tell us more about the course.

The organizers call the course “The First School of Augmented Reality”. It involves three months of online education for students from different countries, and a week of intensive training at Oxford Brookes. During the on-site training, the lecturers focused on multiple subjects: they gave us a comprehensive introduction to the technology, explained its current applications, prospects of use, and different aspects of human perception, as well as human-computer interaction, issues of teamwork, and a lot more.

Alena Jigalova: We also got lectures in 3D modeling, animation, programming and mathematics. Apart from Oxford Brookes professors, we were also instructed by invited lecturers. At the end of the week, representatives of Microsoft came to the university to tell about their new HoloLens headset. What’s more, we were given these headsets for the whole week so that we could study their capabilities.

Yulia Trushina: They used special software and cameras to scan every participant in 3D, and created models with photorealistic textures. We used them during our practice: adjusted for deficiencies in models’ geography and textures, prepared them for use in AR, and animated our copies. What’s more, we created mobile apps that show the animated model when your camera captures a marker image. Now, I can always look at my virtual copy that’s dancing atop of a marker.

Alena Jigalova: Another benefit was working in teams. Together with students of Oxford Brookes, we discussed ideas for applications, and had brainstorming sessions in order to get to know each other and dismantle the language barrier: at first, it was hard to even follow their speech.

Yulia Trushina: It’s worth mentioning that studying abroad, where nobody speaks Russian, is a very useful experience. At first, you have to really focus in order to understand others, especially your lecturers. And eventually, you notice that you’ve learned to easily understand English speech.

What about the differences in the educational process?

Yulia Trushina: At Oxford Brookes, there’s no distance between students and lecturers. Everyone is considered a participant of the educational process, and there’s no hierarchy. For example, while in Russia we have different canteens for students and staff, in Britain you can sit at the same table as your lecturer.

Alena Jigalova: I got into a totally unexpected situation: for the first three days, I communicated with people and we worked as a team, joked and had tea together, and then I saw them giving lectures! And it turned out that they are renowned specialists in their professional fields.

Where did you live?

Yulia Trushina: For the better or worse, they couldn’t give us rooms at the dorms, so we lived with the locals. I lived not far from Oxford in a place called Wheatley; the university campus was a ten minute walk from there. The family I stayed with were great: very hospitable and caring, they told me what to see in Oxford and Wheatley, and invited me to their family dinner a couple of times, which was very nice.

Alena Jigalova: I lived in Oxford, with Francesca, daughter of a renowned local sculptor Michael Black. She was very kind. We had tea together a lot, and on my last day there, she even prepared me a lunchbox as though I was some kid: a sandwich and a couple of fruits.

Apart from me, one Australian doctor also stayed at her house. In the evenings, we spent time together: I told them about life in Russia, Francesca told us about England and Nick about Australia. By the way, he travelled a lot, and lived in the USA for some 20 years. The advice he gave me was that earning money is important, but you also have to think about how you spend it, and the best way to spend money is to travel. He said that he regrets not having travelled even more than he already had.

What was the most surprising thing about living in Great Britain?

Yulia Trushina: Public transport. Their regular buses are those red double-deckers you’ll see in a Harry Potter movie. And they go really fast. There are no conductors, only drivers, and their cabins are equipped with all the necessary technology. There’s Wi-Fi, and each seat is fixed with a USB port. There’s an announcement for every stop, but if no one presses the exit button or no one is standing at the bus stop, the bus just drives on.

Another thing that surprised me is that passersby are very polite and friendly. I asked the way very often. When I was walking around Wheatley in the mornings, every person I met, be it a jogger, someone walking their pet or just standing near their houses said “Hello!” or waved their hands, even though they saw me for the first time!

Alena Jigalova: My most interesting experience in England was a bike tour around London, when the guide showed us the city’s backstreets where real Londoners live. This was a great chance to look at a metropolis from a different standpoint.

What do you expect from Augmented Reality technologies?

Yulia Trushina: There’s been talk about the second generation of the HoloLens headset for quite some time already. During the weekly course, our head lecturer tried to learn anything about the novelty from the representatives of Microsoft, but they only smiled.

It turned out that he just had to wait a bit: Microsoft officially presented the new device around the end of our course. The new headset will make it possible for people to communicate online with a virtual avatar of another person, and manipulate 3D objects using gestures, much like in the movies. Microsoft hope that the new device will also find more applications in such advanced fields as medicine, aircraft engineering and the like.

One of Microsoft’s representatives told us about their company’s special strategy. In the last century, Bill Gates said that there will be a computer on every desk, and in every home; now, the company expects that every home will have an AR headset. Today, the technology is quite expensive, but in future, it can well become most widespread. The only issue here is accessibility.

Do you have ideas for projects of your own?

Yulia Trushina: At the last brainstorm when participants proposed and discussed ideas for apps, I thought that we could use AR for working with programs that have to do with 3D graphics. Instead of sitting in front of a monitor and using a mouse, people would just put on a headset and do the same things with the help of gestures.

Alena Jigalova: Our colleagues from Oxford Brookes proposed applications that mostly had to do with entertainment, like AR games or reading apps. They are currently continuing the course and developing their solutions with the help of HoloLens.

At the beginning of the interview, you said that you had to file an application to participate in the course. What did you write for your motivation and experience?

Yulia Trushina: I mentioned my participation in the development of a study guide on AR in a Moscow technopark, and a project that my colleague and I developed together (it was an application dedicated to unique musical instruments). What’s more, my Bachelor’s thesis at St. Petersburg State University also focused on AR. Still, I suppose one’s experience in this field wasn’t that important: some of the participants didn’t have much background in AR.

Alena Jigalova: I got the impression that they enrolled everyone who filed the application on time. Having the right motivation to deal with all the bureaucracy and get a British visa (an official invitation from Oxford Brookes was much help in this issue), as well as being eager to develop in this new field was a lot more important.