On April 18, the results of the Competition of the National Technology Initiative were announced at ITMO University. The event brought together students from St. Petersburg, Moscow, Novosibirsk and Irkutsk, who had three days to solve three tasks focusing on such topics as mathematical statistics, machine learning algorithms, and distributed computing infrastructure. The winners of the competition will receive an opportunity to enroll in one of ITMO’s Master’s programs without needing to take entrance exams, as well as receive a paid internship at the University’s research laboratories. 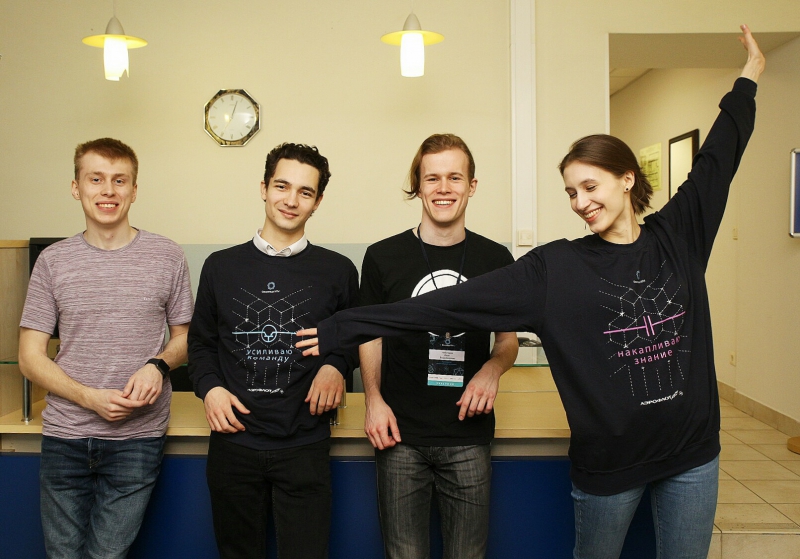 Launched in 2015, the Competition of the National Technology Initiative (the NTI Competition) is organized by the Russian NTI Society, the Agency of Strategic Initiatives for Promoting New Projects (ASI), and the Russian Venture Company in collaboration with leading Russian universities and technological companies. In 2018, university students were allowed to participate in what has previously been a competition exclusive to school students.

Any Bachelor’s or specialist student majoring in a technical field can apply for participation. The competition consists of six tracks: aerospace systems, virtual and augmented reality, intelligent robotic systems, applied artificial intelligence, wireless communication technologies, and technologies of smart cities. Each track is coordinated by a partner university. Participants aren’t limited to one track but encouraged to try their hand at different fields.

The NTI Competition for university students is held in several rounds: first comes the registration, which is followed by an online qualification round. Its winners get the opportunity to partake in the final round held at universities from March to May.

The final round at ITMO University

This year’s competition in the track “Applied Artificial Intelligence” was co-organized by ITMO University’s National Center for Cognitive Technologies. The final round kicked off on April 15 and was held the form of a hackathon. Teams were assigned three tasks involving such topics as mathematical statistics, machine learning algorithms, and distributed computing infrastructure.

The first task was to clusterize texts on social media. The participants were given a dataset consisting of a number of texts on different topics in different languages, in which they had to identify the main thematic groups and describe the nature of the available data. The second and third tasks had to do with forecasting climate change and working with meteorological data.

“The tasks at the competition correspond to the projects that we’re currently working on as part of our research groups. These are indeed very important and topical tasks. For example, machine learning technologies are actively used in the field of advertising, marketing, and recommendation systems. The second task focused on the issue of climate change which is among the most urgent global environmental concerns the world is facing,” comments Amir Uteuov, an engineer at ITMO University’s National Center for Cognitive Technologies, a PhD student at the Institute of Design & Urban Studies, and one of the authors of the tasks. “What is also important is that the conditions the competition’s participants worked in were close to those that real researchers have to deal with”.

A total of 16 students (four teams) from St. Petersburg, Moscow, Novosibirsk and Irkutsk took part in this year’s NTI Competition at ITMO University. According to Irina Deeva, an engineer at ITMO University’s National Center for Cognitive Technologies and a PhD student at the Institute of Design & Urban Studies, apart from solving tasks and presenting the results of their work to the jury, the competition’s participants had an opportunity to attend a series of workshops and lectures. Among the lecturers were Alexander Boukhanovsky, the head of School of Translational Information Technologies and the National Center for Cognitive Technologies, and Georgy Kopanitsa, a new participant of ITMO University’s Fellowship program (ITMO.NEWS published the highlights of his lecture here) to name but a few.

The results of the hackathon were announced on April 18. The first place went to team AltFuture from the Irkutsk State University made up of Zoya Volovikova, Alexander Abdulov, Alexey Bykov, Nikita Gromik and Mikhail Mustakimov.

The winners will get the opportunity to do a paid summer internship at one of ITMO University’s laboratories in the following fields: computer modeling of natural and social systems, infrastructures of global complex systems, computational medicine and decision support systems, algorithms of complex systems, and interactive visualization. Apart from that, Bachelor’s students in their final year of studies are given a chance to enroll in one of ITMO’s Master’s programs without needing to take entrance exams.

ITMO.NEWS met the participants to find out why they decided to take part in the competition and how this experience may come in handy in their future career.

AltFuture, the winners of the hackathon

Our university is also among the competition’s co-organizers, which is why we’d already heard about it before. We participated in this year’s contest in the tracks  “Applied Artificial Intelligence” and “Wireless Communication Technologies” and made it to the final round in both.

We really enjoyed the competition’s tasks, especially the one on analyzing social media data. What is also important is that the event was very well-organized. We see participation in such hackathons as a great opportunity to acquire teamwork skills and work on your own project on a very tight schedule. Though we had already taken part in similar events before, e.g. in scientific conferences, this format is very different from what we had to deal with, as it leaves more room for competition, combined with less time for preparation.

I’ve been participating in the NTI Competition since when I was a school student. This time, we chose the “Applied Artificial Intelligence” track. Why? Because it’s a very interesting topic, and there are not so many events focusing on it.

Such competitions teach you to work on a tight schedule, establish connections, work as a team and delegate responsibility. We really liked the tasks; they were both interesting and rather challenging, especially for freshmen students.

Artem Kolpakov, a student from the Novosibirsk State Technical University:

I also took part in the NTI Competition when I was a school student. This year, we decided to participate in the competition in two tracks: “Applied Artificial Intelligence” and “Intelligent Robotic Systems”.

We found the tasks rather challenging, but they were all very interesting and useful. What I liked the most was that all the tasks were practice-oriented. In my view, the tasks for university students are much closer to real-life tasks compared to those in the track for school students.

Arkady Ilyin and Elizaveta Kozlova, students from the Moscow Institute of Physics and Technology:

The tasks we were given were quite challenging but it’s not something extraordinary for such competitions. Participation in such events helps you learn to work with new information faster, as well as come up with a working decision for a problem in a limited period of time. And last but not least, when participating in such contests, you can understand what skills and competencies you’re lacking and get motivated to acquire them.