A Successful Start: ITMO's Schools, Academies and Centers for Schoolers

At ITMO University, you can train for math and physics exams without a tutor, start learning programming languages, find out more about nanotechnologies, build your first robot and, what's most important, decide on your future profession - and all of that while you're still in school! During the recent ITMO.START festival, children and their parents could learn about such things as training for the entrance exams or one's first steps in serious science. Read more about ITMO's schools, academies and centers that aim to help school students decide on their future professions. 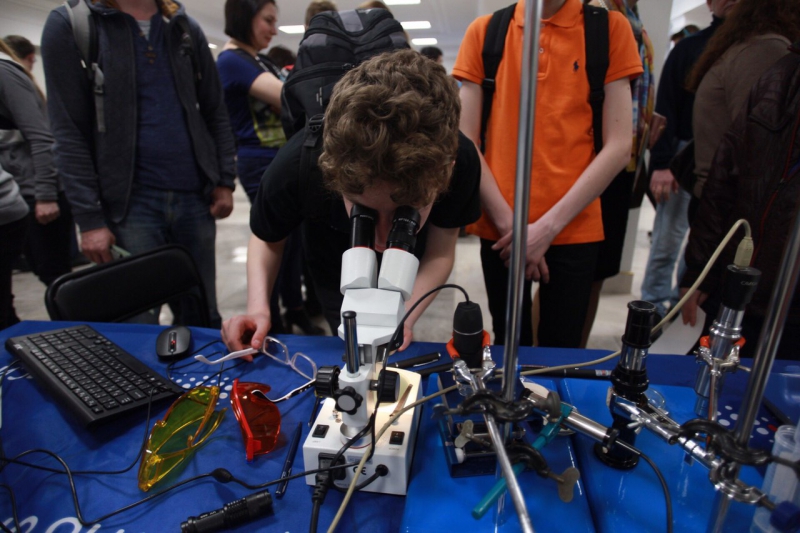 ITMO's preparatory schools and centers are good for both high-schoolers who train for their entrance exams, participate in contests and aim to enroll in ITMO, as well as younger children who are just taking their first steps in science.

What is the point of participating in ITMO's schools, centers and academies?

Studying such programs lets high-schoolers gain advanced knowledge in physics, math and computer science, train for their Unified State Examination without having to resort to private tutors, and get essential career guidance while still studying at school. The students meet ITMO's lecturers, Master's and PhD students, as well as visit ITMO's laboratories.

Younger children get a chance to start doing science on a university level and engage in collaborative programs with ITMO's Master's students, participate in conferences and science events, and use their achievements for their portfolio - for one's individual accomplishments, ITMO University can add up to 10 points to the Unified State Exam score. What does ITMO have to offer?

Each has supplementary education programs that give school students the necessary knowledge. What's more, during their training, the students get a chance to learn more about ITMO - they get tours to the university's laboratories and departments, as well as lectures on career guidance.

Here, students are trained in two fields: robotics and computer science. The school also gives them the knowledge necessary to successfully pass the Unified State Examination in computer science and participate in different contests.

ITMO's Laser Technology School gives highschoolers knowledge of laser technology and optical equipment, as well as gives them an opportunity to engage in real scientific activities: they can develop individual projects and participate in nationwide and international conferences and contests. Diplomas and reports from such events are considered individual achievements which give benefits for entering ITMO University.

The center offers several programs: introduction to computer technologies for beginners (children can enroll to the center once they are nine years old), as well as programs on different programming languages, computer design, animation, modeling, networks, web design, web technologies, game development and many other.

Department of Optical Physics and Modern Natural Science - Physics on the Nano-World School.

The school gives its students knowledge of the fast-developing nanotechnology field, which is yet to be included into school curricula; its program also includes tours to ITMO's International Research and Education Center for Physics of Nanostructures. At the Academy of Computer Science and Programming, ITMO's lecturers and students help schoolers get a deeper understanding of modern software development tools and technology. There are courses on the basics of programming, fundamentals of programming technologies, and programming languages, as well as more advanced programs that have to do with algorithms and data structures.

Supplementary education at the School of Biotechnology and Cryogenic Systems

The programs focus on relevant fields: healthy nutrition, functional products, and modern food preservation technologies. Students learn about biotechnologies, participate in science projects and get a chance to do practical tasks at modern laboratories.

How does ITMO help decide on one's future profession?

ITMO.STEP is a program that offers school students an opportunity to meet the university's graduates, visit its laboratories and partner enterprises, as well as try educational courses of the university's five Schools and special programs on developing communication skills. Another great opportunity to show oneself, develop teamwork skills and participate in real project activities is the People Need You! project contest.

Finally, there's the new ITMO.START project that focuses on career guidance. ITMO.START is like a miniature social network where every user can manage his or her profile and get all the necessary information. After registering, the user can do a career guidance test, and use its results to choose a School at ITMO University and learn more about his or her aptitude and interests. The portal also informs the users of the recent activities at ITMO University - depending on a user's preferences, it will send notice of the upcoming lectures, workshops, contests or Open Days. Participation in such events will earn additional points that he or she will be able to exchange for real prizes: brand goods from ITMO.STORE or individual tours and consultation.