Campus Festival: How to Learn About Science at a Bar

How to discover a platinum field, why scientists can’t replicate more than half of their experiments and what is hidden behind the petroglyphs of North Europe and the treasures of the Hermitage? Last Friday, seven bars of St. Petersburg turned into an educational space for just one night. All in all, 12 lectures were given throughout the city. Vladimir Borisov, postgraduate student at ITMO University’s Department of Photonics and Optical Information Technologies, explained the construction of a laser and the concepts of holographic memory and supercontinuum, while Varvara Lymar, research fellow at ITMO University’s Institute of Design and Urban Studies, gave her thoughts on what could be done with St. Petersburg’s industrial areas. ITMO.NEWS paid a visit to the young scientists’ lectures and found out what a scientific gathering at a bar looks like and why this format is becoming ever more popular. 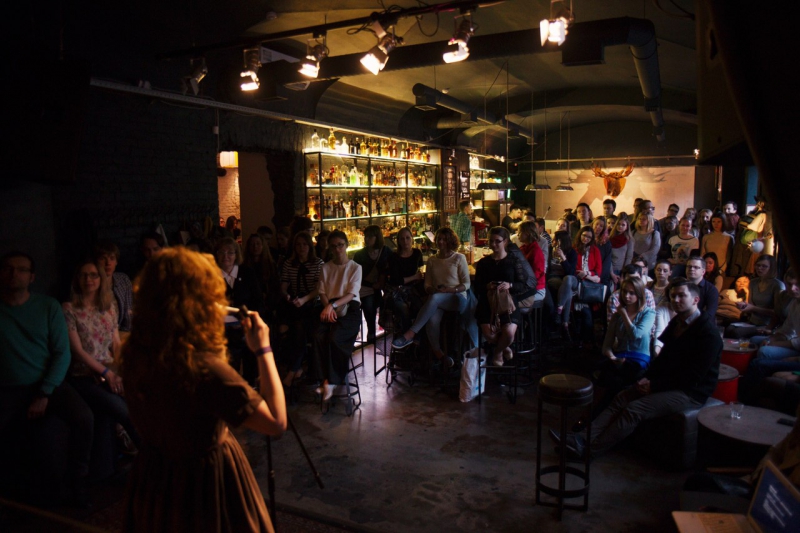 Urban educational festival “Campus” is a continuation of the “Open University” project initiated by St. Petersburg’s top universities – ITMO University, European University and St. Petersburg Polytechnic University – and organized by “Paper Media” since 2015. Its main intention is to educate people on science in an easily accessible format outside of university walls. As part of the festival, any place can become a platform where anyone can acquire new knowledge and meet interesting people.

At “Bakalavriat” bar on Mayakovskogo St., one could find out about the structure of a laser and consider the prospects for development of St. Petersburg’s industrial areas. It was here that Varvara Lymar, research fellow at ITMO University’s Institute of Design and Urban Studies and expert for “Beautiful Petersburg” and Vladimir Borisov, postgraduate student at ITMO University’s Department of Photonics and Optical Information Technologies, gave their lectures.

From holographic memory to issues of St. Petersburg’s “gray belt”

How do lasers work and why are they considered to be the perfect light sources? What are maser, raser, supercontinuum, holographic memory and terahertz scanner? And why is the development of a laser scalpel the best thing to happen to modern medicine? To explain the properties and applications of lasers, as well as the latest scientific developments to both an eight-year-old, a soft sciences student and a STEM major, Vladimir Borisov used simple examples; he’s even explained a few of the terms by grabbing a guitar and playing a few chords.

“The process of popularization of science needs to bring the scientists and the laymen together. Events like these are important because they target an audience that might not know a lot about a certain field of knowledge – those who want to know, but can’t do it yet. In this regard, there are two chief priorities for development: firstly, scientists need to learn how to better present information, make it interesting, simple and captivating. Secondly, people who are involved in these processes need to focus on the audience that isn’t educated on the matter yet, to promote their findings in unusual places and to draw in people who aren’t involved in science. We had a lot of attendants tonight, so, I think, there is definitely potential for more”, - says Vladimir Borisov.

Everyone has encountered a laser in their everyday life, and practically any citizen of St. Petersburg is familiar with the city’s so-called “grey belt” issue. Why are there so many industrial areas in Russia, what can be done with them and can these depressing places be turned into the likes of HafenCity or Vienna’s Gasometers? For the second half of the lecture Varvara Lymar, an expert for “Beautiful Petersburg”, spoke about the issues of St. Petersburg’s modern industrial areas.

In total, 12 speakers spoke at seven venues this Friday. These are employees of St. Petersburg’s universities, founders of high-tech companies, physicists, sociologists, art experts and urbanists; attendants could learn about methods of finding platinum deposits, “learning to study” with open online courses, find out what social media can tell about a person, what Chinese architects think about European buildings and why scientists can’t replicate more than a half of their experiments.

Any of the lectures could be attended without leaving the downtown area. Any listeners were able to participate despite their possible lack of specific knowledge or their age. They spoke to ITMO.NEWS about what inspires them to learn new things from unfamiliar fields of science.

I’m drawn to urban studies and anything related to St. Pete’s; I’m also interested in self-education and online learning. The unusual format of these particular lectures sparked my interest. Usually events like that happen at universities or, for instance, at Alexandrinsky Theatre’s New Stage. And they tend to happen during the day. Here, people can come after work and find out something new.

I’m eight years old, I’m in second grade. I went to Science Slam with my mom and we learned about physics there, which I enjoyed. I’m also interested in other things, like, for example, I want to confirm the existence of rare sea creatures. There’s an animal called a megamouth shark, its maw is the size of this table. I’ve read in a book that a long-tailed creature was spotted near some islands. Nobody knows what it was, but they all claim it was a megamouth shark. I want to confirm that it indeed exists.

I found out about Science Slam last year and about popular science events in general. This isn’t our first time visiting such an event. But when we’re at a regular, classic lecture, he tends not to remember much; here, he listens, understands and then talks about it so you know he learned something. Sitting at a lecture or watching a TV show isn’t as exciting as coming to a lively event like this. In addition, here you have young, but accomplished scientists giving the talks.

These days not everyone finds themselves able to learn about the new technologies and scientific trends from, say, magazines or regular lectures. They are all presented in a specific format that isn’t very accessible or comprehensible to people who aren’t into science. But here, anyone can come regardless of their scientific knowledge and still understand and learn something. I can’t say that this is a particularly popular format – not many people are aware of it yet. But I think that in future it will gain popularity.

As you can see by the number of people in attendance, this format is quite popular and viable. Why? Well, there is even a popular IT-related meme – the "Ballmer Peak" – that refers to the correlation between the quality of code and the amount of alcohol consumed by the coder. Jokes aside, I think the relaxed atmosphere here does help people to absorb information better.

I’ve been to Science Slam and some lectures on popular science. I’m a geophysicist, but I’m interested about various fields – like physics, or, lately, sociology. Lectures like these are great because you can learn about topics you knew nothing about before. At the same time, the information has been made accessible so people can find out new things and enjoy the process. Learning here is easy and fun.