What happens inside our brain in stressful situations? What is the connection between the brain and human needs? How to remain sane during self-isolation? How can procrastination actually be useful? Vyacheslav Dubynin, DSc, professor at the Faculty of Biology of Lomonosov Moscow State University, and a specialist in physiology of the brain, answered these and other questions during an open lecture as part of KSTATI (КСТАТИ) scientific festival by the Network of Nuclear Technology Information Centers. Here are the key points of his presentation. 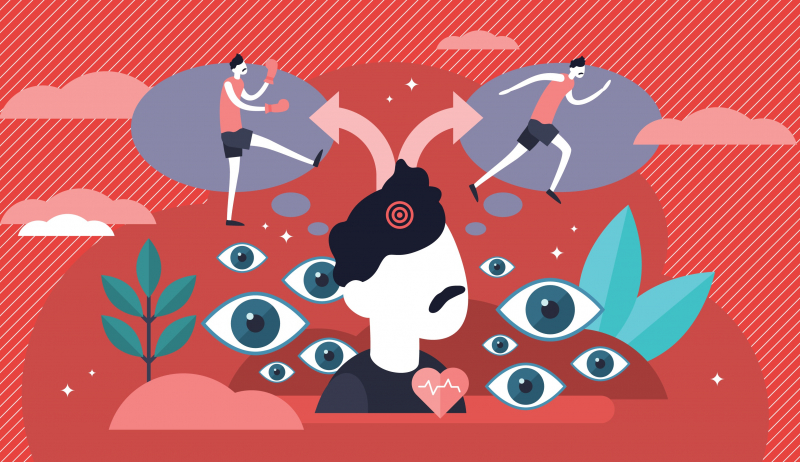 Stress is a general response of an organism to extremely powerful external stimuli. Small amounts of stress aren’t harmful, on the contrary, they may even be beneficial. However, excessive amounts of stress may lead to bodily harm.

Our brain is something like a computer that includes 90 billion nerve cells. Its goal is to respond when danger occurs, calculate possible outcomes, and choose the best strategy. In a stressful situation, the brain must activate the entire body in order to cope with a threat. If it is able to do that, it “rewards” itself by producing dopamines, endorphins, and other positive neurotransmitters. However, if a stressful situation continues for too long, the problem remains, and possible outcomes aren’t clear, harmful chronic stress occurs.

Those brain parts are quite ancient stem structures of the CNS. Two major ones are hypothalamus (lower part of diencephalon) and amygdala (located deep in temporal lobes). The amygdala decides what is the first response to stress – “fight or flight”. It sends a signal to the frontal lobe and hypothalamus. The latter controls hypophysis and the autonomic nervous system by activating the production of adrenaline and noradrenaline.

Basic vital needs include food, water, breathing, and sleep, as well as security, self-care, and laziness (relaxation and saving body resources). Above that, there are social needs: sexual desire, parent-child relationships, sense of ownership, superior-inferior hierarchy, and need for empathy. The highest of all are self-fulfillment needs: research, creative activities, and freedom. The latter is characteristic of all living things, not only humans.

All these “programs” are “installed” into us but their activity depends on genes, upbringing, and self-learning. Our needs always compete with each other. For example, when we are in isolation, we fulfill our need for security, but there’s a lack of freedom and human communication.

The current situation causes stress in many ways. Firstly, it threatens our sense of security, which causes fear and aggression. Secondly, there’s uncertainty, so the brain doesn’t know how to react and what to expect. The brain considers ruined plans as failures that prevented the fulfilment of its needs.

In self-isolation, it’s our needs for freedom and leadership that get neglected for the most part. Problems with empathy may also occur. Empathy is a synchronization of emotional state inside a pack that exists thanks to mirror neurons – structures that allow us to feel emotions of others. Today, when there are lots of negative emotions in the world, it can become problematic for empaths. If their care for others doesn’t get transformed into altruistic activities, it can cause a state of panic. Helping others brings positive emotions, as it gives us an illusion that we have avoided the dangers ourselves.

One of the key stress transmitters is noradrenaline, which is produced in the back of hypothalamus and mostly affects the so-called “blue spot”. Main effects caused by noradrenaline can be described as mental stress. It includes increased levels of mental and physical activity, lesser need for sleep, memory improvement, and the ability to learn. If stress is short-term, then noradrenaline brings many positive emotions such as excitement and a feeling of triumph. Whether a person likes risky activities and extreme sports depend on their levels of “blue spot” activities and sensitivity to noradrenaline. However, if the stress is long-term, noradrenaline causes psychological and physical fatigue, constant anxiety, and insomnia.

Another important substance is, of course, adrenaline, which is produced by adrenal glands. It causes a tonic response and activates the cardiovascular system – that’s why excessive amounts of stress may lead to hypertension, heart attacks and strokes.

Cortisol, also known as “stress hormone”, is also produced in glands, but in their cortical substance. It increases the metabolism and makes the liver release glucose. Cortisol also harms immunity because it limits the immune system’s activity to protect the body from autoimmune diseases. Such repression of immunity can be very dangerous in case of chronic stress.

Symptoms of chronic stress and ways to reduce it

There are several symptoms of chronic stress:

Balance between positive and negative emotions plays a key role in having a good mood. Emotions are basically positive stimuli that a brain uses to fulfil its needs if possible.

Signals produced by a certain brain part are distributed as nerve impulses. They use endorphin, acetylcholine, dopamine, noradrenaline, and opioid peptides as transmitters. All of them bring positive emotions. However, if something’s wrong, neurons that produce transmitters of negative emotions (endosepins, PPI tripeptide, cholecystokinin) get activated. These neurotransmitters are not as well-researched as the previously mentioned ones.

One of the easiest ways to get some positive emotions is eating. It activates several parts of a brain: taste centers of the medulla oblongata and pons, taste centers of the hypothalamus (responsible for emotional perception of food, food preferences, and hunger) and thalamus; cortical taste centers (islet cortex, responsible for the combination of taste, sensory and olfactory signals). The problem is, overeating and a lack of physical activity quickly lead us to weight gain, so during self-isolation it’s better to eat smaller amounts of various tasty food.

Another way to feel good is being lazy. Saving resources is one of the basic human needs. When we rest, a transmitter called acetylcholine is being produced, and it gives us a feeling of relaxation. However, too much laziness can bring harm. Plus, our society does not encourage that.

Procrastination, another term related to laziness, differs from it because it means replacing a type of activity with another, not-so-productive one. By completing several small tasks instead of one major one, we get a sense of fulfilment. However, nowadays you can hear about positive effects of procrastination: when the deadline is approaching, noradrenaline helps us complete a task quickly and efficiently.

Dopamine is responsible for the feeling of satisfaction. It’s produced when we get new information, knowledge, and skills. Learning satisfies our need for novelty and activates several brain parts at the same time: stem structures and parietal lobe, which are responsible for thinking. Acquiring useful information makes us see the world as more diverse and detailed. However, the modern way of consuming information (reading tiny pieces of texts) is useless here. That’s why it’s better to study a certain topic systematically.

Another way to get dopamine is sport or any other physical activity. Dopamine is produced in substantia nigra, a special part of the midbrain that regulates motor skills, breathing, heart activity, and the state of blood vessels. Its level of activity determines if a person prefers being passive or active. Overall, two thirds of all neurons (60 bln out of 90 bln) are responsible for controlling our motor skills, so physical activity is very important for our brains.

Communication with relatives, partners, friends, and kids is another way to get a lot of positive emotions.

Mammals have two hormones responsible for communication: oxytocin and vasopressin. They make us more generous and altruistic and allow us to feel a deep connection and love towards others.

Other important types of activity are playing and creating. In the first place, playing is supposed to help with acquiring fine motor and social skills, but playing is actually beneficial for adults, too. Games like bouts-rimés, rhyming, and puzzles stimulate our brains. Creativity, on the other hand, is a way to satisfy our need for novelty and discovery. Creative activities can bring lots of positive emotions, even if you’ve never been into arts, thinking that it’s only for the gifted ones.