Can a school student make a battery all by himself? How to grow chemical seaweed and jellyfish, and explain ionic replacement reactions to primary school students? ITMO University and the Mel Science company launch a new affiliate program that will teach kids chemistry in a way that is both enticing and safe. The children will get to work with chemical agents, explore many natural processes, and learn why chemical experiments are not only  spectacular,  but immensely interesting, as well. The program is feasible for children who are eight years old and older. 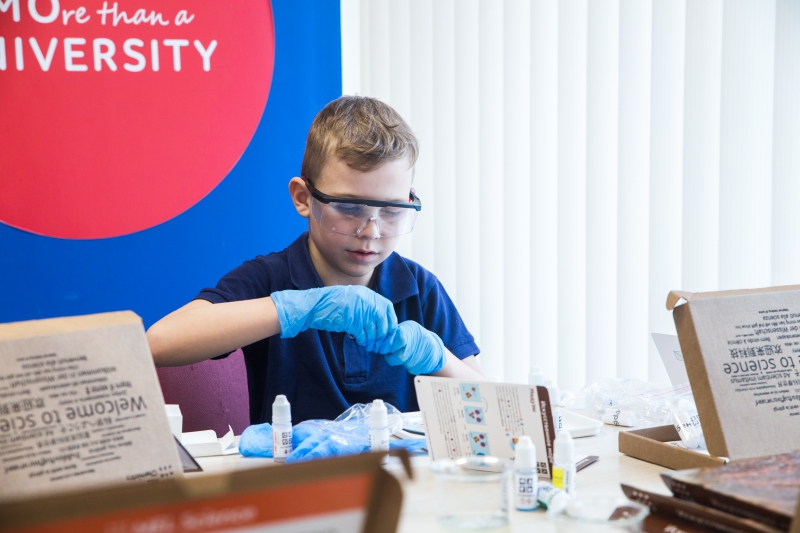 Mel Science develops chemistry kits for explaining science to kids by conducting safe chemical experiments. The company representatives stress that MEL Chemistry is the first product of this kind that actually teaches chemistry and not just shows science-related tricks. The kits come with an educational app that allows the children to explore the compounds used in the experiments as 3D models, as well as learn more about the related topics or check their new knowledge by passing tests.

The company has two offices, in St. Petersburg and London, and has been acknowledged as one of the most interesting and educational chemical projects according to The Royal Society of Chemistry (RSC).

Starting with March 2018, Mel Science collaborates with the Young Biotechnologists’ School (which is part of the Life Science School for school students that operates on the base of ITMO’s School of Biotechnology and Cryogenic Systems) on the development of an affiliated program that aims to teach children about chemical reactions and ways to explain the phenomena they encounter from a scientific point of view. The first lesson where the children could grow chemical jellyfish and seaweed from salts has taken place just recently.

The event brought together children of eight to nine years of age; according to the organizers, young age is no obstacle to starting one’s scientific career. Also,  learning becomes easier when simple, familiar objects are used to explain complex terms and phenomena. For instance, how does one create exotic jellyfish from a solution of several compounds? By simply mixing sodium silicate Na2SiO3 with different salts, copper sulfate CuSO4, for instance: copper and silicate ions will react and form an insoluble compound that is viscous and looks much like a jellyfish.

“Our company’s goal is to infatuate the kids with science from a very young age. ITMO University shares this goal, and is interested in training not just university students, but school students as well. This is why we joined efforts, and the university provided us with a testing site where we can learn how well children understand our experiments, explanations and remarks, shares Galina Konstantinova, tester for Mel Science School. At the same time, we want the kids to perceive chemical experiments as not some conjurer’s tricks, but really understand the processes that emerge during chemical reactions. Today, we studied ionic replacement reactions, therefore the questions and tasks all had to do with this topic. It is quite complex, but we do our best to provide the kids with illustrations, drawing and such, so that it would become easier for them to answer the questions.”

During the first lesson, the children have not just learned the theory, but also got practical knowledge, like how to prepare solutions and dispense substances by using special tools. At the end of it, they were asked to explain what ionic replacement reactions are in their own words.

According to the company's specialists, all of the experiments are practical in nature, so the children get to learn to explain the surrounding world from a scientific point of view as early as during grade school. For instance, one of Mel Science’s kits teaches the kids to make their own batteries. Those can be created from several chemical substances, and if everything is done right, be as good as their mass-produced counterparts.

Ludmila Nadtochiy, head of the Young Biotechnologists’ School, adds that the affiliated program came as a good opportunity for the school, as it allowed to expand its range of activities. Up until now, the school only had programs feasible for children from 7th to 11th grade; the recent lesson shows that even younger kids are ready to study and indulge in serious science.

“We place no restrictions; it is the desire and ability to learn new things that we believe to be important. Our lessons are organized in such a way that half of them are dedicated to theory, and the other half - to practice. We are well aware that the children who come to us don’t know anything about chemistry, so in our lessons, we try to focus on the issues that can interest any consumer - like food products quality, different colorants and how to extract them from natural sources, the operation of ferments, microorganisms in dairy products, and so on. At first, I was also worried that the age difference will have some impact, but that never happened. The kids work as a single team, and communicate with each other easily,” comments Ms. Nadtochiy.

Apart from regular lessons, the children also get an opportunity to work on their personal projects that they can then present at an “adult” conference. For instance, seven projects by members of the Young Biotechnologists’ School will be presented at ITMO’s Congress of Young Scientists this April.