The Zerkalniy camp recently hosted a specialized session for school students organized by ITMO University and the Academy of Talents regional center. Over the course of six days, scientists from the Infochemistry Research Center presented the latest scientific achievements to the young talents  and trained them for nationwide contests. 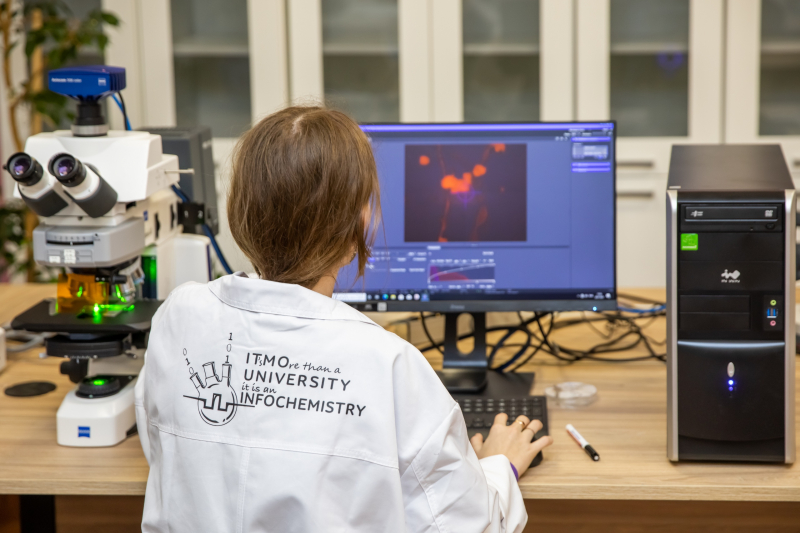 The camp on the shore of Zerkalnoye lake has been operating for over 50 years already. It is here that specialized educational sessions for St. Petersburg’s most talented children are organized on an annual basis. In late January, ITMO University and the St. Petersburg’s Academy of Talents held an educational session for students interested in chemistry, biology, and computer science.

Over the course of six days, the program’s forty participants listened to lectures, attended workshops, and conducted experiments with lab equipment. They also got training for the IChem Prize competition and the Big Challenges all-Russian contest of science and technology projects.

“At the end of the session, the school students under the guidance of mentors presented projects in advanced fields of science, including personalized medicine, new functional materials, hybrid materials, and the initiation of DNA reaction cascades,” comments  Aleksandra Timralieva, an engineer at ITMO’s Infochemistry Research Center. “We placed additional focus on projects’ practical aspects, such as the application of the studied objects in miniature diagnostic platforms, the encapsulation of drugs for targeted delivery, the design and production of sensitive and biocompatible shells for bioactive components, and the creation of new biocidal structures.”

It was the students who selected the topics they wanted to work on, so the list of projects included an AI-based system for predicting the presence of COVID-19, development of biodegradable packaging, smart skin, and so on. Specialists from ITMO University mentored the students. Classes took place at new laboratories that had been recently opened at the camp.

“The first several days were dedicated to getting familiar with the equipment and research methods, and after that, students chose the fields that interested them the most,” says Vladimir Shilovskikh, a postdoctoral researcher at ITMO’s Infochemistry Research Center. “Starting to work on high-level experiments at a new laboratory is always hard, and in this case, the time was limited as well, but in the end, everyone could try themselves at being researchers and getting interesting results. Working with these children was a pleasure: they showed a high level of motivation and were very interested in both the process and the results.”

“The greatest challenge was to finish the lessons in time; the students were ready to stay at the laboratories till midnight, even though they were scheduled to go to bed at ten,” comments Konstantin Nikolaev, an associate professor at ITMO’s Infochemistry Research Center and head of the Chemometrics track. “It wasn’t easy to persuade them to do something you don’t believe in yourself: to stop working on something interesting and go to bed. And the most pleasant thing about this session was that many students decided to visit us at the Infochemistry Research Center to continue their research, and also applied for the next educational session at Zerkalniy.”

9th-grader Olga Kaganova from Lyceum 623 participated in the educational session thanks to her chemistry teacher who told her about this opportunity. She says that she’s always been interested in chemistry, biology, and ecology. Her project is “Encapsulation of bioactive molecules in animal husbandry”.

“I was working on a neutral, biocompatible coating for bioactive molecules so that it would be possible to control their deterioration in an organism,” she says. “Simply put, a coating that would make it possible for a drug to get inside an organism before it decomposes. The study sessions were very intensive, and I liked attending them. The mentors and lecturers explained everything in an interesting and comprehensible manner, they were always ready to give advice and help with any situation. Thanks to that, I learned a lot of new things and expanded my knowledge of infochemistry.”

10th-grader Ilya Korolev from School 358 went to Zerkalniy to work on the project that he applied for the IChem Prize with. By the time he joined the session, he already had some groundwork, so he used his time at the camp to summarize his research and finalize the application.

“My project’s goal was to teach a neural network to identify cavitation bubbles of various concentrations of ethanol. In the end, it had a precision of 85%,” comments Ilya. “We used ultrasound on alcohol solvents. With the increase in pressure, the solubility of gas decreased, and cavitation bubbles emerged. They demonstrated  oscillations in various shapes. This is a hot topic now, and such systems find their application in catalysis, drug delivery, and new materials design. On the whole, I really liked the session, the mentors were very considerate, and the lectures were really interesting.”

Another school student from St. Petersburg, Anastasia Barkhatova, an 11th-grader from Lyceum 623, decided to participate because of her plans to take the Unified State Exam in chemistry and biology. Her project focused on the way buffers affect the formation of self-organizing supramolecular ensembles.

“The goal of my project was to study the effect of buffer solutions on the formation of melamine-barbiturate. We conducted a series of experiments and found that we have to consider the environment where we are growing a structure, as it will then take part in the processes inside our body . As for the session, I got to meet a lot of smart people. Everything was cool,” concludes Anastasia.

This year, ITMO University and the Academy of Talents are planning to continue their collaboration and organize a series of educational sessions for school students who are interested in science.