PhD students and researchers from ITMO’s SCAMT Institute and their collaborators from the Swedish University of Agricultural Sciences (SLU) have analyzed the surface properties of the Linothele fallax spider’s silk and how they affect the properties of the material as a whole. The study demonstrates that spider web can be used in both surgery and food packaging. 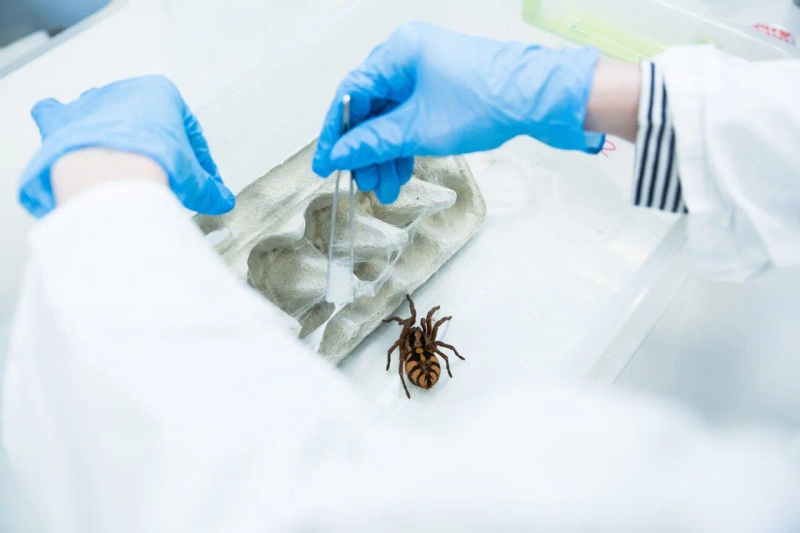 In the study, spider silk was analyzed with atomic force microscopy and scanning electron microscopy. This combination of methods allowed the researchers to study the surface properties of spider web, such as its adhesiveness and roughness. In particular, the analysis helped demonstrate that the globules seen on the surface of the web are its inseparable parts and not self-contained protein-carbohydrate ensembles.

The researchers used various solvents in an attempt to change the web’s properties. While neither ethanol nor water had a significant effect on the material, dimethyl sulfoxide (DMSO) had almost completely removed the globules off the silk, making it smoother and thus adhesive to other materials.

Afterwards, the extracts produced by each of the solvent treatments were analyzed using nuclear magnetic resonance (NMR) and liquid chromatography-mass spectrometry (LC-MS). It turned out that their compositions were almost identical – which was yet another proof that the globules on the surface are actually knots of silk thread.

Why apply the solvent treatment

Solvent treatments change the surface structure of spider silk and thus affect its biocompatibility, meaning its ability to interact with human tissues for extended periods of time without causing a negative reaction. Spider silk combines alternating regions that are hydrophobic (water-insoluble) and hydrophilic (water-soluble), as well as those that carry and don’t carry a charge. Given the wide variety of properties of biological objects, this combination of features makes spider silk applications highly versatile – both in its natural form and after treatment. For instance, protein-rich products stay fresh longer if wrapped in silk treated with more hydrophobic solvents (such as DMSO). Conversely, plant-based materials retain more moisture if packed in natural spider silk.

Moreover, the unsaturated fatty acids found in the extracts demonstrate antibacterial properties. This means they can be advantageous for both food transportation (eliminating any need for other toxic antibacterial solutions) and medicine – to be used in wound-healing dressings, implant coatings, surgical threads, and artificial organs.

“We are not claiming that spider web’s antibacterial properties are to completely replace antibiotics. In our study, the extracts were proven effective against Staphylococcus aureus. We posit that the web can be used as implant coating because it’s not rejected by the body and decreases the growth of bacterial colonies,” says Anastasiia Kriuchkova, a co-author of the article and a PhD student at ITMO.

Since the discovery of natural polymers, they have been actively used in the industry and in our daily lives. However, their production can sometimes be complex, expensive, and not necessarily profitable. That’s why chemists, physicists, and biologists have been looking for different ways to reproduce natural formulas in the lab and then in production.

Natural spider silk is a durable and flexible material that currently doesn’t have a proper synthetic counterpart – the existing ones can mimic one or two but never all properties of the original. For instance, synthetic webs are durable but not flexible. The reason is that spider glands function similarly to elegant and fine-tuned bioreactors. And so far researchers have been unable to fully describe how they function or what chemical compounds and architecture they employ in silk production.

What makes Linothele fallax stand out

Linothele fallax spiders belong to the Dipluridae family and are also known as curtain-web spiders – instead of spinning circular webs, spiders in this family create curtain-like ones. One advantage of such webs is that their physical and chemical composition is almost identical in different parts of the web. Moreover, the resulting silk is very dense because Linothele fallax produce it with one silk gland with uniform spigots. In addition to that, these spiders work very efficiently and can spin webs around their whole living compartment in a week.

The silk properties discovered at SCAMT can make significant contributions not only to fundamental research but also to applied solutions. The study’s authors are planning to look into the silk’s antibacterial properties so that they can focus more on medical applications in the future.

“Experiments with both animal- and plant-based food products have yet to demonstrate any obvious results. Moreover, spider web will hardly make a profitable food packaging – it would just be impossible to produce it on a massive scale. However, it does have prospects in this field, too,” concludes Anastasiia Kriuchkova.