On August 29, ITMO University hosted a Science Slam competition as part of the Sol-Gel Conference. The event brought together PhD students and junior research associates from Switzerland, Israel, France and Russia, who shared about their research in an unusual format. In line with the rules of Science Slam, the winner was chosen by the audience-applause meter. ITMO.NEWS wrote down the highlights of the best presentations. 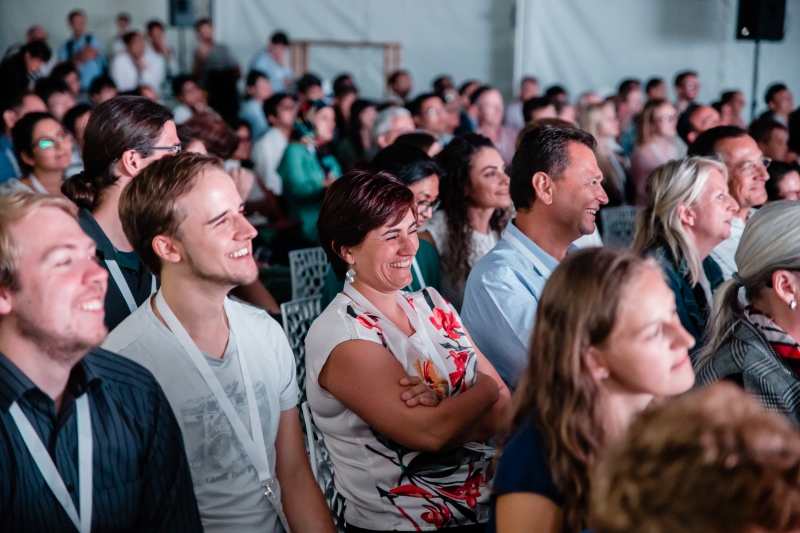 The International Sol-Gel Conference is a prestigious international research conference, which is held once in two years and unites researchers in the field of solution chemistry. This year, for the first time ever, it took place in Russia, at ITMO University. Its main topic is New Generation, so the program is designed with the aim of supporting young researchers from all over the world. That’s why it encompasses such unusual sections as workshops in science communication and panel discussion on how to build a successful career. Another new thing at the Sol-Gel Conference was a Science Slam competition, held at ITMO University on August 29.

Science Slam is a relatively new type of a recreational and educational event which allows researchers to talk about the results of their work in the format of a standup performance. It originated in Germany and was introduced to Russia just a couple of years ago. There have already been several competitions in this format organized in St. Petersburg. The decision to include a Science Slam competition in the program of the Sol-Gel Conference is a justified one, says Vladimir Vinogradov, the chairman of the Conference’s Organizing Committee and head of the International SCAMT Laboratory.

“It’s not a new thing, as the paradigms of world science are now actively changing. This is the 20th conference, it is 38 years old already, and since then it has not changed much in terms of its format. However, since this is an anniversary conference, we decided to upgrade it a bit and introduce some new things. And it worked out even better than we expected. The discussions were very lively, and I haven’t heard of any other research conferences that would be held in the Science Slam format. Our main goal here was to give active young people a chance to talk about their achievements in an unusual way,” says Vladimir Vinogradov.

A total of eight people participated in the Science Slam, each sharing about their research. For example, Romain Civioc, a PhD student at the Swiss Federal Laboratories for Materials Science and Technology, shared about silica-organic composite aerogels for high-performance thermal insulation.

“In the global context of ever-increasing entropy, energy resources are becoming increasingly exhausted. So we need to either reduce consumption or reduce waste. My solution is aerogel or an interconnected network of poles,” says Civioc.

Aerogel includes an entire class of materials in which the liquid phase is completely replaced by a gaseous one. Such substances have a very low density, tunable microstructure, high porosity and they don’t absorb water. Thanks to these properties, aerogels are already used in construction as heat-insulating and heat-storing materials for thermal insulation of steel pipelines and other equipment. The drawbacks of these materials include a complex and expensive production process, which involves obtaining the polymer gel itself and its supercritical drying. Romain Civioc is working on improving and simplifying these processes.

The topic of aerogels was continued by Romain’s colleague Natalia Guerrero. She told the audience that according to a legend, this material was created accidentally, as a result of a bet between American scientist and chemical engineer Steven Kistler and his colleagues.

Guerrero is currently working on aerogels based on biopolymers, high molecular weight compounds that occur in nature as part of living organisms. The PhD student suggests using chitin, the second most common natural biopolymer on Earth. Each year, six to eight million tons of crab, prawn and lobster waste is produced worldwide, most of it ending up in landfills. Instead, this waste could be used by scientists to create ultralight polymer structures.

Also participating in the Science Slam were Daniela Neacsa, a postdoctoral researcher at the GREMAN Laboratory at the University of Tours (France); Anne Desponds, a PhD student at ENS de Lyon (France); Murielle Schreck from ETH Zurich; Lea Dejob, a PhD student at Claude-Bernard University; Nir Ganonyan from Hebrew University of Jerusalem, and Clavdia Naumova, fifth-year student at Lomonosov Moscow State University. Each performance was a result of long preparation and each participant was supervised by ITMO University staff.

When the competition came to an end, there was a vote. The audience was asked to clap to each of the participants, and a special device called a sound level meter measured the volume of applause. According to the results, first place went to Lea Dejob. Her presentation was dedicated to improving the materials from which modern bone prostheses are made. Titanium, aluminum and vanadium are widely used for this purpose, as they provide a low density and are biocompatible, which means that the surrounding cells do not react negatively to them. Lea proposes to use a new, nitrate-free sol-gel system as a coating. It will help make dentures even stronger and will also make them look like real bones.