St. Petersburg has recently hosted the international conference “Lighting Design”, which aims to serve as an open platform for dialog between science, business, and art communities and the government. ITMO University was one of the co-organizers of the event. ITMO.NEWS attended one of the conference’s venues to find out which tasks specialists in the field of urban lighting design are currently facing. 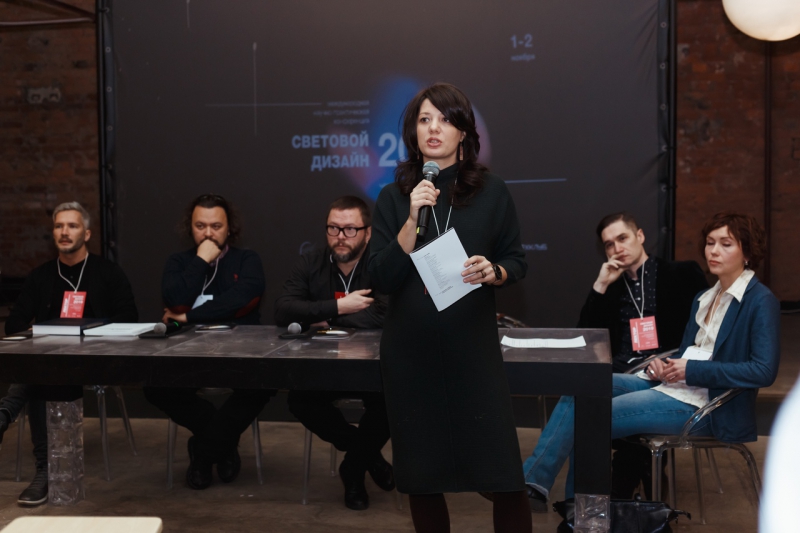 The international scientific and practical conference “Lighting Design” brought together leading experts in the fields of lighting design, architecture, urban planning and art from different countries: Russia, Finland, the Netherlands, India, and Estonia. The grand opening and a series of panel discussions took place at the General Staff Building of the State Hermitage Museum.

As was noted by ITMO University Rector Vladimir Vasiliev in his welcome address to the participants, in today’s era of digital transformation and active development of new sectors of the economy, the issue of urban lighting has become more multifaceted and now requires a common effort by the representatives of completely different areas.

“Our conference should provide an impetus for new considerations,” said the Rector at the opening of the conference, “an impetus for creating new ties for the cooperation between the representatives of the museum community, artists, designers, information technology specialists, psychologists, and sociologists. Because this problem is a bona fide interdisciplinary one.”

Lighting up the cities

The development of urban lighting systems became one of the central topics of the conference, coming at the forefront of many panel discussions and lectures. Today, urban lighting doesn’t just serve the purposes of increased comfort and convenience: it is a determining factor for the social well-being of residents. Without it, it is impossible to even conceive of a modern megapolis and the way of life natural to its inhabitants.

Meanwhile, in many regions of Russia, the problem of street lighting is still a major source of discomfort, posit the experts. Not only do some regional cities not have a modern, intelligent lighting system – they can’t even boast to have full lighting coverage of their streets.

“In 2016, Russian Public Opinion Research Center conducted a survey in which citizens were asked about what they expect from regional authorities and what they consider as the most important in terms of improving the quality of their life,” shared Sergey Borovkov, Director General of the company Light Business Consulting, during his speech at the conference. “Improving the quality of roads came first, followed by cleaning and garbage collection, and lighting of streets and outdoor spaces in third place. This aspect is perceived to have a higher significance than gardening, landscaping, traffic management and parking. In preparation for the conference, we’ve created an infographic which shows the ratio of unlit streets in Russian regions. It turned out that only nine Russian federal subjects could boast a situation that was favorable in that regard, with their unlit streets ratio amounting to less than 10%, while 25 other regions showed an unfavorable result with an unlit streets ratio that exceeds 40%.”

This is a problem with a pressing demand for solutions: according to statistics, an increase in the share of well-lit streets can lead to a decrease in the number of road crashes and street crimes. Comfortably lit sidewalks also have a positive impact on the economy, encouraging people to go out and about for longer, and cafes and shops to work for longer.

“No matter how conservative a city is, it’s still much less conservative at night,” concluded in his presentation Sergey Mityagin, Director of ITMO University’s Institute of Design and Urban Studies. “Modern cities don’t die out at dusk; economic and social processes continue into the night, which is what makes it necessary to not only provide illumination for the old purposes and processes but also enable the creation of and cater for new processes.”

Sizeable intensification of city streets illumination can be achieved through the use of new technologies, first and foremost LED light sources. These are known to have much greater efficiency and economic value. After replacing traditional mercury or sodium lamps with LEDs, street lighting becomes much brighter and more comfortable. It is not surprising, therefore, that this technology is steadily driving out traditional street lamps, and the range of manufacturers is growing rapidly.

“Over the past ten years, the industry has changed dramatically,” notes Sergey Borovkov. “While earlier, building a full-cycle plant for the production of lamps was too expensive, the LED technology made the production process cheaper, which led to significant growth in the number of Russian lighting manufacturers. Currently, there is a massive modernization of urban lighting systems that involves a widespread transition to LED light sources. In 2018 alone, the number of LED light sources increased by about half a million.”

The expert notes that unfortunately, as of now growth most often occurs due to the replacement of old mercury and sodium lamps and not because of the expansion of the street lighting networks. Thus, those streets that already had illumination become more comfortable, but those streets that didn’t have any lighting remain unlit. In addition, not all LED lamps manufacturers that have entered the market in recent years are able to ensure high quality of their products.

The conference participants have also noted that replacing the ancient infrastructure isn’t the only action necessary: what is also required is ensuring more sophisticated lighting settings. LED lamps allow for making fine adjustments to the level of illumination depending on precipitation, cloud coverage, season, and the amount of traffic on the road. In the case of decorative lighting, you can even change the color temperature depending on a specific task. However, in order to avail of all these possibilities, it’s necessary to adapt the relevant regulatory documentation, which as it currently stands sometimes dates as far back as the 1970s.

“Using gyroscope-equipped controllers allows you to instantly respond to a situation when your car crashed into a pole or the ground sank and the lamp stopped lighting up the road. The same controllers can give a signal if the lamp doesn’t light up properly. There are sensors that make it possible to monitor the ambient temperature and the temperature of the LEDs, since making snap and sharp adjustments is bad for LED elements, for example when a sharp increase in the power of unheated lamps occurs in winter. Monitoring this will allow to extend the lamp life,” emphasized in his speech Andrey Economov, Head of IoT Technical Support of the Vice President’s Service for B2B and IoT Innovations at the ER-Telecom Holding company.

The development of solutions calls for not only ensuring that they have optimal technical characteristics and comply with the relevant standards and theoretical research. It’s necessary to do everything to make sure that these meet the real-world needs of specific people living in a particular area, village, city.

“In 2018, the international consulting company McKinsey came up with a report suggesting that many acute problems in the implementation of the smart city concept boil down to the fact that many innovative solutions implemented lack a significant impact on the quality of life of citizens. We must not only provide proper city lighting but also fully understand what exactly this gives to the industry from the point of view of companies, research, and real people,” highlighted Natalya Bystryantseva, Head of ITMO University’s Creative Lighting Department and Master’s program “Lighting Design”.

Any place in the city serves as the intersection point for many groups of people who have different expectations from this or that place. Dog owners have their particular set of needs and expectations which are different from those of parents walking with their kids, those of older couples, and those of the company of teenagers. But despite this, people have three common things that they expect from the city lighting, believes Henrika Pihlajaniemi, lecturer and researcher at the University of Oulu, Finland.

“Almost every citizen puts a premium on three main aspects when it comes to city lighting. The first is security: how safe is it for them to walk down the street in the dark,” said the expert in her presentation. “Another important factor is how well you can perceive your city in its entirety, whether the sights are well-highlighted. Finally, lighting should be comfortable and create a cozy atmosphere in different parts of the city to encourage people to go out and socialize.”

Lighting can also perform a communicative function, allowing to improve the quality of urban management. What is more, lighting can actively interact with the passers-by.

“This will allow people to feel more secure when they feel that the lighting is somehow reacting to their actions, directing them or pointing the way,” added Henrika Pihlajaniemi.

The “Lighting Design” conference has been held in St. Petersburg since 2014. As early on as 2017, it managed to bring together 540 people from ten countries and nine Russian regions, including government representatives, top management of Russian and international companies, practicing architects, artists, urban planners, and engineers.

In addition to urban lighting, the conference also raised the issue of lighting in museum spaces. For one, it was discussed how museums can keep up with the times and at the same time maintain their identity in the age of active development of technologies, including those in the field of lighting design.

The second day of the conference was held in the Arhklub cultural space, which is located on the grounds of Sevkabel Port. The central event of the day was a round table with the participation of specialists in the fields of design, cultural studies, sociology, and engineering.

The program also included the presentation of the innovative international project LIGHT4HEALTH, which is implemented by ITMO University in collaboration with Thomas Jefferson University (the US), University of Wolverhampton (the UK), and three leading European schools in the field of light design: Aalborg University (Denmark), Hochschule Wismar (Germany) and KTH Royal Institute (Sweden).