Machine Rights: Can an AI Create And How Should Its Creations Be Protected?

News about a court in China ruling that an AI-written text had to be protected by copyright has been circulating online, causing a lot of heated discussions for a couple of days. Can a machine produce something not unlike the creations of human imagination? Can a robot without feelings come up with something original? And how should we protect something created by an algorithm from being copied? ITMO.NEWS got in touch with Dmitry Muromtsev, the head of the international laboratory “Intelligent Information Processing Methods and Semantic Technologies”, and Tatyana Mynka, a lawyer, to get to the roots of the problem at hand. 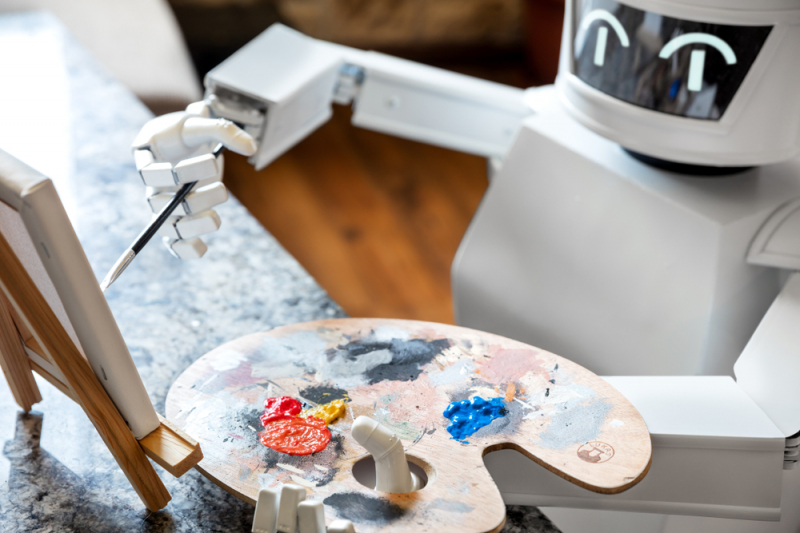 How does a robot create a piece of music, a text or a drawing?

Dmitry Muromtsev, associate professor at the Faculty of Software Engineering and Computer Systems: The topic itself [robots creating pictures, music or texts] is not new; there were a number of studies in the 1970s in which various AI creations were demonstrated to critics to great acclaim. It’s not particularly difficult from the point of view of the algorithm: a computer is presented with the rules for creating something and provided with successful man-made examples. All of this put together allows us to build a system capable of making something similar.

The problem is in the difference between what a computer actually does and how it is perceived by people. To someone who doesn’t know a lot about technologies it may seem as if some kind of magic is taking place here, that a computer is actually thinking, feeling and then creating something. That, of course, is not what happens. Humans have the need to show their emotions and thoughts, thus they use various tools to express themselves. A computer doesn’t experience this need and is a tool in itself: it presents automated functions for any creative task. It allows you to create different musical arrangements, models movie scenes, combines colors. A machine is capable of doing it better because of the sheer amount of data it can process and a greater computational performance it possesses to analyze this data. You used to only have, say, five examples to base your algorithm on, but now you have five million of them, which makes your algorithm better, more precise.


Why is AI copyright causing so much discussion?

Tatyana Mynka, a lawyer: The law is a reflection of the existing and developing social dynamics. Copyright is an integral part of our daily lives. Whether you are reading a book, watching a movie, transcribing music or taking pictures – copyright-related questions tend to come up all the time.

In international law, copyright is regulated by the Berne Convention for the Protection of Literary and Artistic Works (1886) and the Universal Copyright Convention (1952). AI did not exist at the time they were signed and if we follow their logic, a creator is a person making something by themselves.

A creator is also defined in the national law. The Civil Code of the Russian Federation, for example, states that a creator of intellectual property is a citizen whose work resulted in the creation of such property. No one else who didn’t personally make a creative contribution is recognized as a creator even if they were of technical, consultational, organizational, material or any other assistance to the creator.

To recognize an AI as a creator we have to define its legal standing. If it has no legal capacity, then it is in fact just a means of intellectual property distribution. Then we are not talking about copyright but in fact about the ownership of an AI-created product.

What do you think about this first case of an AI creation being legally protected?

Dmitry Muromtsev: We need a clear understanding of what is being protected by copyright: it can be either the creation itself or the algorithm behind it, or both. There is also a philosophical question involved of whether or not robots and computer systems can have rights.

As for this particular ruling, I think it reasonable, as a precedent needs to be established. If there is something that doesn’t seem to have an owner, it doesn’t mean that this something can simply be taken. In that sense, we need such precedents to regulate the digital world, which has had very few regulations so far.

If a robot’s creation was declared subject to copyright, who would receive financial benefits for its use and marketing?

Tatyana Mynka: If an AI is considered an object, then the benefits would go to the owner of the machine this AI is operating on or the software copyright owner, depending on the agreement established during the creation of the AI.

According to the Russian law, for instance, anything created as a result of using a property as well as any benefit made goes to its owner regardless of who uses this property, unless stated differently in a law or a contract.

But in order for this to take effect, it has to first be established that an AI-generated product is not an outcome of an intellectual activity in the sense that this term is now used in the legislation.

If a machine’s creation is good enough to be protected by copyright, does this mean that robots will soon take over in fields such as music, visual art and journalism?

Dmitry Muromtsev: If we are talking about news articles then there is room for speculation: there was never a case of a computer deciding to cover a financial topic or the results of the latest match by itself. There is a person, an editor, who sets up the algorithm to do it. This bit is usually skipped, but people don’t disappear from the process of creating a piece of news, it’s just that their role is changing.

When a computer is writing an article, which is quite common nowadays, it is not doing the same work a journalist would. It simply takes the facts, like the outcome of a match, and fills out a form with the information about the coaches and players, creating a normal text that can be read by a person. However, the field where such technologies can be used is very limited. It can be a piece on the latest World Cup finals or the stock exchange fluctuations. But a computer is not capable of producing analytics and conclusions using guesses and estimates as well as non-formalized experience.

What are the consequences of the recent court ruling in China?

Tatyana Mynka: Essentially, this is a clear legal precedent, a decision of a specific court on a specific case. And a precedent is a source of law (meaning it can declare, change or abolish legal regulations) that sets an example for future actions to be taken in similar situations.