On February 1-23, the A.S. Popov Central Museum of Communications hosted Measure of Chaos. Science as a Means of Communication, a wide-ranging Art&Science project that included workshops and lectures on this interdisciplinary field. LIFE FORMS, one of the key tracks of the project, focused on generative biology, bioethics and other disciplines within BioArt, which is among the most popular fields of Art&Science. ITMO University took part in this track by organizing a BioArt weekend. Laura Rodríguez, a specialist in the field of microbiology and a second-year Master’s student at ITMO’s Art&Science Master’s program, hosted two workshops on BioArt. 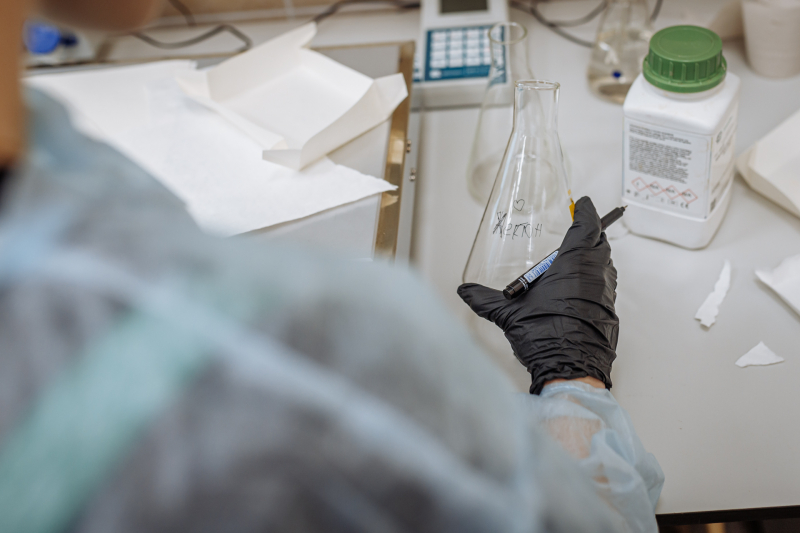 One of the workshops, co-hosted by Laura and Artur Konstantinov, focused on Physarum polycephalum, a myxomycete, or slime mould, that is somewhat intelligent and can sense distance and direction. The participants had a chance to experiment with the myxomycete’s ability to make its path following a certain logic and direction.

The second workshop focused on bacterial cultures and the way bacterial communities interact with the human mind and body, while also covering how we can safely interact with them to create modern art pieces. The participants were then offered to use their newly learned skills by growing their own bacterial colonies in Petri dishes.

These workshops were the first BioArt events organized by ITMO’s Art&Science Center for the general public. Hosted by the SCAMT Laboratory, the event also marked the first time that the lab welcomed not only students and staff but anyone willing to learn more about Art&Science. According to Aliya Sakhariyeva, the head of the Art & Science Center, the workshops were a success with the public:

“We had so many applications that we were even forced to turn some of them down because the lab could only host 12 people. We organized the workshops to introduce the public to Art&Science and BioArt specifically by inviting them into our labs to work with a bioartist. We saw a great interest from the audience, some even asked us about our future plans and upcoming workshops. Evidently, we have to collaborate not only with our students, but with anyone else interested in the field,” says Aliya.

The workshops were also meant to showcase ITMO’s Art&Science Master’s program, the first of its kind in Russia, launched at ITMO in 2018. The curriculum, created for artists working at the intersection of art and science, aims to combine cutting-edge biology, photonics, optics, IT and robotics with art practice. The program has several tracks: BioArt, NeuroArt, RoboticArt, Video/AR/VR Art, AIArt and Media Art. Next year, courses on SoundArt and audio-visual techniques will be added to the curriculum.

We got to talk to the workshop’s participants and organizers about BioArt, their research interests and creative plans.

I actually specialise in molecular biology. My project at ITMO deals with genetic modifications. But microbiology is better suited for a beginner workshop. Maybe later, when our participants are more experienced and have acquired some knowledge, we will advance to molecular biology.

As I was graduating from my Master’s program at the Skolkovo Institute of Science and Technology, I started considering what my next step would be. I was looking for Art&Science programs all over the world and stumbled upon a publication about ITMO launching just such a program. My fellow artists recommended me to look into it – and here I am.

I am very happy with my choice and especially with the fact that it’s a new program, which means that we all have a chance to grow and evolve with it. These days, I collaborate with the Art&Science Center on workshops as well as an assistant. For instance, I am working on a research project about the way museums use big data to create Art&Science pieces. We are analyzing big data technologies which might come in handy in the future, when ITMO launches its own Art&Science museum at Highpark. Who knows, we might be able to create some of its first artwork.

It’s hard to define whether I am an artist or a scientist. I think it depends on what I am doing at this particular moment. When I am creating something, I am an artist. But I have to operate with objective facts when I am teaching a class, for example. I don’t really like to label myself, I am only glad to be doing what I love. I felt I was missing something when I was trying to stay in academia. Now, however, as I am involved in various creative projects, I feel I have found my place.

Last year, I took part in several exhibitions. I had a solo one at the Oratorium project, established by Artur Konstantinov – and we have been collaborating ever since. My second exhibition was a collaboration with BIOCAD and was presented at Reunion, a festival hosted by St. Petersburg State University.

I am partnering with ITMO’s Art&Science Center as an independent curator. These days, I am looking for opportunities to work with BioArt in St.Petersburg – which turns out to be rather challenging. BioArt is actually not a brand new field, it has been developing elsewhere in the world since the 1980s, but sadly it hasn’t advanced in Russia because of how hard it is to get access to labs here. They have always been off-limits to people who didn’t work in science. But it is extremely important for bioartists to collaborate with actual scientists under laboratory conditions – it’s impossible to create BioArt otherwise. To be honest, there is such a thing as “garage” BioArt, but it is also yet to become popular in Russia.

ITMO has a Master’s program that allows artists to work with biotechnologies in labs and collaborate with scientists. I am curious to see how it will unfold. I would like to curate their work and I am now getting to know the artists studying at ITMO. For instance, we have organized our first workshop which we will continue improving to cover more topics.

I am not currently studying at ITMO, but I’ve been thinking of entering for several years now. I am working with another artist on I felt it, a project on technology and nature. This workshop gave us an opportunity to rethink our project and make it more scientific.

We took part in two workshops. The first one was on bacterial colonies – we came to see the outcome today, but only two participants had significant results. That was why we conducted the same experiment a little differently today. It was somewhat of a performance: we stood in a circle and shook each other’s hands one by one, each of us taking a sample of the hand that we shook. So, the last in our circle had the greatest number of bacteria from every participant.

During the second workshop, we had a chance to work with a myxomycete. Each of us came up with a concept, printed a picture and marked the key points on it. My picture was of the golden ratio and I put oatmeal on a number of key points. It was interesting to see how the myxomycete would move and whether it would follow the lines in the picture.

It was a peculiar feeling: it was bacteria and myxomycetes that we got our hands on, but we were making them human. I was constantly thinking, “How will it behave? Is it comfortable? Did I put enough oatmeal?”

All in all, it was wonderful. I’ve seen the workshop announced on Instagram, as I’ve been following this program for a while now. I would love to take part in more events and get to know the inner workings of ITMO’s labs.

Vsevolod Krassa, a PhD student at the Institute of Human Philosophy of Herzen State Pedagogical University and staff member of the Art Media Center

My research interests involve analyzing bioinformatics, biocomputing and biophilosophy through the lens of social sciences. I am curious about BioArt because it revolves around many of the same topics. Art in general is a way to posit an ontological question – it is a kind of philosophy done with fabrics and tools, while classic philosophy primarily works with language.

Language is an entirely human field and I am more interested in a non-human perspective. When we use a medium to philosophize through it, we start a new kind of dialogue which doesn’t necessarily have anything to do with human communication. This practice takes us further. Moreover, BioArt raises unique ethical questions: biologists and social scientists have fundamentally different views on ethics. A lot of BioArt projects are trying to establish some form of interaction between these two fields, at times creating something even more meaningful.

I approach these topics as a theoretician. I would love to do BioArt, but, unfortunately, I have no access to labs. I would also like to work in a team, as I consider teamwork and collaborations to be the future of science. That is why I joined this workshop – to talk to new people and learn something extraordinary. And, naturally, to meet the Physarum polycephalum face-to-face. I am fascinated with this organism and have read a lot about it, so I really wanted to work with it.