Hailing from sunny Mexico, Laura Rodriguez is a Master’s student at ITMO University’s Art & Science program where she explores bioart and sustainable materials. A bioartist working with bacterial cellulose, she has previously studied at Skoltech, where along with fellow students she worked on crafting environmentally-friendly leather from yeast and bacteria. What can we learn from kombucha? And how does mystical realism factor into bioart? 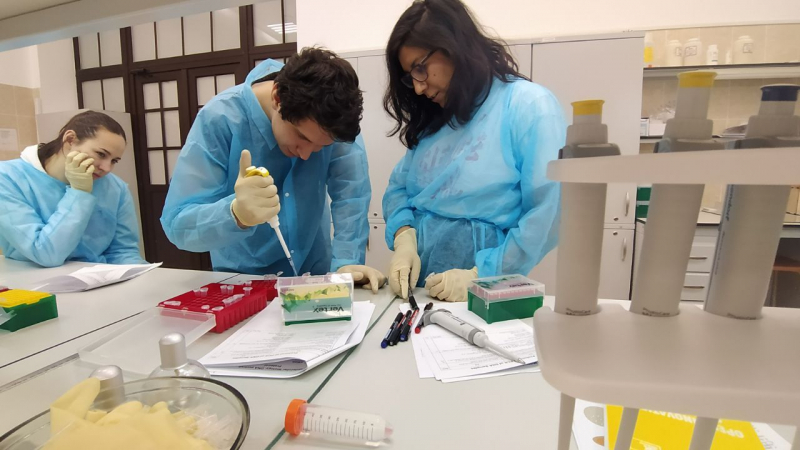 As an artist, what drew you to working with Kombucha?

I am interested in different means of creation and expression. Kombucha is what we call bacterial cellulose, created by a symbiotic community of bacteria and yeasts. It sounds interesting to work with this material for design and art, and I was curious to discover its legacy within Russian traditions. Apparently it was very popular in the 19th century. Each kombucha is different since it is formed by different strains of bacteria. Working with kombucha allows us to address the issues of biodesign, community, and bioart. That is why it is so interesting to me.

Do you have any future plans where this plays a major role?

Yes, I currently have some biodesign workshops and maybe in the future some surprises with other materials. The SCAMT Laboratory at ITMO has also expressed interest in using this material for artistic projects.

I think that the design and use of new materials can seek answers using the same principles, for example; understanding symbiotic relationships at a microlevel could give us ways to work and understand it at the macro level. Designers and artists such as Susan Lee have already made several proposals for clothing made with kombucha, but there are other biomaterials such as silk of transgenic origin or spider web that are gaining commercial recognition. We must keep in mind that biodegradable does not mean sustainable, so it should be a crucial concept in new proposals. Meanwhile, I educate people on what kombucha really is and how to use biomaterials in art.

What do you believe we can expect from bioart in the near future?

I think that all art has the purpose of expressing something, which depends on the observer and the artist. Bioart continues to express future worlds, capturing the present or holding ancient philosophical issues like the pursuit of beauty. But in general, bioart has so many variations that it is difficult to maintain rigid expectations. It is better to be surprised.

Who are your favorite science artists?

I think that in general I feel attracted to the works that bring together mystical and scientific elements, for example, the works of Joe Davis and the golden silk Bombyx Chrysopoeia or the movement of bio bewitchment from the Canadian artist Whitefeather Hunter, the founder of Bioart Coven.

I was impressed by the mesmerizing work of Marta de Menezes. Last year, she presented Anti-Marta, an installation exploring the limits of human individuality in the face of an increasingly biotech-based society. It represents the relationship between an artist and a scientist, a pure expression of the movement of science art and love. Marta and Luis, an artist and an immunologist, have a pact for life: mated, married, united. Their search for an artistic representation of such a pact led to the transplantation of skin grafts. In both cases, the outcome was a tension between their individualities and their bonding. My soul gets agitated and inspired when an artist uses their own body and relationships as a canvas; it moved my mind and heart, and the pursuit of self-identification is one of my topics of interest.

It is difficult just to choose some favorite artists, as there are a lot, and they vary according to the period or movement we are talking about; however, I really enjoy surrealists like Leonora Carrington and Remedios Varo who capture the magical realism of Mexico, referred to by the French writer André Breton as "the surreal place by excellence."

If we talk about Russian artists, there’s a huge list, and though I constantly pass by the State Russian Museum to gaze at Pavel Filonov’s artworks, my heart is with the writers. Recently I’ve been reading the poems of Daniil Kharms and Anna Akhmatova.