Laura Elidedt Rodriguez Torres and Ethan Avila Hernandez left sunny Mexico to come to Russia and study on ITMO University’s innovative Art & Science Master’s program. In this interview with ITMO.NEWS, they discuss their Art & Science experience, the quirks of living in St. Pete, and advice for international students wanting to make the jump of studying in Russia. 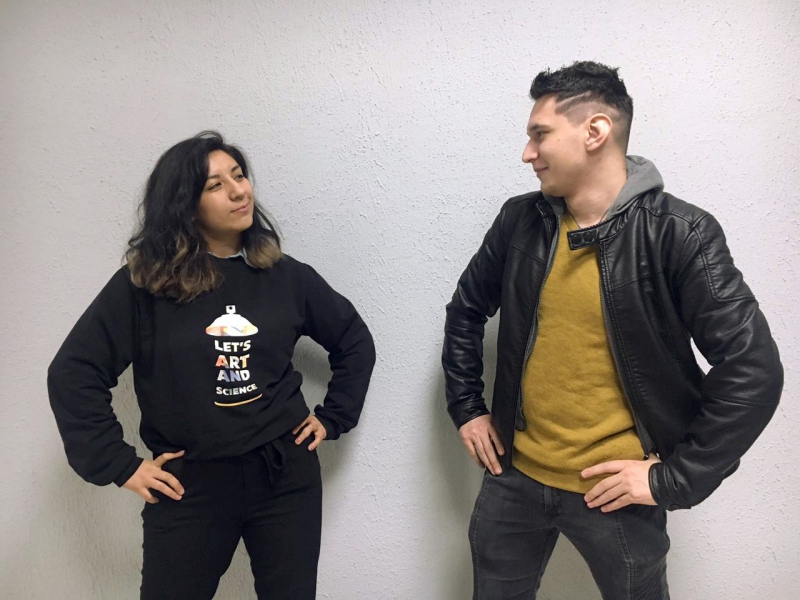 The two students had a somewhat different journey to ITMO University. Two years ago, Laura Elidedt Rodriguez Torres was looking for opportunities to pursue her Master’s, prior to having studied to become a biotechnologist in Mexico. This search led her all the way to Moscow’s Skolkovo Institute of Science and Technology (Skoltech). While there, she discovered bio art and Art & Science, and self-professedly fell in love with this exciting field at the intersection of exact sciences and humanities.

“Technologies and art form and define our society, and are always in close interaction with it. There’s this widespread belief that science happens in closed-off labs somewhere far away, but in reality, science is something we live in and live through day to day. Art can be the means to connect society and new knowledge, new technologies. In choosing to study Art & Science, I was motivated by the desire to popularize science and create something of my own, something that would help make this much-needed connection.”

Laura learned about ITMO University’s Art & Science Master's program even before its official launch, while attending a Skoltech meeting with different representatives of the bio art community. She started following ITMO on social media and applied for the program as soon as the opportunity arose.

“When I learned about the open call for the program’s applicants, I was in Mexico, vacationing with my boyfriend. So instead of spending time on the beach, I had to hit the books and prepare for my entrance exam. But I still have very fond memories of that time, and can confidently say that this whole experience was worth it.”

As for Ethan Avila Hernandez, he discovered the program by chance, after remembering his long-term dream of traveling to Russia. He always wanted to visit the country, but it didn’t work out with the exchange program he applied for, and he forgot about this idea for a while. But it came back to him after he graduated from university, prompting him to do some research into further study opportunities in Russia. When he decided to look through the offerings in the field of art, he found ITMO’s Art & Science program. Given that it was the last day that the applications were accepted, he hurried to submit his.

“This was a momentous decision that changed my life in a major way in as little as 15 days. I had just graduated from university and didn’t have a clue as to what to do after that, and then suddenly there I was, leaving for Russia in a month to spend two years there. A change of plans, to say the least.”

What attracted Ethan to the program was its unique combination of topics from the two fields that have long been considered antonyms.

“This program introduces you to the foundations of art and science. To those who had only dealt with exact sciences before, it gives the opportunity to become closer to art, to express themselves, to break conventional scientific boundaries. To artists, it gives the opportunity to acquire scientific knowledge, to explore various scientific approaches, to understand how science works. Generally, it allows scientists and artists to develop a better understanding of each other’s trades, which in its turn leads to more wholesome collaborations at the intersection between the fields.”

With ITMO University’s program being one of the few such programs worldwide, both students considered it important to pursue their studies in Russia because of the rich history of Russian science and art.

“In Russia, you can go on a tour of Pavlov’s lab and get that incomparable feeling that history was made there. St. Petersburg especially is known to be the cradle of many artistic greats. Moreover, it is in Russia’s artistic and scientific tradition to be open to new things, which is very important for what we do in our field,” share the students.

The transition to a new academic environment went smoothly for both Laura and Ethan, though they did experience some cultural shocks. For one, Ethan marvels at the Russian practice of having “windows” in the timetable between classes, whilst Laura was surprised that the classes here divide into lectures and seminars.

“First you listen to somebody speak for two-three hours, and then you go to a separate class where you engage in a dialogue with your teacher and peers. In Mexico, we tend to have a more off-the-cuff interaction with lecturers. But I’m really enjoying it nevertheless.”

What Laura also really enjoys is living in St. Petersburg, which she describes as being calmer and (metaphorically) warmer than the ever hustling-and-bustling Russian capital she also had the experience of living in.

“I took to running in the Summer Garden, and at the end of each run I usually end up by the stunning Church on Spilled Blood and get that vivid realization that I really am in St. Petersburg, and this feeling provides me with a constant source of inspiration.”

Ethan holds similar adoration for St. Petersburg, especially because of all the history the city stands for.

“This city is history in itself, you bump into it everywhere you go. You’re walking around, and suddenly you see a building with a sign casually mentioning that Dostoevsky lived there. You go two streets further, and see something else of the kind. Not to mention the breathtaking beauty of the place.”

As for their plans after graduation, Laura wants to travel, and also to visit Mexico to encourage other young people interested in art that, despite the widespread myth, there is life and work for artists. But looking farther ahead in the future, she considers the option of staying in Russia, even though as a Mexican born and bred, she admits that her home country will always be important to her.

Asked the same question, Ethan jokes that it’s hard to tell as he can’t even say what he’ll be doing next week. But striking a more serious note, he admits that opportunities permitting, he’d also like to stay in Russia.

“We’ll see how it goes. If I have the chance to find work or do a PhD here, I will stay in Russia. Especially if there were a PhD program in Art & Science: I’d love to continue my studies in this field.”

They unanimously advise other international students wanting but not daring to come to Russia to go for it, if only to explore a culture so different from their own.

“Don’t hesitate and come! If your dream doesn’t scare you, then it’s not a big dream after all. And don’t let the stereotypes about Russia discourage you. Well, maybe apart from the one about Russian weather, so my advice would be to bring warm clothes, and lots of it. But in general, you’ll find out that we are more alike than we are different, and it’s a great conclusion to reach,” says Laura.