Hermitage, Football, and Lots of Programming: Summer Camp at ITMO

For several years now, students from all over the world have been coming to St. Petersburg to take part in ITMO University's Camp in Programming. We met three current students: Hassan from The Gambia, Roh from Slovenia, and Enrique from Mexico, to talk about their experience. 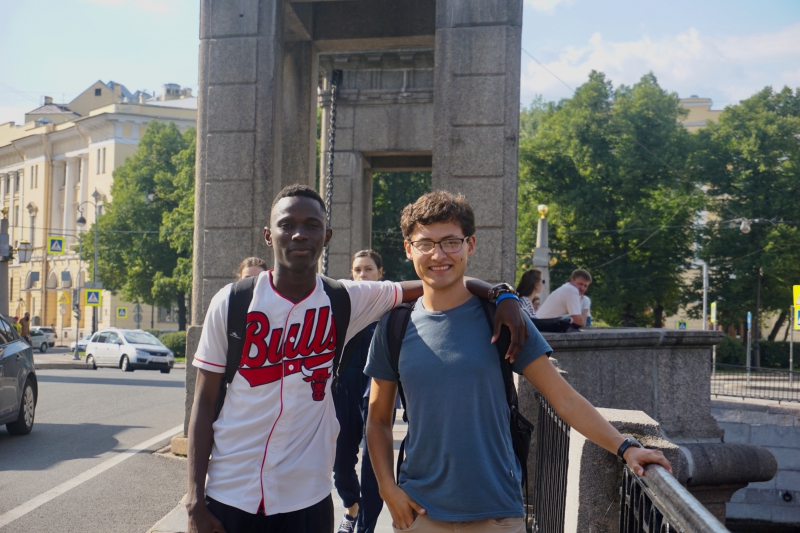 ITMO University’s Camp in Programming is an English-taught summer school with an intensive program that offers a perfect blend of computer science theory and practice. Participants not only get hands-on programming training, but also acquire valuable soft skills: teamwork, time management, organizational, and problem-solving skills.

All of our interviewees came across the program in different ways. For Hassan B. Drammeh from The Gambia, it was a Facebook ad that got him interested. He was very impressed by the sheer amount of positive reviews the summer school got from its previous students.

“The reviews were all very good; people were very happy with their studies, so I went to ITMO’s website to learn more about the university. After discovering that ITMO is the only seven-time world champion in programming, I realized that it would be the perfect study destination for me. Besides, I’d always been very interested in Russian culture and history, so I was very excited about visiting Russia,” shares Hassan.

Roh Vodopivec, a second-year Bachelor's student of maths and computer science from Slovenia, says that he first wanted to come to St. Petersburg for a summer vacation, but then decided that it would be great to also study while traveling.

“I looked at the options, and ITMO University was the best one in the city, so I decided to give it a go,” says Roh.

Mexican student Enrique Soto Fernandez turned out to be a habitual Russian summer school attendee; he really enjoyed his first time studying in Russia and decided to enroll for the second time. He made his choice thanks to an agency promoting Russian higher education in Latin America, which recommended ITMO University as a place where he could boost the programming skills he acquired during his Bachelor studies in aeronautical engineering.

“This is my second time in Russia and the second time being at a summer camp. The first time went really well, so I contacted this agency and ITMO’s Camp in Programming was their first suggestion. I thought that this would be very useful for me because it would let me connect the skills and knowledge I’ll acquire to my thesis,” explains Enrique.

Part of the experience has been observing interesting differences between the teaching approach in Russia and in their home countries. All the students noted that in Russia education is very practice-oriented, and students are often expected to find solutions by themselves.

“They usually give us an hour of lectures, and then the next four or five hours are spent on practical work. Students here are expected to think independently,” notes Roh.

The students admit that the classes are quite challenging but in a good way. Hassan says that as he wasn’t very familiar with programming prior to coming to St. Petersburg, at first he found the studies rather difficult, but that was what helped him progress.

“The lessons are challenging, but the teachers are always there for us if we have any problems or questions we want to discuss,” adds Hassan.

Although they spend most of their time toiling away in the classroom, the students also get to go out to explore the city.

“I’ve been visiting a lot of museums: the Hermitage, for example, and the Peter and Paul Fortress; it was really interesting to learn about the tzars,” shares Enrique.

Hassan, too, has done some sightseeing, but what impressed him the most was the exhilarating and jovial atmosphere of the World Cup.

“I went to the Fan Fest a few times, including when Russia was playing. I really enjoyed it; it was very well organized. Russians were very happy about the World Cup, and as an avid football fan I can really relate to that,” says Hassan.

The Slovenian student preferred to explore the city as a local.

“We had a sightseeing tour that was organized as part of the summer school program, but I’ve also spent almost 15 hours in the Summer Garden and visited the park near Begovaya metro station. I had a swim and sunbathed a bit. I liked it a lot; it’s a very nice neighborhood,” reflects Roh.

Apart from benefiting them academically, the camp has helped the students gain some multicultural experience that allowed them to see their own countries from a new perspective.

“What surprised me the most were the high buildings. Everything is so huge. And the fact that most people live in apartments. In Mexico, everyone lives in separate houses, even students,” says Enrique.

Hassan acknowledges that Russia is very different from his own country.

“It’s like a whole new world for me. It’s very interesting how people here have a completely different approach to some things in life compared to what I’m used to. I like it very much. I also really like the metro stations here. The transport system is amazing: it’s very fast and reliable.”

The students also marveled at the wave of extreme heat that has hit St. Petersburg this summer.

“I really feel a little bit of Gambia in Russia,” laughs Hassan.

Looking back at their Camp in Programming studies, all students note that the knowledge and skills they've acquired will definitely come in handy going forward.

“This program made me consider Russia for my Master’s degree, especially given that Mexico doesn’t offer the type of program I want,” shares Enrique.

For some of them, the experience was life-changing.

“The summer camp helped me develop a whole new set of skills. It was also very useful to see how programming is approached here in Russia. It really motivated me to continue my studies; now I want to keep on exploring. This is like a new beginning for me, and I appreciate it very much,” says Hassan.

Roh says that the trip has inspired him to continue with his Russian language studies.

"I'll definitely come back to Russia as a tourist,” says the Slovenian student.