For the third year in a row, ITMO University's Russian Language Summer School has given students from around the world an opportunity to delve into intense Russian language study for a few weeks, get to know the beautiful city of St. Petersburg, and learn more about Russian culture. 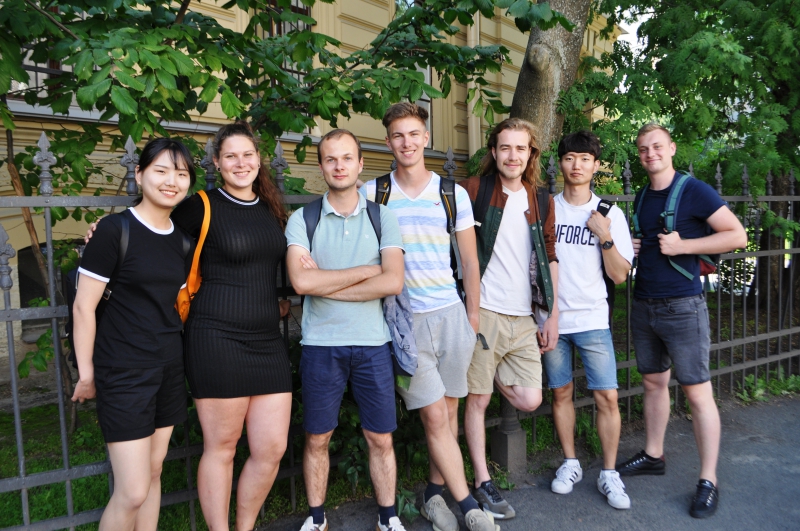 This year, seven students have come to participate from as far as South Korea, Germany, Slovakia, Norway and the Netherlands. While they’ve been enjoying getting to know Russia, they’ve also gotten to know a little about each other's cultures, for example when heading out together to a Korean restaurant.

“Before I came here, I only knew the Russian alphabet and the word spasibo. I’d never been to Russia before, and I’ve wanted to come for a long time, mostly because I’m interested in Russian history and the language. Being here for a few weeks rather than just travelling around is really rewarding, as it lets you really feel the place,” shares Hanne Marhaug from Norway.

Most of the students found out about the summer school program online; Arne Brise from Germany was lucky enough to get a scholarship from the German government, which covered his tuition fees and accommodation:

“My university, the University of Applied Sciences, is one of ITMO’s partner universities in Germany. I’m studying to become an engineer and our universities have a lot of similar fields. My tutor works closely with ITMO and since he knew I already had some basic Russian he encouraged me to come and participate in the summer school,” says Arne.

This year, we were pleased to welcome two students from South Korea. They were both encouraged to come here by older students from their universities who had come and studied in Russia before.

“I found this program on my university’s website. I want to learn a lot of languages, so I decided to come here to learn Russian,” says Eunbi Lee from South Korea.

“I really wanted to go to Europe, and I chose this city so I could experience more of Europe,” explains Noh Sichang from South Korea.

Two students from the Netherlands who have already studied Russian for some time are also participating in the summer school.

“I just searched online for Russian language summer schools in St. Petersburg and found two such schools at different universities, so I’m participating in both!” explains Tim Darwinkel from the Netherlands.

“Since my first language is Slovakian, I can understand a lot, but it’s difficult for me to have a conversation in Russian. About 50% of the language is quite familiar, but the other 50% is a real mix, especially in terms of grammar,” says Marek Jenco from Slovakia.

“This is already my second time in Russia; I’ve been learning Russian for five years, so I have come to improve it even further. I wanted to come to St. Petersburg because I thought it is a bit smaller than Moscow and easier to navigate. ITMO had the perfect program for me because it’s in a central location and the dates are good!” says Matthieu van Bekkum from the Netherlands.

The group has been divided into two levels for their classes: beginner and intermediate. Students in the intermediate group have varying levels of proficiency, but despite this challenge the teachers have adapted well and the students are very pleased: “Our teacher really knows how to handle the classes so that everyone can get by, and there’s only four of us so we each have real individual attention,” says Tim. The classes are predominantly in Russian, even for the beginner group, but from time to time when there is a challenging grammar concept, the teacher explains it in English.

Every day they study for about 3.5 hours, and they have about an hour or more of homework to complete each day. But despite their intense Russian study, they have time to explore the city and get to know some of the local people and places.

“We have had two tours arranged by the school so far: one to the Russian Museum and a sightseeing tour of St. Petersburg. We have a lot of free time, so I’m able to make some plans for myself: for instance, on Saturday I explored the town of Kronstadt,” says Matthieu van Bekkum.

“We spend a lot of time together: we went to a Korean restaurant together, we went to the beach together, our Russian “buddies” went to the club with us, and also took us to a party,” shares Arne Brise.