Students from around the world have come to participate in the IT and Innovation Business in Russia exchange semester at ITMO. Among them is a bright and bubbly group from Brazil. Every year a group of four or five students come from the Federal University of Espírito Santo (UFES) in Vittoria, on the east coast of Brazil, to join our exchange semester. Last year we talked to Esthevão who shared about what brought him to Russia. This year we talk with Angelo, Thales, Caio, Mateus and Yan who have been here for five weeks now, about their experience so far. 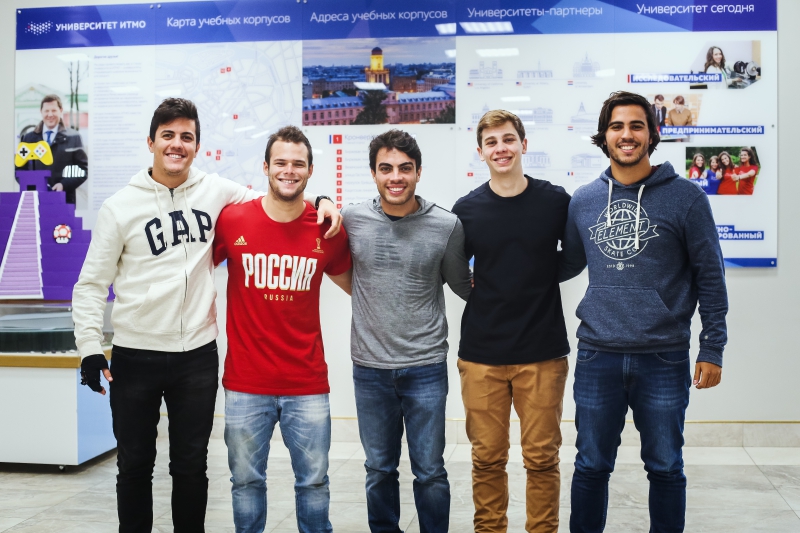 Angelo Trazzi, Mateus De Souza and Yan Gouvea are studying electrical engineering at the Federal University of Espírito Santo, and Thales Simoes and Caio Doelinger are studying mechanical engineering at the same university. The time they’ve spent at ITMO is the longest they have been away from home - except for Thales, who relocated to Vittoria from his hometown to become a student at UFES.

Their university is classical in the sense that it teaches all subjects - like maths, law, medicine, psychology, etc. There are a number of campuses not only in Vittoria, but in other cities, and, as they describe, each campus has hundreds of buildings - including cafes and libraries; there are a lot of trees, a large lake and even monkeys.

So what brought these eager Brazilians to Russia, and even better, to ITMO?

“The Brazilian government used to have a popular program called Science without Borders which funded students studying abroad. My brother participated in the program and went to Liverpool for a year. As soon as I started university I searched for a similar opportunity. Unfortunately, the program shut down. I always wanted to go on exchange, so when I found this opportunity to come to ITMO I didn't think twice!” - shares Caio.

Thales had a similar desire to go on exchange, but found it hard to find something as a mechanical engineering student. When he read about ITMO, it caught his attention. Yan is interested in getting a more interdisciplinary education. Back home he mostly studies engineering, so it was the economics aspect of our exchange semester that interested him. For Angelo, it was the desire to grow as a person and get to know other cultures.

Mateus, who studies electrical engineering, has a friend who’d been to ITMO and so when he returned, Mateus quickly contacted the university to inquire about the mobility program. “It was a dream for me to come to Russia, because I am really interested in Mathematics and Informatics and I have heard of a genius who lives here, Grigori Perelman. He solved one of the seven most difficult maths problems in the world. He's still in St. Petersburg! Knowing that science in Russia is really strong, and that ITMO is excellent in photonics and robotics, which are the future of telecommunications, I was encouraged to come here. In fact, ITMO has won a lot of prizes in programming, so if you like telecommunications and informatics, this is the perfect place to be.”

Once they arrived at ITMO, all exchange students were paired up with local students through the new program known by them as the “buddy system”. The local students, who must have a strong English language level and a desire to help others, have an opportunity to interact with students from around the world and make their experience in St Petersburg more comfortable.

Aleksandra (Sasha) Shubina, who is Mateus’s buddy, trails alongside these 5 Brazilians explaining all the interesting peculiarities of life in St. Petersburg. “When I found out about the buddy system, I thought it was a good opportunity to help foreign students with their studies. Almost everyone speaks Russian here, so it’s a great opportunity to practice my English, talk with foreign students and get to know new cultures.”

“In Brazil we usually greet each other by hugging and giving two kisses,” explains Mateus, “Russians are not used to hugging, so when we hugged Sasha she went so red; and later, I learned that this is unusual for them. They simply shake hands or just say hello.”

Sasha and the other buddies met the new students at the airport and accompanied them to their dorms. They helped them settle in and communicate with the infamous dorm “babushkas”. Then they showed them the grocery store, helped them buy sim cards - everything one needs in your first few days. In Brazil there isn’t a university dorm culture like in Russia. In their city there's a neighbourhood where students from other cities rent flats.

“From the first day we noticed their behavior is different to Russians.” shares Sasha. “They are more open, sometimes we tell them they’re like kids. They are a lot of fun. We laugh all the time. They're always happy. Always in a good mood. Even when they’re tired, they are still cheerful.”

“Our buddies have taken us out to Dumskaya street, near Nevsky prospekt, it’s a street full of bars and clubs!” says Caio.

Besides their buddies, there are also local students in their classes who are participating in the “exchange semester at home” program, enjoying classes in English and interacting with international students.

“People are really helpful here,” says Mateus, “The first time you meet a Russian, he seems very strict and doesn’t smile a lot. Once you say “zdrastvuyte” (hello), he’s really helpful and really kind - well, not everyone, but most people are like that. When I go to cafes, a lot of the waitresses try to teach me Russian. When I order something, I usually ask them to teach me how to say it in Russian, and they try to help me, and they’re really happy to teach me.”

“Not everyone speaks English here” adds Angelo, “but even if they don’t, they still try to help you with gestures and using Google Translate.”

“The Google Translate voice feature is so helpful for communicating here,” says Caio.

“It's very different here from Brazil.” shared Yan, “First I got sick, I had the flu. And I thought it would be so difficult to live here for a few months. However, I am enjoying it now. I play jiu jitsu, I fight with Caio and Mateus and I almost broke my finger. I'm enjoying living here.”

“Another reason I was interested in coming to Russia was because of sport,” shares Mateus, “it’s one of my hobbies and it's really strong here. Before I came, I researched sports in Russia and I found a lot of interesting ones that aren't popular in Brazil - like weight lifting, arm wrestling, even gymnastics. I found a lot of gyms and fitness clubs. Now, we go to a gym and play jiu jitsu with a Brazilian teacher who has helped us out a lot since we've been here.”

As far as their cultural experience has gone, they've jumped right into the deep end with a celebration of Maslenitsa on their second week. ITMO organized a special visit to Yagodnoe camp to celebrate Maslenitsa and a group of international students went along!

“It was cold at the camp, but we ate excellent food like blini and syrnikis. We had a special workshop where we learned to make dolls and then we burned them, which is something they usually do on Maslenitsa and we were told it represents the end of winter and the start of spring“ says Mateus, “It's strange because to Russians, the seasons are really important; we don't have winter or spring where we live - every day is summer. They are happy because winter is over and this is really interesting for us.”

“One thing I thought was kind of unusual,” explains Caio, “was that before burning the dolls, everyone held hands together, walking from side to side, like a ritual, someone muttered something and we needed to repeat it.” They later learned through their buddies that this is supposed to help get rid of fears.

“The “stolovaya”, that is, the university cafeteria, is very different to Brazil; in Brazil we can pick the food ourselves and we pay for the weight, but here they pick the food for us and for everything you add to the plate there’s a separate cost,” shares Mateus.

“After lunch one day,” explains Angelo, “the five of us went to the bathroom to brush our teeth, and a Russian girl entered the bathroom and she was staring at us and said “what are you doing?” and she said it’s not normal for Russians to brush teeth after meals. In Brazil, you brush your teeth in the morning, after lunch and in the evening. You often have your toothbrush with you, but not always.”

Mateus says he was surprised to see that not all Russians drink vodka, “because the media makes it look like that’s all they drink. In fact, we’ve met a lot of Russians who don’t drink.”

“Also the buildings here are really different, the ceilings are very high, almost twice as high as in Brazil, and the walls are very thick and the doors are big and heavy” says Caio.

Back in Brazil they were studying mostly technical subjects, but here at ITMO they’re expanding their horizons. “We are learning about economics and administration, as it’s important for us to develop skills that we can use as engineers but that aren’t directly related to engineering,” says Mateus, “We are also studying machine learning, which is important because a lot of complex knowledge needs machine learning to develop new things and it’s more about analysis, so you get the tools in order to help with data mining and research, which is very useful.”

As part of their semester exchange, they’re also studying the Russian language - which they find quite challenging. Most of them have never met Russians in Brazil, and so they’re not sure if they’ll ever need or use the language in the future, except Mateus, “In many parts of the world, you can speak English but in some parts, like ex-Soviet republics, they speak more Russian. Like in Poland, Romania, Kazakhstan, Uzbekistan, Tajikistan, and even Mongolia, a lot of countries in the East of Europe speak Russian. So it opens up the world. Also, Brazil and Russia are in the same economic group, BRICS, so i think it’s important to know the language.”

“They’re in Russia so they’re mostly learning about Russia,” says Sasha, their buddy, “but I’m also learning about Brazil with these guys. Before this, I just knew it was in South America, that’s all, and that there were the Olympics there 2 years ago, and now I’ve learned much more about the history and the culture of the country.”

At the dorms, the Brazilian students met many students from many countries, such as Kazakhstan, Egypt, China, Kyrgyzstan, France, Germany, Turkmenistan and more.

“In general, it’s really important for any person to know about other cultures.” shares Angelo. “Where we live it’s always summer, being here is my first time seeing snow, so it’s pretty cool to experience another language and different habits. This experience is important for me to develop as a person.”

The World Soccer Championship will be held in Russia this year, and to Russians, the real champions of soccer are Brazilians. If they will still be around and the tickets aren’t too expensive, they’d love to go! “In Brazil, football is played in every neighbourhood, you can walk outside and find a group playing and just join in.” says Caio.

More information about the exchange program at ITMO is available here.