ITMO University’s Russian Language and Culture Summer School, which took place this July, attracted students from the United States, England, Belgium, Poland, Germany and Taiwan. We caught up with some of them and talked about their experience. 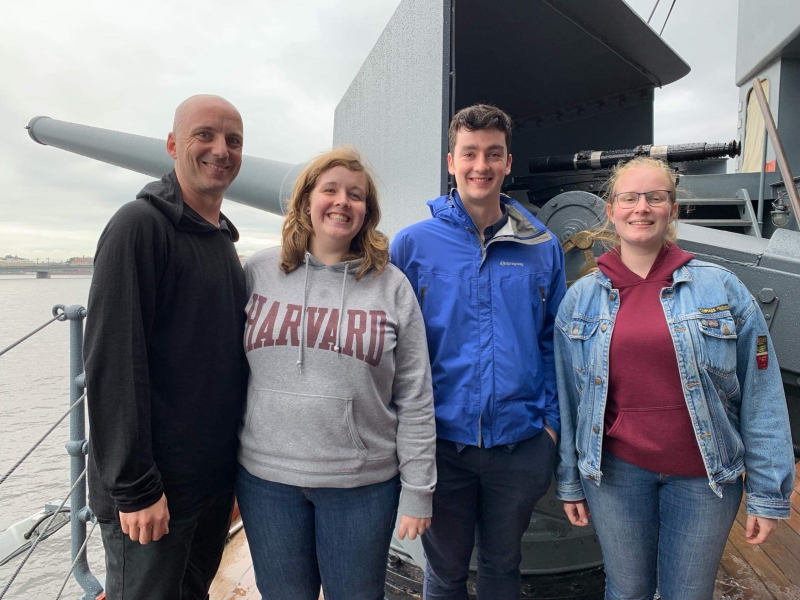 Jade Aernoudt and Romane Spiecart are first-year students from the University of Mons in Belgium studying to become Russian-English translators. They found out about this program through their university. Jade chose Russian out of all of the options available because it interested her the most. Romane had been interested in learning the language for a long time.

“I once saw a picture book for kids which was in the Russian language and I thought the language looked very interesting and beautiful with its different writing system, so when I had the choice to learn Russian, I took it,” Romane said.

Richard Burgunder from Pennsylvania in the United States works as a foreign affairs specialist and runs a private intelligence agency. His interest in Russia grew through his experience in working with Eastern Europe and Russia, and wanted to experience an educational and cultural immersion, as well as study the language. He had in mind something relatively brief but efficient, and ITMO had what he needed.

Paul Jones from the UK specializes in politics and international relations. He came to Russia because he believes that learning the language will help him stand out in job-hunting and will broaden his options.

“I believe Russia is the future,” Paul said.  “They have good government jobs, and a highly educated population. It will be a focal point, and play a bigger role in the future, so why wouldn’t you be interested in such a country.”

As first-time visitors to Russia, all the participants agree that this program has helped them immensely in understanding how the language is structured and formed. Richard notes that his reading and listening comprehension have improved. He has become observant and started to pay a lot more attention to dialogue and how to grasp it.

Jade and Romane have noticed a major difference in their approach to language learning. They feel that it has become easier to understand and learn the language. Jade also notes that she has acquired readiness to communicate in Russian, and is able to form simple phrases and sentences with ease.  Paul believes that this program has set a good foundation for him to continue learning Russian on his own. All of them feel motivated and have already made plans to continue studying the Russian language.

Jade and Richard agreed that the teachers have been very helpful and professional in their approach to their students. They listened to the needs of their students and arranged many interesting excursions.

St. Petersburg’s unique culture, colorful buildings and interesting architecture have left a huge impression on the participants. The people they have met along the way have helped them make some of the best memories.

In addition to learning and practicing their Russian skills, students have been to different excursions exploring the city both during their studies and their free time. Some of them even managed to travel as far as Moscow during their weekends.

“When you are abroad for a short time you become a lot more active in your everyday life and try to use your time more efficiently. I have been here for only three weeks but I have already been to Moscow, while some live here their whole life and never even once visit the city,” Paul said.

They were all mesmerized by the abundance of museums and cultural programs available to them. Paul and Richard note that the museums were very impressive. Richard was especially taken by the “Grand Maket Museum” since it reminded him of his childhood passion. Jade and Romane, on the other hand, marveled at the architecture of the city, and recollected the beautiful church of the Saviour on the Spilled Blood. Although they have explored many parts of the city, they still feel that there is a lot to see, which compels them to return.

Richard also observes that the Russian people are very helpful and open.

“During my first week here, I decided to walk back to my hostel, and ended up in a different area. I walked around for about 10 km, soaking wet, and freezing. I tried to do everything by myself due to the language barrier. But I finally figured out how to get back after talking to someone at a coffee shop. But on my way back it started raining again and the temperature dropped, and there were these two strangers who gave me their umbrella, which really surprised me. But I was very grateful because it started pouring, but I had an umbrella.”