Since 2016, ITMO University has hosted a Russian language summer school for language learning enthusiasts around the world. This year, from July 1 to 28, the school was held online for the first time with 22 participants from 10 countries including Canada, China, the UK, the USA and several countries in Europe. We talked to a few of the participants to learn about their experiences during the summer school and what attracted them to Russian language and culture. 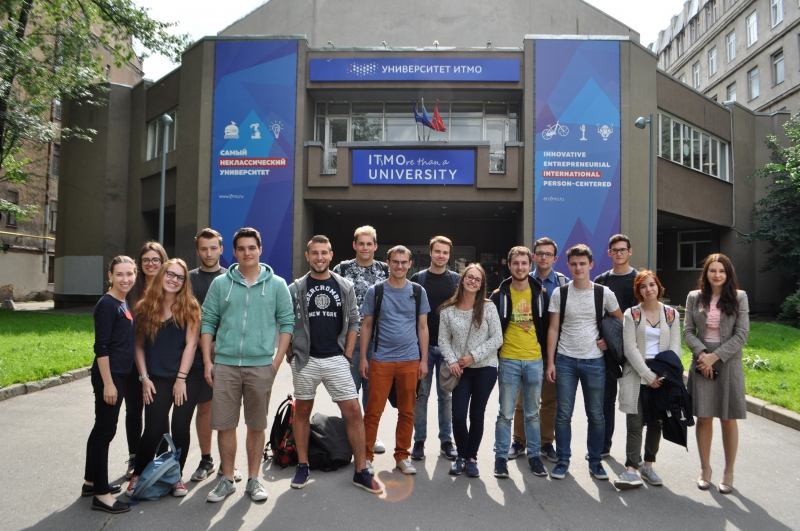 Participants of the 2017 summer school

Participants of the summer school could make their own tracks with several different classes on offer over a four week period. General Russian, grammar and conversation classes were offered for beginner and elementary learners with a class on Russian movies and another on Russian theater thrown in the mix for pre-intermediate and intermediate learners. More experienced learners were able to delve into such themes as Russian politics and diplomacy, modern literature, media, rock and history. Besides the courses on offer, all participants were invited to participate in an online walking tour of St. Petersburg, Russian cooking classes, and a special online tour of the Hermitage.

One of the participants, Laura Ponzo, is originally from France, but joined our summer school from Vietnam where she is currently teaching English. As a history major she has a strong interest in Russian international relations up to the 19th century. She has also previously travelled through Russia, on the Trans-Siberian Railway. Moreover, she has even read many Russian authors, including Pushkin, Tolstoy, Dostoevsky and Solzhenitsyn. She’s also watched her fair share of Russian movies, her favorite being The Cranes are Flying [Летят журавли]. These days, as she has more free time to learn new things, she decided to pick up Russian again and heard about this summer school through a former Russian teacher in Germany.

“Every time I started to learn the language in France or Germany I had to learn each ending and ask the teacher to practice it,” she says. “And in this course we don't only learn, but also practice a lot. We learned how to use the phrases we learned in real life.”

We also spoke to Sam Innes, who joined the summer school from London. He plans to move to Germany in the next academic year to study Slavic Studies and Computational Linguistics.

“I decided to learn Russian and study Slavic culture because I think it's so different and also something that is profoundly misunderstood in the West. There's not much dialogue between East and West at the moment which I think is a shame. And I find Russian literature just fascinating. Just the sociology behind it. The way that Russian writers manage to get inside the human soul. I would say my favourite writer is Dostoyevsky. He chimes with what foreigners think Russia is. His writing reflects their preconceptions about the country.”

Sam participated in two weeks of the course, attending both the Russian conversational course and the one on Russian cinema. He loves watching Soviet cartoons and has watched the well-known Russian movie The Irony of Fate. Sam hopes to do his Master’s in Russia one day or come for a shorter program, where he wants to explore Siberia, the Caucasus Mountains and even go as far as Kamchatka!

Teodora Boboc is an avid Russian language learner from Romania and hopes to become a translator in the future. Her interest in studying Russian actually stemmed from watching a Russian TV series called Poor Nastya [Бедная Настя] which is very popular in Romania. But what interests her most about Russian culture is the cuisine. Her teacher told her about this summer school.

“At the summer school, I learned specific terms that I needed for translation. This is a very difficult but also interesting topic for me,” she shares.

During her studies at university she learned Russian from Romanian teachers, and the summer school was the first time she had teachers from Russia.

“I liked the school because it was interesting to communicate with native speakers. This is completely different because everything is more natural. There is a language barrier but Russian teachers are very encouraging with foreign students. Even if we make mistakes they say “It’s all good, don’t worry, it’s a common mistake, let’s do it again”

Teodora has never been to Russia but hopes to visit the country one day.

Qinghe Zhao is originally from Haninan, China but she joined the school from Paris, where she is currently studying interior design. She has been teaching herself Russian for over two months now, and decided to take the opportunity to participate in the full four-weeks of the school.

“For me, the highlight of the course was when my teacher introduced us to Russian music. Especially when I heard a band that I liked during the lesson, which made the course even more interesting to me. Besides, I also enjoyed it when we discussed the differences between cultures, I was able to speak more about the topics that interest me,” shared Qinghe. “If I have time, I will definitely participate in the school again. Also, I hope that I can take the course and live in St. Petersburg for a while to improve my language.”

This is not Qinghe’s first encounter with the Russian language and culture, as she interacted with many Russian tourists in her hometown in China and is interested in Russian literature, theater and musicals.

Daniel Tyshler is a high school senior from Seattle in the US. He first encountered the Russian language from his grandparents who started teaching him Russian. His language level is already quite advanced but over the four weeks of the school he recognized that it continued to improve. He took part in modules on Russian politics and diplomacy, modern Russian literature, Russian mass media and Russian history, and was able to speak fluently during the lessons.

“The ITMO online classes have been very interesting. It is exciting to learn about Russia-related topics from the Russian perspective. The teachers are very passionate and knowledgeable, and my fellow classmates were also eager to learn and were very friendly. All the courses I took inspired me to learn more about the subjects. Overall, it has been very enjoyable,” he shared.

You can read about the experiences of last year’s summer school participants here. For more information about the summer school in Russian language and culture and the application form, click here. This winter will be the first time that we’re offering a winter school in the Russian language and culture, so if you’re interested to polish up your Russian skills, check out more information here.

Participants were interviewed by Arina Sekacheva