Ippolit Markelov has visited ITMO with a series of science art workshops for ITMO’s Art & Science Master’s program. Over the course of two weeks, the students learned the many ways they could use micro-, molecular and neurobiology as well as genetic engineering in their art projects. Read on to discover how scientific research can become art, what makes a science artist and what are the main objectives of this unique field today. 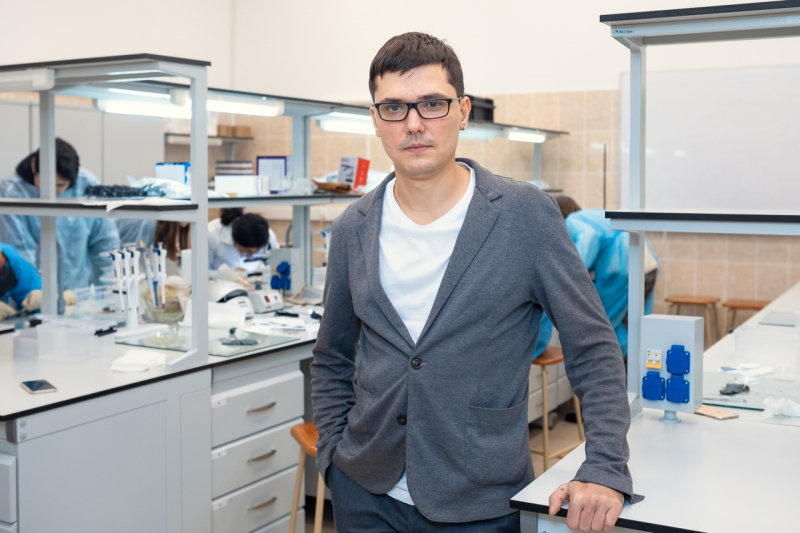 Ippolit Markelov, a PhD in Biology from Lomonosov Moscow State University, is an artist and the founder of the 18 Apples science art group. His research interests are interspecies communication and the transformation of live objects. His projects combine scientific and artistic methods; he often employs neurobiological and bioengineered systems.

He is a member and participant of Ars Electronica (Austria), SymbioticA (Australia), GOSH (China), Ural Industrial Biennale of Contemporary Art, Moscow Museum of Modern Art and Garage Museum of Contemporary Art. He was also awarded a grant as part of Garage’s Art and Technology grant program 2016/2017.

First, tell us more about your latest workshop at ITMO. What subjects did you explore with your students?

There were several workshops with topics covering the basic biotechnological methods such as, for example, isolating and transforming DNA as well as creating transgenic microorganisms. The last workshop in the series was on neurobiology. Using two model organisms as our case study, we observed the function of their nervous system and various neural interfaces. One of these organisms was Blaberus giganteus, a cockroach from the Blaberidae family. Their nervous system is organized differently to that of humans.

In our experiment, the neurons of the insects’ antennae were electrically stimulated. We then implanted invasive electrodes into the antennae they use for spatial orientation. Afterwards, we used a special chip which connected us directly to the insect’s nervous system and observed its reaction to electrical stimulation. Within the framework of this experiment, we studied neuroplasticity. It was important to understand the way a cockroach’s nervous system responds to impulses, as well as processes and filters them.

On the other hand, there was an artistic objective as well, because this experiment presents a lot of grounds for discussion. We look at the interaction between the human and the insect nervous systems. The second neural interface we used in this project was a brain-computer one that allowed us to register “commands” from our subjects based on their EEG analysis.

By combining these systems we ended up with a rather interesting experiment at the intersection of art and science. Our interaction with the insects was based on an unconditioned avoidance reflex of the touch receptor. We replaced the actual nervous impulses from the insects’ antennae with the ones we received from the brain-human interface. The insects were able to correctly interpret these new signals for a while, but then the signals were ignored as their information was not supported by that of other receptors. When the false signals repeatedly receive no proof from other senses, the nervous system learns to block them and the insect stops reacting to orders.

As far as I know, this was also a part of Mindcontrolled cyborgroach, your first project, which featured Blaberus craniifer, another cockroach species from South America. How did you come up with this idea?

Yes, we started working on the project around five years ago. It started with a very simple idea: combining two systems, two neural interfaces, is fascinating and it hadn’t been done before – at least we hadn’t seen it – so why not do it? Only after we had immersed ourselves in this process and started analyzing our results, did we see the many aspects behind a simple idea such as the philosophy of mind and other issues of insect physiology and behavior.

Working with a brain-computer interface, we see that some of our cognitive processes can be captured and described. It was captivating to notice how the process of expanding the threshold of sensory perception during the interaction with a neural interface is not unlike the processes activated while learning to drive. After many hours of practice, amateur drivers start to feel the dimensions of the car, which allows them to drive easily.

When you use a neural interface to manipulate a virtual object, your mind is trying to solve a similar problem. At a certain time you start associating yourself with the object you need to manipulate. It’s quite handy for practical problems, like when you navigate a drone or a robot. In this project, however, we went a bit further and tried manipulating a biological object, an insect. Imagine associating yourself with an insect, seeing yourself as a beetle. There is something Kafkaesque about it.

After finishing this project, we were able to turn it into a research initiative. Instead of a neural interface and a human we used a self-learning neural network.

Here, we look at insects as a species capable of solving complex problems, such as navigating a maze. The more time an insect spends within the maze, the better it gets at escaping from it. It means they can learn. If we put a camera above the maze to record the movement of our “subjects” inside, we could use these recordings to teach a neural network. Combining these two systems, we get a single self-learning one consisting of two components: an animate and an inanimate one. We created this complex system that became the core of the PhD thesis of a member of our art group.

Like you rightfully pointed out, cockroaches are something very Kafkaesque. But why did you choose these insects? Was there an initial artistic concept behind this choice or are they simply easy to work with?

There is a whole cultural background behind this choice and insects in general. But this particular cockroach species is also rather convenient to work with, because they are large and easy to maintain. They are usually bred to feed reptilian and amphibian pets.

As I’ve already said, Blaberus giganteus have human-like neurons, although significantly less of them: this species possesses only around 1 million such neural cells, whereas humans have around 80-100 billion neurons. Such complexity is responsible for our abstract thinking, language processing and the ability to create neural stimulation systems. The insect nervous system is decentralized with ganglias (nerve knots) placed in different body regions. Blaberus giganteus have a big ganglion in their heads, which can be called a brain. Even though our nervous system is radically different from that of insects, separate neurons have the same structure and functions, which allows us to learn more about our nervous system by studying that of insects.

There are many similar projects, for example, in the US and Japan, which employ similar systems to work with scorpions, hawk moths and dragonflies. For instance, a research group from Nanyang Technological University, Singapore, has demonstrated impressive results in controlled beetle flight.

Your art group, 18 apples, started as a collaboration of an artist, a molecular biologist and an IT professional. Is this a box-standard for a science art group? What does a typical Russian science artist look like? Is it a scientist who has decided to turn to art? Or rather, an artist collaborating with scientists?

It’s a tough question. I would say there is no typical image. Every artist has their own personal story. The one group that stands out for me is Where Dogs Run. It is a truly interesting collaboration, and all of their projects are a combination of their ideas.

Sometimes it is the scientist who wants to explore an artistic concept, but more often it’s the other way around.

How did you yourself get the idea that you don’t want to be a traditional scientist, but want to be involved in art projects after getting your PhD?

After my thesis defence, I focused on my passion for modern art. I’ve been interested in art since primary school, I even graduated from an art school specializing in sculpture. I continued working in this field after graduation and even wanted to enter one Moscow’s many art universities.

But then I realized that there was no point wasting another six years on polishing my technique. Especially when I already had all the tools to develop more comprehensive and ambitious projects. Moreover, after getting my PhD, I attended courses on modern art at The Russian State University for the Humanities and International University in Moscow. This led me into the art community. So, it was a gradual transition.

Coming back to the way art projects are created. You said that sometimes the idea comes from the scientists. But how open is the scientific community in general to artists that come up with ambitious creative ideas?

We are not usually warmly welcomed by the scientific community. It mostly depends on the person we approach and how open they are to something new. Here, the stumbling block is usually the fact that people think about science art in terms of art as it was one hundred years ago.

For example, for the majority of my scientific colleagues Malevich’s Black Square is on the edge of their understanding, not to mention some more contemporary pieces. But when you start telling them about the many branches of modern art bit by bit, describing their evolution, people usually become interested in taking part in a brand-new interdisciplinary project.

I’ve come across an opinion that science art could be a great way of science communication. Do you see it in that competence? And do you think that this field in general needs to have an objective?

Science communication is one of the minor but necessary functions of science art. When we initiate a dialogue with the scientific community, we can easily access this field. It’s hard to define science art. To be fair, I am more of a practitian than a theorist. But I think that first of all, it’s an interdisciplinary field which equips you with a number of tools to study the world from a different perspective, broadening your horizons.

The first Bio Art Lab opened in the School of Visual Arts New York City in 2011. It provided art students with scientific tools and methods. Many Art & Science programs have opened in different countries since then. The first Russian program of the kind was created at ITMO in 2018. Would you say such specialists are in demand in Russia right now?

I hope that this program at ITMO is now teaching the artists and curators that will form the base for this field in Russia. Frankly speaking, I personally only know around a dozen people from the Russian art community who are involved in Art & Science projects. But they are more focused on media art. Even fewer people create actual science art projects. I expect ITMO Art & Science students to really bring this field forward.

How can they contribute to this development? Is there an interest for science art in business, for example?

It’s hard for me to answer this question, but in my experience there are a number of grant programs and interdisciplinary projects supported by major corporations such as BIOCAD.

It’s an ongoing process: businesspeople are starting to understand how prestigious it is to be a benefactor, while funding interdisciplinary art projects does wonders for their reputation. I think there will be more and more similar initiatives in the future.

You’ve been collaborating with the team of ITMO’s Art & Science Master’s program for several years now. What are your future plans for this partnership? Any upcoming educational projects?

Apart from ITMO, I have something planned at Skolkovo, a program where startups and modern artists could collaborate. Now we are looking for possibilities to fund such collaborations. I hope that students will be happy to take part in this project.