Cities on the Moon, Villages on Mars: What's Stopping Us?

Why hasn’t humanity managed to reach new planets in the past 50 years? What factors affect our ability to travel to Mars? Alexander Shaenko, PhD, a science popularizer, answered these and other questions about space exploration as part of his open lecture. 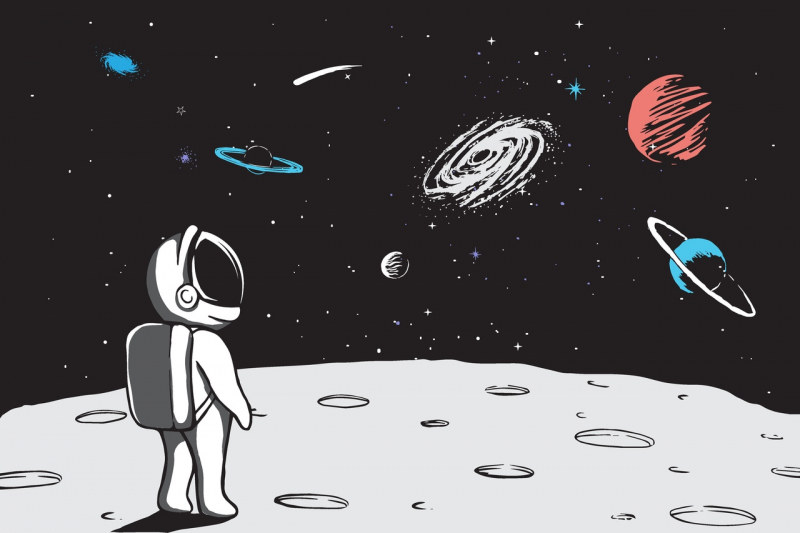 For the past half a century, humanity has been standing on the verge of settling new planets. Many scientists believe that the only thing that holds us back is money. While it’s true that you do need a lot of it, there is another crucial problem: as of now, we aren’t able to live away from Earth. It’s hard to imagine a functioning industry on another planet. Food and water would likely be stored, not produced. If we really want to live on other planets, then being a mere colony of Earth is not enough.

Is the current level of space exploration sufficient for actually inhabiting it? Not quite. For a start, we should create an artificial biosphere which would be able to function both on Earth and in space. It should be independent and self-sufficient.

Nowadays, space exploration is characterized by:

The real breakthrough will only happen once a trip to another planet will become as mundane as intercontinental travel.

Cities on the Moon and villages on Mars

What should we do in order to be able to build cities on the Moon and villages on Mars?

Implement new energy sources. We need nuclear and thermonuclear reactors, reactors based on annihilation of matter and antimatter, and photonic engines which would allow us to decrease the duration of trips from months to hours or days.

Design and produce in space using local resources. For example, we should be able to produce parts needed for construction right there instead of bringing them from Earth, as it would take weeks or months if we’re talking about deep space. It’s faster and easier to produce – until we can do it, we won’t be able to actually explore distant planets.

The progress so far

ITER (International Thermonuclear Experimental Reactor) is a project for an international experimental thermonuclear reactor which is being constructed at the Cadarache research center in France. The plan is to complete it by 2025. Its budget has reached 19 billion euros.

Nuclear rocket engines RD-0410 and NERVA had passed ground testing but were never used in space. These reactors passed the tests successfully and produced a specific impulse twice as powerful as the current chemical ones. However, both inventions were scrapped.

Single-layer carbon nanotubes by the Russian company OCSiAL are a promising invention that could be used as a construction material.

A year-long Chinese isolation experiment at the Lunars Palace facility. It was completed successfully in 2018. A crew of eight members had been living in several rooms for 12 months. A self-sufficient substance cycle was created there. It allowed 98% of substances to be produced inside while only 2% were imported.

3D printing with continuous carbon fibers. An invention by the Russian company Anizoprint which allows us to produce complex and durable plastic parts.

Life-support systems and their role in future space exploration

There’s no doubt that scientists and engineers work on creating energy sources, materials, and conditions suitable for deep space exploration. One of the promising technologies is biological life-support systems.

Before the era of space exploration, life-support systems were meant to provide the crew with oxygen. When people began to travel by balloons filled with light gases like hydrogen or helium, it turned out that you can’t breathe once you climb high enough. That’s why the crews used oxygen from gas cylinders and carbon dioxide was chemically destroyed by calcium hydroxide.

The first life-support systems were used on Sputnik-2 and the spaceship Vostok. They consumed carbon dioxide and produced oxygen on board because the duration of flights increased and it was irrational to bring lots of cylinders. However, food and water were stored.

In 40 years (since 1961) the duration of flights increased from 1.5 hours to 400 days (an expedition to Mars would take 500 days). When it comes to long flights, it’s important to use what’s available on board as much as possible.

Partially closed life-support systems. For example, the one on the Mir space station. Oxygen was produced on board and water was partially recycled from moisture and urine, while carbon dioxide was consumed by zeolite. Food supplies were stored.

Closed life-support systems, such as the BIOS-3 project. In this case, oxygen is produced, carbon dioxide is destroyed, and both water and food are synthesized (regenerated or grown) in space. Chlorella, a microalgae, is especially promising in this field, as it is resilient to external influences.

Closed biological life-support systems are ones that would allow us to create an artificial biosphere in space to produce oxygen, food, and water, as well as dispose of carbon dioxide.

However, there are several obstacles:

Alexander Shaenko also talked about his 435nm project which is focused on growing microalgae.

“Apart from space, micro seaweed can be used on Earth, too. The volume of this market is $500 billion (in comparison, the yearly budget of NASA is $10 billion) and it grows 15% a year. In 2016 we began to build experimental photobioreactor installations (200, 401, 402, 402.3) in order to work on the modes of Chlorella cultivation,” says Alexander Shaenko.

What are the current outcomes?

What remains to be done?

Caption: News from the reactor :) Filmed by Anton Alexandrov.

Alexander Shaenko, PhD, is a science popularizer who took part in the development of carrier rockets Angara A5 and KSLV, the Millimetron space observatory, and the DX1 private satellite for Dauria Aerospace. He was the main engineer of team Selenokhod and is now the head of the 435nm project.

You can find the full lecture here (in Russian). It was arranged by the Your Sector of Space (“Твой сектор космоса”) community.