How does particle physics help us explore space? What great challenges are scientists still facing? And what are they going to do next? Steven Weinberg, a Nobel Prize-winning physicist and science popularizer, addressed all these issues at the NAUKA 0+ Festival. 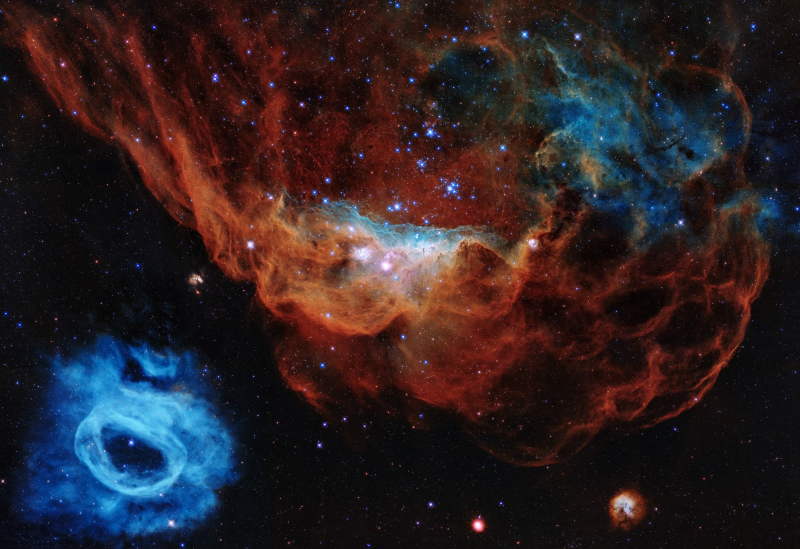 The differences between some of the quantities modern physicists are working with are fascinating. On the one hand, scientists are looking into processes occurring at the smallest particle level, and on the other, in the properties of our world on the scale of the entire Universe. At the same time, there is a chance that researchers can find all answers to fundamental scientific questions precisely at the level of quantities smaller than an atomic nucleus.

At least that is the opinion of Steven Weinberg, one of the most well-known theoretical physicists of our time who was awarded the 1979 Nobel Prize in Physics for “his contribution to the theory of the unified weak and electromagnetic interaction between elementary particles, including, inter alia, the prediction of weak neutral current”. But exploring the microcosm is far from easy. The professor is confident that even with all the technological resources of the world scientists still do not know where to begin.

“A major challenge for physicists is that the energy needed to probe what is actually going on at the smallest levels is far beyond current technology, something like 10 trillion times the highest energy we can harness now,” said Prof. Steven Weinberg in one of his lectures.

During his talk at the NAUKA 0+ festival, he shared his thoughts on the history of microcosm and macrocosm studies, their current state and prospects, as well as their similarities. Scientists are trying to come up with new generalizing theories. That is why it seems especially relevant to discuss how the physics of microcosm and macrocosm interact with one another and help scientists learn the laws of nature.

On progress in physics

Back in the 19th century, scientists believed that our galaxy was the entirety of the universe. And until the early 20th century, they showed no interest in nebulae that “prevented” them from observing comets – which were their main astronomic interest.

In 1912, the American astronomer Henrietta Leavitt noticed the Small Magellanic Cloud (SMC) and within it, Cepheids – a special type of stars that brighten and dim periodically. The intensity of their light and movements made it possible to understand how far they were from us.

In 1923, the American astronomer Edwin Hubble, whom the famous space telescope is named after, discovered similar variable-luminosity stars in the Andromeda Nebula. Using the correlation of light and period, he figured out that it is a million light-years away from Earth. Thus, he proved that there are other clusters of stars, although later astronomers learned that Hubble miscalculated and they were about twice as far away as expected. Despite this, it was then that astronomers had realized that other galaxies exist at different distances and in all directions from us.

The scale of the universe has expanded to incredible sizes and now we understand that it will not be possible to cover it all even with the newest devices even though astronomers can see objects located at a distance of billions of light-years. However, the observation limit of 14 billion light-years has not yet been surpassed.

At the same time, at the other end of the measurement scale, at the micro level, there was progress in physics. Somewhere around 400 BC, the philosopher Democritus proposed the idea that matter consists of atoms. Of course, he could not prove anything, he only knew that they were too tiny for the human eye. In the 19th century, measuring the size of atoms became a big challenge for physicists and chemists. Today, science has come to the study of the atomic nucleus.

Steven Weinberg compares an atom’s structure to the solar system.

“An atom also consists mostly of “empty” space. Electrons revolve inside an atom like the planets of the solar system. At the center of the atom, by analogy with the solar system, there is a nucleus, which contains almost all of its mass and a positive electric charge,” he says.

The smallest distance that scientists can explore today with existing accelerators is about 10 to the minus 16 centimeters. This is how far people have been able to expand the boundaries of the study of physics.

Moreover, we tend to think that we understand what is happening there and can even specify the forces acting at the micro level. For this, we use a standard model – a theoretical method that describes the structure of elementary particles and the interactions between them. It includes a description of three out of four basic physical interactions: electromagnetic, weak and strong – all three occur at the microcosm level.

According to Steven Weinberg, it is at such distances that we face the problem associated with the energy of empty space, which is also called dark energy.

“Empty space cannot be absolutely empty due to Heisenberg’s uncertainty principle. This is the principle of quantum mechanics which states that for a quantum particle it is impossible to simultaneously determine the coordinates in space (position) and its momentum (velocity). The same applies to fields: it is impossible for a field at one moment to have a certain value and change this value. It means that we cannot say how an electromagnetic field acts as it changes its value, it can be different, and we cannot predict it.”

This means that even if at some moment in time the energy of space is zero, we cannot accurately know whether it will be so in the next moment.

On the universe’s expansion

Since the early 20th century, space researchers have predicted the expansion of the universe. For instance, in 1913-1914, the American astronomer Vesto Slipher studied the Andromeda Nebula and other celestial objects and found that they move relative to the solar system at tremendous speeds. More importantly, almost all of them move away from it.

Then, in 1927 Georges Lemaitre, followed by Edwin Hubble in 1929, deduced laws for the expansion of the universe. In 1998, the latest discovery proved that the universe is not expanding at a constant rate, but faster and faster. For this theory, astronomers Saul Perlmutter, Adam Riess, and Brian Schmidt received the 2011 Nobel Prize. In 2019, Riess, along with a team of other scientists, showed that the universe is expanding even faster than he previously thought.

It is still impossible to say for sure what exactly increases this speed, however, many scientists assume that this is due to the so-called dark energy. This is the energy of the “empty” space between galaxies, which creates a certain force that makes them move away from one another. After all, the universe has been proven to expand with acceleration, and energy is needed to accelerate. Moreover, the scale and rate of expansion of the universe show that this energy of empty space is colossal.

“Our understanding of physics down to the smallest particles indicates that there must be a certain energy density of empty space, and many physicists of the 20th century concluded that dark energy, the energy of empty space, is so much less than one would expect. The expansion of the universe can only be explained by the existence of the energy of empty space, which dominates regular and dark matter” explains the scientist. “It means that our calculations were wrong and only when we applied the methods that we use for the microcosm did we understand how the macrocosm exists. And now we are facing a fundamental physical problem: how to combine physical hypotheses about the smallest quantities and distances with the cosmological scales that we study, such as for example, the magnitude of dark energy.”

Steven Weinberg jokes that another similarity microcosm and macrocosm share is that research in these fields is very expensive. He hopes that the public's interest will show governments that they need to support future physics research.

“What we need to do is expand our observations over huge distances and find out if dark energy is constant over time or if it is decreasing. It is a big task that requires time and money,” the scientist concludes.

Steven Weinberg's lecture took place as part of NAUKA 0+, a Russian educational event held annually from October to November in 80 Russian regions at more than 400 sites. The event is held by the Russian Ministry of Science and Higher Education with the support of the Moscow Government, Lomonosov Moscow State University, and the Russian Academy of Sciences.