What Birch Bark Manuscripts Tell Us About Russia’s Past

Birches are one of the national symbols in Russia but in the past, they also had a very practical application: their bark was used for writing long before paper became an everyday item. Thankfully, some manuscripts have survived many centuries and researchers keep revealing their secrets. 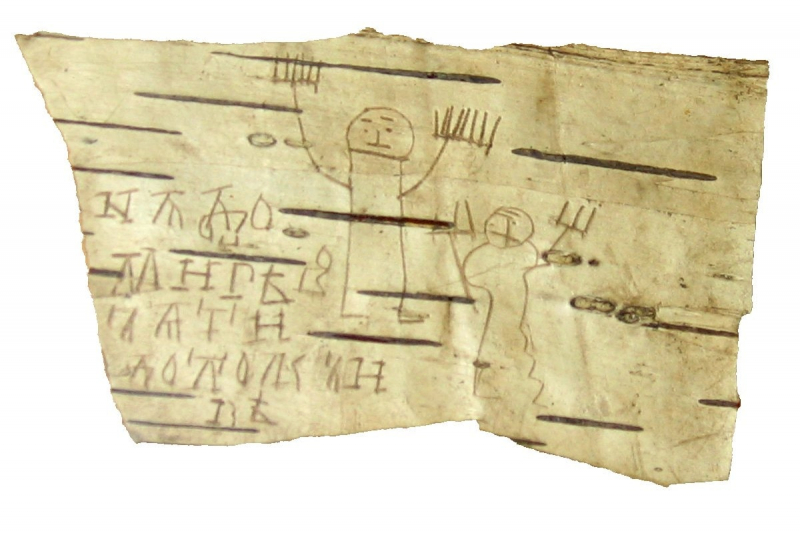 Manuscript no. 202: spelling lessons and drawings by Onfim. Credit: commons.wikimedia.org

Ever wonder how people of the past communicated with each other? How did they propose, argue, and arrange trade? Some answers to these questions can be found in birch bark manuscripts (or берестяные грамоты in Russian).

They are an invaluable source of information on the ancient Russian lifestyle and culture. Dating back to as early as the 11th century, they have amazingly survived hundreds of years and are still found today to share ancient stories with us. There are several common categories: business records, literature and folklore, official documents, letters, educational texts, labels, and church texts.

The city most commonly associated with birch bark manuscripts is Veliky Novgorod – more than a thousand pieces were found there. This is not only because this city was an important trade and administrative center, but also because it was built on soil with peculiar chemical qualities that allowed it to preserve artifacts.

Plus, no ink was used while writing them – the words were scratched on birch bark and therefore haven’t faded over time. For scratching, people used special tools called pisalo, a kind of stylus. Until the first manuscript written without ink was found around the middle of the 20th century, their existence was only a hypothesis, and researchers didn’t realize that the tools they’d found were created for writing.

Excavations of Novgorod started back in the 1930s but were interrupted by World War II. The first manuscript (created without ink) was found in 1950 but the archeological work continues to this day. After each productive season (not annually, as sometimes there are too few new findings), researchers give lectures on their recent discoveries and the room is always crowded. Andrey Zaliznyak, one of the most prominent Russian linguists, was the main researcher of birch bark manuscripts and delivered them until his passing in 2017.

In his lectures, the scientist not only reported on new findings, but also thoroughly discussed each text and speculated on the context and features of found documents in a fascinating way – he truly brought ancient stories back to life. Nowadays, his colleagues continue his life’s work and you can watch the recordings of both old and recent lectures here (in Russian) or check out the manuscripts here to gain a greater insight into their mysteries.

Indeed, deciphering these ancient scrolls is quite an adventure. Obviously, the language and writing system has changed drastically over the centuries. For example, there were no punctuation or spaces between words and for everyday writing, people used ъ instead of o (e.g. мъре instead of море – “sea”). The process of decrypting each manuscript can take ages. However, one of the most fascinating conclusions you reach when reading the manuscripts is that the language might’ve changed, but the people – not so much.

Take, for instance, this manuscript from the 13th century. It’s a marriage proposal from a guy called Mikita to a girl called Malaniya. One might assume that back in the day, that’s not how it was done and the young man was supposed to receive the girl’s parents’ blessing and launch the long process of matchmaking, but apparently that wasn’t always the case!

Another famous finding is a group of manuscripts written by a 13th century boy called Onfim. They contain his notes and drawings. What’s so interesting about them? The way we can see how a little boy (it’s assumed that he was around seven years old) who lived about 800 years ago studied, played, and dreamt.

For example, there are autoportraits of Onfim in which he looks like a warrior destroying his enemy, and drawings of peculiar creatures and animals captioned with something along the lines of “I’m a beast!” They also have holes on one side, which allows researchers to conclude that the boy probably wove a thread through them and wore these drawings while playing to indicate that he is, indeed, a beast.

This is only a tiny portion of facts about birch bark manuscripts – there are countless interpretations and conclusions made by historical linguists and it’s truly amazing how much information we can extract from documents that often contain just a few lines.