City of the Stolovaya — a Culinary Journey Through St. Petersburg’s Greatest Dining Phenomenon

One of my earliest dining experiences in Russia came during my first trip to Moscow, over twenty years ago. After a gruelling day tramping through the city — then still in the midst of chaotic transformation — my guide decided to treat me to a blast from the communist past that she said would certainly soon be consigned to the dustbin of culinary history: the stolovaya 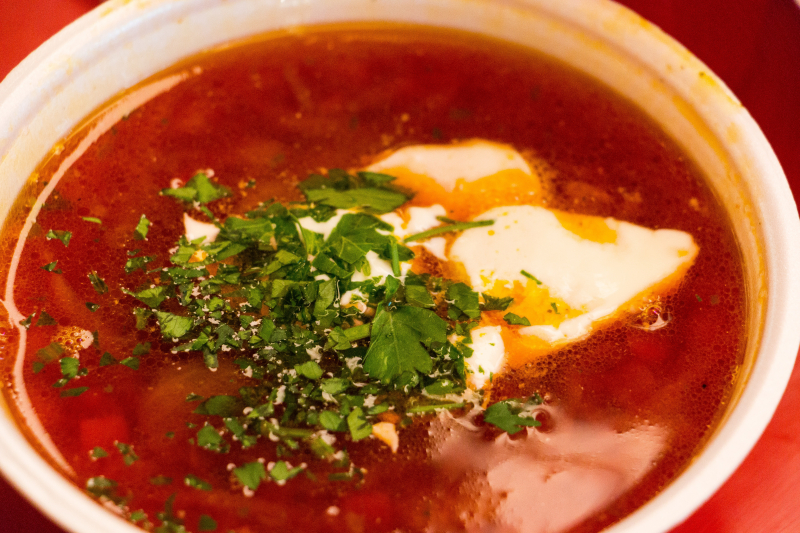 I was led through an arch in one of the more imposing Stalinist-era blocks on Tverskaya Ulitsa and down a dizzying number of anonymous corridors. There was absolutely no indication of a restaurant or cafe of any kind, not even the most basic sign: "How would anyone ever find this place if they didn't already know about it,' I queried. "They wouldn’t,` she replied, breezily leading me through a nondescript door into the stolovaya inner sanctum.

My first impression was that I had been transported back in time to a school canteen in the 1950s. Behind the scruffy metal cabinets was a large, intimidating throng of dour female servers — recalling dinner ladies — all glowering barbarously at the row of queuing customers/victims. On display were a limited selection of unappetizing salads: basic beetroot, anemic "olivier,' marbled with chunks of processed pink meat, and the obligatory "Selyodka pod Shouboy' or "Herring under fur coat', which was fine until you reached the slimy, salty herring lurking beneath. There were huge steaming vats of weak Borscht and greasy Solyanka, both with unidentified grey meat floating on top.

But most queasily memorable of all was my first encounter with Kompot, the only beverage option available, served up room-temperature rows of serried glasses. First of all, the pure shocking sweetness was like a blunt-force assault on the taste buds. At the same time, it somehow tasted watery as if actual fruit had not passed this way for some time. Yet, there they were, furtively stirring at the murky bottom, accusatory chunks of apple, or perhaps pear, dumped straight in from cans in all their processed, ultra-sweetened glory.

I emerged, somewhat nauseous, even hungrier than before, vowing never to darken the unmarked door of any Stolovaya ever again.

Well, either Russia has changed immeasurably since then, or I have — or both! — but the humble stolovaya is now my eating out option of choice. True, the institution has largely died out in Moscow, apart from the MuMu franchise, which is a pale and more expensive imitation. Property prices, competition from swish western-style chains like Prime and Coffee House, and the expensive tastes of the capital, have effectively killed off the Stolovaya there, at least in the centre.

But in St. Petersburg, the situation is altogether different. This is Stolovaya Central, with examples of all descriptions on practically every street. Most have received a significant upgrade since the days of the USSR, but the essentials are still the same. Simple hearty Russian-style food served no-frills buffet style and at extremely economical prices. Often you’re expected to clear away afterwards, an acceptable trade-off on affordability. In many Stolovayas, it’s possible to have a full three course meal for about 300 roubles (one of the peculiarities of sanctions in Russia is that it’s often cheaper now to eat out than to buy ingredients and cook at home.). There are even speciality Stolovaya options such as Vegetarian or Eco, while some emphasize ethnic cuisine.

Perhaps the most popular and ubiquitous is Stolovya No. 1, which has branches all over the city, most notably at Vladimirskiy Prospekt., 23, Nevsky Prospekt, 54, and Sennaya Square, 6. Many locals steer clear of this place, claiming that it’s a breeding ground for dangerous microbes. But apart from having to shake the water off the cutlery, I’ve had few problems, gastroenterologically or otherwise. The salads are a little skimpy but the soups are great and there is a perfectly serviceable selection of Plov (an aromatic, sauteed Uzbek dish, made from rice, carrots and meat), Bifshteks (beef steak transliterated and appropriated), Kotleti (Russia's take on a bunless hamburger), and Yezhik (not real hedgehog, thankfully, but a kind of rice-impregnated meatball that borrows the little spiky creature’s Russian name.)

The Pirogi or pies are well above average and garnishes are absolutely fine: Purei or mashed potato and grechka or buckwheat, both of which are difficult to mess up. Overall, with the addition of some of their strudel — which comes in cherry as well as apple — you can have a perfectly decent, no-frills meal here that is tasty, ridiculously cheap and relatively healthy in a simple down-to-earth way not readily found in the fast-food, "back-factoried,' deep-fried urban dining landscape of other major cities.

Another Stolovaya chain offering more variety and frills is Tarelka or Plate, which can be found at ul. Marata, 19, Izmaylovskiy pr., 9/2, and just across the road from ITMO’s city centre campus on ul. Lomonosova, 20. While the soups here are a disappointment, there is great regular-restaurant-standard Bitochek (chicken cutlets), and Okorok (gammon) as well as proper kebab on a skewer and creamy stroganoff. One dessert treat here is something erroneously named Fruit Salad, which is actually liquidized mango and kiwi — surprisingly delightful. Speciality teas with ginger and berries are also available, plus, miraculously, kompot that goes easy on the sugar and doesn’t taste too bad. And while Stolovaya No1 deliberately retains Soviet overtones, the decor in Tarelka is contemporary and relaxed.

With the Russian boom in health food and bio-supermarkets, it was perhaps inevitable that someone would come up with the concept of the Eko-Stolovaya. Located on pr. Rimskogo-Korsakova, 8 near Sennaya Ploshchad, the sign hanging outside boasts ingredients from "Semeinaya' Eko Farm in a town called Ryabizi, just outside Gatchina. The breakfasts are poached, fried and omleted from their own locally eko-produced eggs, but apart from beefshteks and tefteli meatballs, nothing else seems to come from the farm, which is a disappointment. And in every other respect, it’s a really bog-standard, minimally decorated, unremarkable stolovaya, which makes it difficult to recommend.

However, if you want a truly exemplary health-stolovaya option, look no further than the excellent Rada & K on ul Gorokhova 36. While some might argue that it’s closer to being a regular cafe, the basic stolovaya elements are there, from the buffet service to familiar menu items, all given a unique vegetarian re-interpretation. There’s irresistible Plov made with fruit and soy meat and Shuba salad — which made an unwelcome appearance during my first ever stolovaya encounter — now entirely and delectably re-imagined with the help of potato, beetroot and, wait for it, Japanese nori! The soups are just as marvelous: sweet Indian daal and silky spinach. Juices are squeezed on the spot, including tangy grapefruit and conscience-salving carrot. Plus there is a fantastic selection of relatively healthy sugar-reduced sweets and tarts. As long as you don’t mind being served by cool kids with tattoos and piercings, Rada & K is unequivocally one of the best places to eat — vegetarian or not — in the city.

There are also some good independent stolovaya’s dotted around. At Moskovsky Prospekt 32, near Technologisky Institute metro, they do great dolma or stuffed vine leaves and spicy Kharchu soup. At Lomonosovo 18, there are lovely pastries. Stolovayas are simply everywhere, an unswervingly democratic culinary phenomenon feeding the wealthy and the poor alike with food that is genuinely, benignly patriotic. And while still an acquired taste and not quite poised to take over the world in the manner of the Pizzeria or Sushi Bar, let’s hope that it continues to thrive here in St. Petersburg.