The Hermitage: Getting the Full Picture

Art is never boring. You just need to approach it right to fall under its spell. What you’ll be rewarded with is a whole new (but at the same time, wonderfully age-old) world of beauty, nuance, character, and history, as well as a potentially great new hobby and topic for small talk when the weather just doesn’t cut it anymore. How do I find that approach, you ask then? Here's how to make museum-going less of a yawn and more of a yay, through the example of Russia’s (no hard feelings) best museum, the State Hermitage. 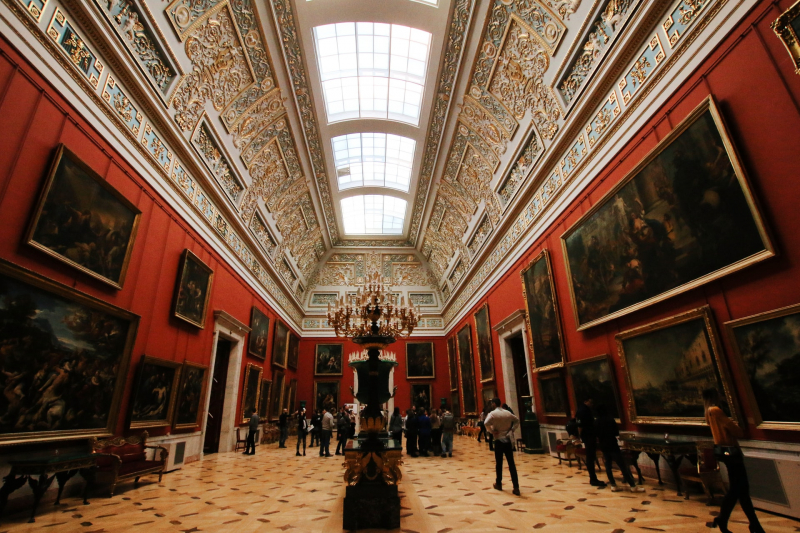 Winter Palace, aka the main building of the State Hermitage. Credit: top-n.ru

With over 200 first-rate museums in tow, and some second to none, time-defying architecture that has been considered worthy of UNESCO World Heritage status, St. Petersburg basically is one big museum itself, and there’s no way you could avoid a trip to a house of arts if you visit, or live in, Russia’s cultural capital. The city’s all-permeating sophisticated ambience or that visceral touristic instinct bidding us to mindlessly cash in on ugly magnets and go places will do the trick. And if that won’t be enough, our temperatures, which are, let’s put it that way, a bit worse than those in the south of France, will make you glad to find solace at whatever building you happen upon (and as you already know, there’s a high chance this will be a museum).

Have you brought yourself to accept this rock-solid fact? Good. Here’s an example of what you can choose from when deciding which museum to tick off your list first, but know that you are strongly advised to start with one of the best museums the world has to offer, a Goliath (if he were a gentleman and a scholar) of the art world, the State Hermitage. When in Rome, you do as the Romans do, and when in St. Petersburg, you visit the Hermitage. It’s that much of a non-negotiable.

Sprawling through the five majestic buildings along the Neva river embankment (plus a couple of extras and a suburbanite but huge depository in the Staraya Derevnya district), the Hermitage houses over three million artworks by names big and small of the bygone era and the present day alike. And just to hammer it home how big this museum’s collection really is, think about this: if you were to spend a minute in front of each item, it would take you more than seven years to see them all. Art is long, life is short, eh?

Such a rich seam of art is a fruit of the collector’s effort by the Russian monarchs and aristocracy. The story began with the hoarding zeal of Peter the Great, who was partial to snatching an odd artefact here and there, but it was Catherine the Great, a self-proclaimed patroness of arts, who really set the Hermitage ball rolling with an acquisition of a considerable and star-studded collection of Renaissance paintings. Things continued to amass when Nicholas I opened the collection for the (blue-blooded) public’s viewing pleasure in 1852, and after the 1917 revolution the Hermitage finally became a state museum with free access for all. It had its drawbacks, though; the Bolsheviks were no strangers to selling a Raphael or two for the various (justified and not so much) state-building needs. Fortunately, the Hermitage’s treasures stayed intact for the most part, largely thanks to the tooth-and-nail efforts of Joseph Orbeli, who was the museum’s keeper at the time of the devastating 1929-1934 artwork sale.

But enough with history, let’s go to the tips part. Here’s how you go into the Hermitage and come out alive and enlightened!

If you’re taking a stroll down Nevsky Prospect and decide to hop in the Hermitage on a whim, know that this isn’t your best idea of the day. The first aspect to consider here is that the museum is closed on Mondays (even the Hermitage doesn’t like Mondays), as well as on January 1 and May 9, and there is, of course, the opening hours you need to factor in.

Then there is a problem of these disheartening ticket queues that sometimes stretch all the way to Palace Square. But listen closely; there are some tricks that may help you bypass that. The general rule of thumb is to come after 3 or 4 pm, if you’re banking on a short visit, that is (FYI: in the Hermitage argot, ‘short’ means two (at the very minimum) to four (a comfortable middle ground) hours on average), and to buy a ticket at a ticket machine located outside of and in the museum, or even online if you could really do without people invading your personal space for an hour of lining. Online passes come at $17.95 for a one-day and $23.95 for a two-day pass (spot the one with a good value for money), in comparison to the usual tickets that start at 300 rubles. Everyone has free admission on the first Thursday of each month and on December 7 (the Hermitage Day), and tickets are always free for students (you lucky buggers, NB: don’t forget your student ID as it will be that and not your beaming young face that will prove your fee-free status) and some other categories of people.

As we all like a bit of a bargain, the museum will be more crowded on the free-entrance days, as well as on weekends and national holidays. It’s always more crowded in the high season, but the shortcut here is that these organized tourist packs that fill the museum come summer are usually bound to their lunch at midday, and so flock to the venue before or after that. You can outfox them by coming 20 minutes before the admission starts, or, as noted previously, a couple of hours after the clock strikes twelve.

Take care of the practicalities

The most obvious piece of advice, but always the most overlooked: wear comfortable clothes and shoes (crucial!), and don’t come in on an empty stomach; museum-going plus hangry equals torture. The Hermitage has its own little café to keep you going should you feel peckish in the process, so hooray for that. The choice and prices aren’t great though, so maybe pack a snack if you have some dietary eccentricities (here’s how you eat through St. Pete if you’re vegan, for example).

Understand why you’re going to the museum, and what you want to get from it

Is it just because you want to check this box out of a standard touristic itinerary? It’s a completely normal reasoning, but if that’s the case, the Hermitage with all its centuries-old richesses is likely to soon tire you out. Trying to hasten through all the halls taking cursory glances at the picture-laden walls can leave you feeling over-saturated on all the art you’re bombarded with, and that’s never good. What I’d recommend here instead is, pick a few seminal works you’d like to see beforehand and make a beeline for those. The Hermitage even has a nifty online trip planner to help you prevent all the umming and ahhing on the day of your visit. You could also do it there and then by picking a free venue map at the entrance. The smotritels (i.e., the elderly ladies sitting in the corners) can help you find your must-sees should you get lost, so don’t worry. You can also try and chat with them to find out their recommendations for different artworks to see, who knows, they may even speak English.

Another strategy could be taking in the interiors and approaching your visit as a sort of quest. Take a slovenly walk through the landmark museum, trying to see it as a historic building where Russia’s most fateful decisions were made. Peek out of the panoramic windows looking into the roomy Palace Square, explore every nook and cranny of the place, and imagine what it would have been to like actually live here, through the ages. And don’t mind the aforementioned smotritel babushkas watching you from their cornerns, I know it can feel a bit creepy. Just keep calm and carry on.

Is it a comprehensive art experience that you’re after? Also take heed that you can’t just go through the Hermitage in one attempt and still stay sane and interested in art, however enthusiastic you were in the beginning. Focus on one period, art form or artist, and take your sweet time exploring it, but in a mindful way. Look for the next tip for explanations.

Don’t just stare at the picture trying to appear all important and intellectual. Analyze it. Form your own opinion. Ask yourself, what do you like, or dislike, in the overall composition? Is it harmonious? Does something stand out? What do the colors say? What effect does it have on you? Look for emotions in portraits, life in still-lifes, and the artist’s careful brushstroke in every detail.

Observe costumes, poses, pets, objects, surroundings; there’s honestly so much for you to notice, and to understand. Even the most effete drawing of a society grande dame in a powdered wig and pompous dress with a forced expression on her face, or an uber-academic depiction of a battle scene with groomed horses and stone-faced soldiers channelling eerie patriotism have something to say.

Why is it that every society panjandrum felt it was so important to have their likeness taken? Why was it considered mauvais ton when a battle scene didn’t depict the warriors in a particular way? Mull it over, and it will pay off in an increased attention to subtle minutiae, an enhanced artistic sense, and most importantly, an exciting feeling that you're having a tête-a-tête with the best masters of all time. (I wouldn’t recommend this strategy if you’re looking at Bosch, though, I think that here one look is enough. Each to their own, but my inkling is that it will save you some nightmares).

If your intention is to study a particular period or artist, know that even the most haphazard museum display has some thought that went into its composition. Showcasing is a science in itself, and it’s aimed at helping you form a comprehensive understanding of the hall’s main topic. Be conscious of that. And it’s always a good idea to do some reading beforehand; even a short Wikipedia entry can make you look at the artist, or their era, or their picture, in a much more informed way. It’s better to resort to theoretical treatises for some in-depth explanations, though, and the art critic bickering for some fun. There are lots of art holy wars out there you can chuckle about on a long wintry evening. Just saying!

Have a good trip!