Nizhny Novgorod: The Capital of Sunsets

Street art, highlands, and foods not to forget – discover a majestic city at the confluence of the Volga and Oka rivers. 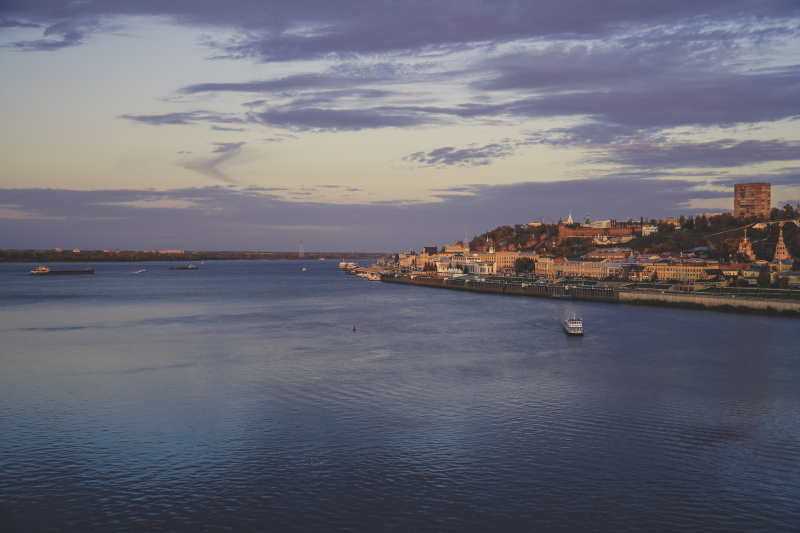 Nizhny Novgorod (not to be mistaken with Veliky Novgorod!) is the capital of the Volga region. Founded in 1221, the city made it into history books multiple times as a prominent trade center and a hub of liberty: in the 15th century, local citizens led by Kuzma Minin and Dmitry Pozharsky organized an army to set Moscow free from the Poles. In Soviet times the city was renamed Gorky, in honor of the writer Maxim Gorky who was born here, and later became a “closed city” due to its number of strategic defense facilities. It was only in 1990 that it got the original name back and became open to visitors once again.

Today Nizhny Novgorod, also known shortly as Nizhny or NiNo, is a million-plus city that combines the spirit of merchant Russia and the rhythms of a prosperous metropolis.

Located about 1,000 km away from St. Petersburg, Nizhny Novgorod is easily reached by a two-hour flight. But since I wanted to play it safe (and cheap, mostly) I ventured out to start the journey on the train from the Moskovsky railway station instead. I have to admit that 13 hours on the upper shelf near the lavatory of an open sleeping compartment didn’t sound exciting in any way, but it turned out I’d actually bought a ticket for a premium-class train equipped with automated doors, air conditioning, and even shower facilities. It certainly was a first in all my years of railway trips.

If your routine isn’t 10,000 steps a day, discovering Nizhny may become an adventure with cracking knees. If you’re ready to give it a try, make sure you’ve got your most comfortable shoes on, since the city, especially the part on the right shore of Oka, is located on the highland, making you climb up and up for historical centerpieces. Starting from the very top, every tourist heads to the heart of the city, the majestic red-brick Kremlin of the 15th century. Its interior causes mixed feelings: the ancient walls now guard only edifices left by the Soviet era except for the 13th century Archangel Cathedral. Nevertheless, the fortress is very neat and lovely, with an observation deck that's perfect for catching sunsets. Watching the sun sink over the endless horizon shaped by rivers reminds you that climbing that high wasn’t for naught.

On your way down the hill, you can’t avoid the Chkalov Stairs. The longest staircase in Russia, it was built in the 1940s in the shape of the number eight and features 560 steps on both sides. As my friend said, a great place to make cards for March 8. Starting from the monument to Valery Chkalov, a prominent Soviet ace pilot, they bring you to Nizhnevolzhskaya (lower Volga) Embankment for another chance to feast your eyes on the water.

Parallel to the embankment, away from the river, Rozhdestvenskaya Street is a place not to miss. Jam-packed with eateries and bars, it’s, first of all, a magnificent example of urban architecture of the 18th and 19th centuries kept completely intact. The gem of the street is the Church of the Nativity, one of the best examples of the Stroganov style.

The city center is lovely even for aimless strolls: here, the wooden quarters coexist with modern street art, and for every crowded street, there's a quaint lane. The most gentle way to get a proof of it is by taking the local tram route No. 2. It goes around all of the city's main sights, so the views will constantly excite you. Secondly, there’s a high chance to take a retro tram – it costs just 10 rubles more, but the ride is accompanied by stories and notes about locations you pass by – and all of it in a cozy old-fashioned interior!

Frankly speaking, our key gastronomic goal for Nizhny was to sneak into a McDonald’s (there’s a rumor that they are still operating in smaller cities). Spoiler alert: our hopes were ill-fated, so we ventured out to local eateries, and, as a result, forgot all about the fast-food chain.

I must admit I didn't have high hopes for the city: we came here to walk in the footsteps of the characters from Alexey Balabanov’s Dead Man's Bluff and tick one more item off our “Exploring Russia” list. But what we discovered will definitely bring me there one more time – the most stunning sunsets, the coziest courtyards, and the most amiable strangers: from bartenders to taxi drivers who brought a feeling of home to the new city.