Comfort food is never about the calories. And almost never about the money. It might be about the simple science of sugar and fat coming together to trigger the hormones of happiness. But we like to believe that it’s about reconnecting to our younger selves and our cultural identity in general. Could the key to the mysterious Russian soul be found in a... pyshka? 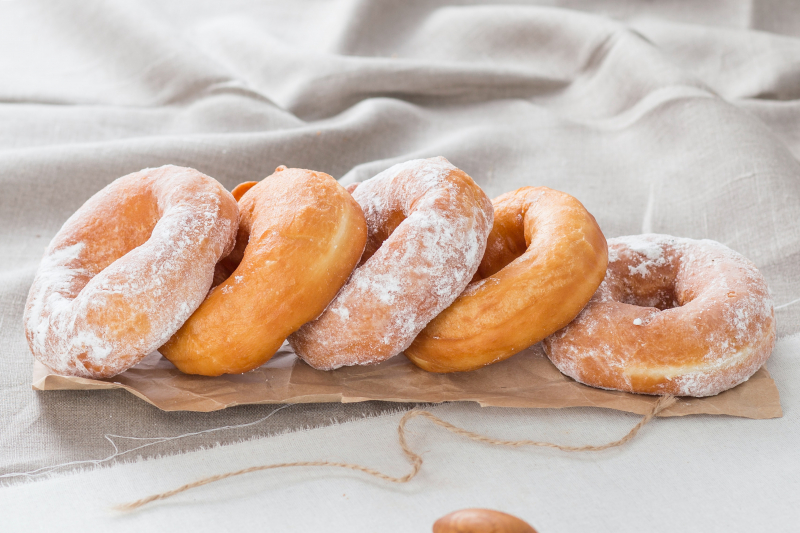 We get it – a healthy lifestyle is a good thing. We, too, try to switch out simple carbs for arugula every chance we get (and even surveyed some of the best vegetarian and vegan restaurants, shops, and cafés in St. Petersburg). Yet sometimes it’s just one of those days when you just have to turn to the magic of the familiar, which in our case is often crispy, hot and greasy. You, too, can have a favorite Russian fix.

Are you in the mood for:

A doughnut? It’s a matter of debate. A taste of childhood? For sure. These fried dough circles are lighter and crispier than their Western counterparts and are always sprinkled with powdered sugar instead of a variety of glazes. And you can’t have just one.

In St. Petersburg, the most famous pyshki joint is the Pyshechnaya on Konyushennaya (Konyushennaya St. 25) Established in 1958, it has not only kept the original recipe but also, it seems, the original decor and the overall Soviet vibe.

Most people order about five or six pyshki and eat them while they’re hot, dusting their overcoats with powdered sugar and licking their fingers. The beverage of choice here is a brownish-white liquid with “coffee” in its name. Don’t try to ask for a latte. Credit cards are not accepted.

If pyshki are a somewhat lighthearted treat, chebureki are certainly a step up in commitment. Half-crescents that take up a frying pan, they’re known for their crispy dough and the hot goodness of beef and onions filling with juices running down your chin. The secret ingredient here is vodka – not as a chaser but as a leavener that gives the dough its signature crispy bubbles.

One of our favorite places to bite into one of these is the cheburek chain Brynza. The menu here ranges from a classic version made with brynza and gouda cheeses, to options with various types of meats, mushrooms and even a “Chinese” cheburek with sweet-and-sour sauce. The dessert version with apples and raisins is a bit of stretch but hey, maybe it’s just us carnivores speaking.

Pelmeni (Russian meat dumplings) were once deemed the ideal student food: they are quick and easy to cook, hearty, and have an almost infinite shelf life in the freezer. Still, stuffing yourself with cold leftover pelmeni while cramming for tomorrow’s test is one thing; having the very same dish at a pelmennaya is a completely different story.

On the whole, there are two kinds of pelmennayas in St. Petersburg. The new fancier places offer a wide choice of fillings, sauces and even ways of serving this delicious dish; a good example is the Pelmenya franchise where you can try not just the traditional pelmeni but also their closest cousins from other countries: Turkish manti, Japanese gyoza, Georgian khinkali and so on. Another good thing is that you can find these joints not far from most of ITMO’s buildings.

A Soviet-style pelmennaya, on the other hand, is a trip back in time. Often located in some dim, poorly lit cellar, these places seldom offer any choice but the classical serving of several pelmeni in a small pot with some sour cream atop, but the one-of-a-kind atmosphere makes eating them more of a spiritual than a gastronomic experience.

Arguably the most popular street food in a considerable part of Russia, shaverma (shawarma) is relatively new to St. Petersburg. It has been making its way towards unprecedented popularity for the past couple of decades, having survived the suspiciousness of traditionalists and even some negative campaigning by the media. So, what makes it so good?

In essence, a classic shaverma consists of slices of roasted chicken mixed with veggies (cucumber and tomato) and a cream-ketchup sauce, rolled in a lavash (a soft thin unleavened flatbread). This makes it possible to eat your shaverma on the go. What’s more, it’s a warm dish that seems to contain all elements of a good meal: meat, greens, and bread. Some people even joke about shawerma being perfectly healthy (which it is totally not).

Still, that doesn’t explain why shaverma became so popular. One explanation to that may be its unique feature: every cook makes it in a slightly different way. For some, trying different recipes has become some sort of a gastronomic hobby, which eventually led to the emergence of full-fledged shaverma festivals.

Shaverma has become such a cultural phenomenon that the correct pronunciation of its name sparks battles between cities. In Moscow, you'll find it under "shawurma". But in St. Petersburg, it's "shaverma" forever.