This summer, another season came to a close at ITMO Accelerator. At the final Demo Day, the first place went to EasyTry – a startup working on a virtual dressing room for online stores. Thanks to a new algorithm and a proprietary computer vision technology, the team’s app can grab clothes from one photo and transfer them to another. The algorithm doesn’t require any pre-made 3D models or multi-angled photos of the product. We spoke to Daniil Andreev, founder and CEO of EasyTry, about the project’s origins and how the developers overcame challenges to become breakout stars on the market. 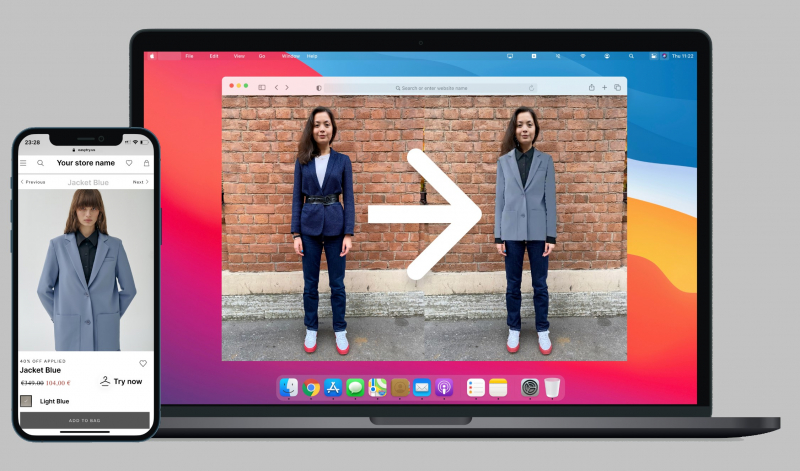 What is it that makes your technology special?

We’ve designed an algorithm that can transfer certain data from one picture of a person wearing clothes (such as a model in a catalogue) onto the user’s own photos. What’s more, it automatically adapts the original picture to fit the user’s personal parameters. So you don’t even need to say what your measurements are – the app determines that based on the photo and applies the clothes onto your image while keeping all the proportions intact. The result is extremely realistic.

So just an image of some piece of clothing over white background won’t do? After all, not all manufacturers and retailers probably have the ability to provide an actual lookbook.

That’s true, not all the brands have images of models wearing their clothes. But we’re working with a specific market segment: premium mass market and luxury brands. These companies tend to have model shots – and that’s what we need. This way, we can add items to our virtual dressing rooms without any complications. That’s our advantage.

90% of our competitors require a 3D model of each item or enough pictures taken from different angles to allow one to be made. That, obviously, is expensive and time-consuming. Processing a single product line can take months. Our solution severely reduces expenses and makes this kind of feature available to brands that couldn’t afford it before.

But there are still some limitations, aren’t there?

We have some criteria for product photos: models must fully face the camera. A completely frontal shot is ideal because we need to see the person in full height to scan the clothes correctly. But there is an acceptable angle of deviation – it’s about 10-15% from the “perfect” angle.

Right now, we’re working on making these limitations more lax. In the future, we’d like to make it possible for models to even be at a 45-degree angle from the camera. It’s certainly doable, but we just don’t see it as a pressing task for now – after all, any studio photoshoot will have frontal shots of the models.

There are some requirements user-side, too: we can’t use photos of them at half-turn or in twisted poses. That, too, is a focus of our current R&D.

Origins and the team

How did you come up with the idea for the project?

The project originated last year at a hackathon. Our team came together by accident and we matched each other quite well. We won the hackathon and decided to reunite on a more tangible project. At the time, we were into deep fakes, but that soon grew stale. We decided to pivot towards digital clothing – back then, it was a rapidly-growing trend that received a lot of attention in the media.

After we did our market study, spoke with potential clients, and tested a few prototypes with our friends’ online stores, we realized that there was potential in this idea. That’s when we started putting a team together.

We were lucky to have personal connections with people at Skoltech who were involved in computer vision, deep learning, and related research. They became interested in the project and the opportunity it offered to be the first to solve challenges related to transferring clothing from one image to another. That’s how we acquired a CTO and a number of scientific advisors. Today, there are nine people on the team working on R&D while two advisors from Skoltech curate the project.

Your product’s current version – is it just a demo or a fully working tool?

What we have right now is a working beta that’s being piloted by several retailers on the Russian market. But we continue to work on the project. We’ve received a lot of feedback from brands in Russia and Europe. In the near future, we’ll be making our debut on the US market.

Among our clients are two very major and well-known Russian brands as well as several mid-size brands that are popular in their market segments, but not very well-known internationally.

Are you only focusing on western markets, then? Why not, for example, China? After all, it is the largest segment of the online retail market.

We’ve actually been able to chat with a few major Chinese companies – startups as well as well-known brands. They’ve provided us with a lot of feedback from which we’ve gathered that we are not yet ready to enter the Chinese market.

China has a very specific e-commerce market which is split between several major players and is largely dependent on the Aliexpress and Alibaba platforms. Therefore, we’d need to collaborate with them – and there’s no guarantee that’ll happen. Besides, the period between initial talks and final agreement is very lengthy there. So we decided to go with the US, where the business processes are more accessible.

Do you not have any competitors in the US?

Yes, there are already some startups there working on similar software. For instance, there’s a project that uses a similar algorithm; but they still use 3D models, so it still takes them 20 to 30 days to process a single clothing collection. They’ve already raised some investments and have been developing their business for several years, but they lack our ease of integration. There’s a similar startup in France, but their algorithm lets users only try on clothing for the upper half of the body, not the whole look. Those are serious drawbacks, and we have the opportunity to remedy them.

Tell us a bit about your time at ITMO Accelerator. How did you hear about it? What made you decide to join?

I had friends who’d already participated in ITMO’s acceleration programs or worked with the mentors involved. They took me to see project presentations by applicants for the Pre-Accelerator.

Even though we only had a concept, some vague development plans, and no MVP, we still decided to apply for the Pre-Accelerator. We thought that it was very important to be in an environment where there are other startups and mentors; that it’d help us move forward and avoid mistakes.

The Pre-Accelerator left us with nothing but positive impressions and we decided to stay in that community. Honestly, we just really loved working with Kirill Kovalev, who is an excellent mentor.

What did you gain as participants of the acceleration program?

First of all, we enjoyed support from others who, just like us, were struggling with growing pains, entering the market, and producing prototypes. Just by being a part of that community we received a great deal of support, advice, and suggestions. Kirill helped us formalize our tasks and goals and make them realistic and achievable. He also gave us the opportunity to chat with his acquaintances in the industry, who shared their experience and gave us advice.

Did you expect to win at Demo Day?

We actually didn’t consider our project to be a particular stand-out. We probably do have an interesting case and an interesting technology. But there are loads of great people at the Accelerator, so we didn’t know who would win until the last minute.

Winning wasn’t a goal for us. It was a pleasant bonus that boosted our confidence, too. What’s very important is knowing that the mentors and experts believe in us, our team, our product, and its potential.