Floating Along the Volga on "Foresight-Fleet"-2016

At the end of last week, 19 May, the fifth project-oriented cruise on the Volga "Foresight-Fleet", which brought together over 700 experts in various fields including businessmen, officials, scientists, and representatives of the education sector, journalists and developers. The event was organized by the Agency for Strategic Initiatives and Russian venture company, and as in previous years, the thoughts of all the participants were focused on the National Technology Initiative (NTI). ITMO University was represented at the massive "brainstorm" of the year by a delegation of twelve individuals, distributed between the four ships – "Business", "Government", "Society" and "World." 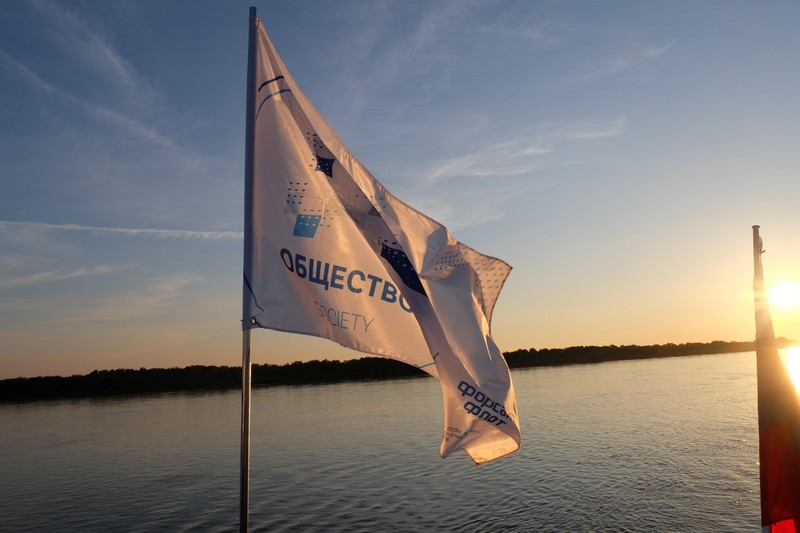 Last year, the focus of the experts shaping the market for the National Technology Initiative was to glance into the future and understand which industries would enable Russia to be in a leading position in global economy by 2035. However, this year in 2016, the attention of specialists was focused on specific tasks like updating the NTI matrix, management of NTI, analysing the current “road maps”, discussing the participation of various groups in the implementation of NTI and so on.

This year’s foresight – a methodology for long term planning into the future – was aimed primarily at forming an implementation strategy for the National Technology Initiative, which will be submitted to the President of the Russian Federation Vladimir Putin in July this year. All the experts were divided into four ships. The “Business” ship brought together experts who discussed tactics for entering new markets, choosing technologies on which to bet in the future and solving other relevant issues. On this ship, ITMO University was represented by Ekaterina Egoshina, Head of Marketing Department, Alexander Ostroukhov, Head of SIE Cooperation Office and Alexander Atrashenko, Research Engineer in the Department of Nanophotonics and Metamaterials.

"I worked in the VCNet group, looking at venture investments and other ways of making resources available for the development of future businesses. The group included representatives from leading Russian investment funds, as well as colleagues from RVC and Skolkovo. The fact that I was the only representative from the developers side offered extra perks at “Foresight Fleet”: I learned about the work of investors from inside and was able to better study the venture capital market in Russia. I am certain that this knowledge will help me to promote start-ups at ITMO University." – explained Ekaterina Egoshina.

As noted by many participants of "Foresight-Fleet"-2016 the main change compared to last year is that on this cruise, particular attention was given to education. Moreover, according to the program director for the “Business” ship, Boris Ryabov, this topic wasn’t prescribed but it actually came mostly from those experts participating. Actually, the main issues related to preparing qualified workers, nurturing the next generation, for whom the new NTI market will be their reality and not their future, was apparent in the work of many of the groups. But the most concentrated "brainstorm" on these issues occurred in the ship, “Government”- “Talents” and “NTI Universities.”

“Working in the “Talents” groups, together with the Dean of Technological Management and Innovations at ITMO University, Philip Kazin, we analysed the systems around search, recruitment, and development  of talents, which are at the heart of NTI University and the National Technology Initiative as a whole. Our university relies on talented applicants, students, scientists, teachers, shaping an environment for development. This is our strategic priority, on which we have worked and will continue to work on our return from "Foresight-Fleet" by launching a series of new projects together with colleagues from the Ministry of Education and Science, Moscow Polytechnic University (MAMI), Open University Skolkovo, ASI, Peter the Great St. Petersburg Polytechnic University, Financial University, Tomsk State University and other partners,” explained Head of Department of Strategic Development, Marianna Chistyakova.

By the time they landed in Astrakhan, the participants of the "Talents" group had formed a number of key areas that they will continue to develop until the end of the "Foresight Fleet". Some ideas related to recruiting and development of talents that they came up with were: forming clubs, and NTI Olympiads, children's technoparks, design schools and new educational centers. They also discussed the introduction of an intellectual portfolio, with a skills and talents registery, and the development of a system aimed at discovering gifted children. "At the heart of the National Technology Initiative is the need for tectonic changes in state management structures in Russia – from industries to markets, from science to technology, from institutions to services and from personnel to talent. Behind these simple words lies the incredible complexity of the challenge facing Russia moving towards 2035: either to become one of the leaders in development, or to disappear from the world map. Accordingly, our discussions on “Foresight Fleet” were not only about technology itself, but also about social, psychological, economic, political, and organizational processes in our country, which can either slow down or speed up the movement of the country forward. In fact, FF-2016 has occurred by the lighting of the intellectual torch, the fire which will spread across the country through the “fleet” participants. All the cruise participants now face the challenge of conveying the spirit, atmosphere and content of this event to their colleagues, so that the quality of their activities corresponds to one of the main goals of NTI – providing new conditions of development and growth, so that by 2035, they can provide a technological breakthrough in Russia,” shares Philip Kazin.

Mr. Kazin further noted that it is critical to implement structural changes in the future at ITMO University so that the students of the University and its applicants knew exactly that they go to a university which thinks globally and is thinking about the technological revival of Russia in the long term. This is how one can describe the aspirations of NTI University, a network of universities of a new format, within the National Technology Initiative paradigm for the development of Russia.

"It was important for me establish two things: the difference between the position of the experts this year from the previous year, since in 2015, we discussed the topic of universities on “Foresight Fleet", and how representatives of Federal Executive authorities respond to frequent radical proposals from participants. The results make us think of the immediate next steps for the transformation of our university. First, part of the proposed changes are already in one form or another embedded in the work at ITMO University. Secondly, there are a number of projects that we can implement and are of benefit to everyone. Thirdly, I got a clear message from representatives of Federal Executive authorities that they have put their hopes in ITMO University success. We, of course, are not NTI University, but we have a chance to become them over time. Now we must act." – explained Oleg Malsagov, Adviser to the Rector for Development. The vision of NTI University on the "Government" ship was represented by the Head of Project Management and Innovation Department, Nina Yanykina and Oleg Malsagov.

"NTI University has become a recurring theme for discussion at FF2016. Speaking about how to transform Russian universities to be able to meet the objectives of NTI, we identified first the importance of competition and cooperation with leading international universities and the involvement of Russian universities in the global scientific and technological agenda. Without this, the breakthroughs and the achievement of our objectives will be impossible. A perfect illustration of the need for global competition was predicted for 2035 event, tentatively identified as “ITMO goes for IPO”. Given the fact that it happened without the active participation of representatives of the University in the process of generating ideas, I believe this is a bid for victory for us as an entrepreneurial university" – sure Nina Yanykina.

The theme of education and the role of universities in the implementation of NTI was explored on all of the ships, confirms a member of the “Society” ship, Maxim Ivanov, student from the Department of Technological Management and Innovations at ITMO University. While discussing the social environment of NTI in the working group, experts shifted the focus of their attention from what society expects from education and from the National Technological Initiatives in general to what are the requirements to promote it in the future. Experts came to the conclusion that no single university is able to produce highly qualified personnel for the NTI.

"An important feature of a future specialist is having a wide range of competences which does not, however, exclude knowledge of a specific speciality. A student of the third decade of the 21st century might, for example, learn foundational things at MIPT, while in parallel, pass a MOOC to obtain "non-unique" knowledge, then will take an internship for a few months in two or three companies, and then will study Economics at HSE and Photonics at ITMO University, while attending extra Chinese language courses. Then thean internshipeate the  knowledge of a specific specialityabout the technological revival of Russia in the long term.ec next year he will be able to go to Beijing to study microelectronics in a super laboratory, and then return to St. Petersburg at ITMO University, take a course on technological entrepreneurship, and within a year establish an SIE and receive investments," describes the mixed education model of the future Maxim Ivanov.

According to the Head of Project Management and Innovation Department, each team at ITMO University plans at the end of “Foresight Fleet” to participate in R & D and implementation of NTI Strategies in all areas that are a priority for the University: "Talents", "Universities", "Business Services", "Intellectual Property", "Venture Capital", "Science", "BRICS countries" and others. The fourth ship, drifting along the Volga, was called "World". On this ship were international experts, focused on global technological trends and are conscious of the challenges in preparing Russia for a new “technological way of life”. Here ITMO University was represented by Natalia Lukovnikova, Director of the Center for Scientific and Technological Foresight, Kirill Razgulyaev, Leading analyst of the Center, and Sergei Khmelevsky, managing partner of ITMO Venture Partnership.