Last Friday, the combined Chemical-Biological Center started working at ITMO University. Rector Vladimir Vasilyev and Professor David Avnir, co-head of the SCAMT International Laboratory participated in the ribbon-cutting ceremony. During the event, Vladimir and Alexandr Vinogradovs made a tour of the new center on Lomonosova str., 9. 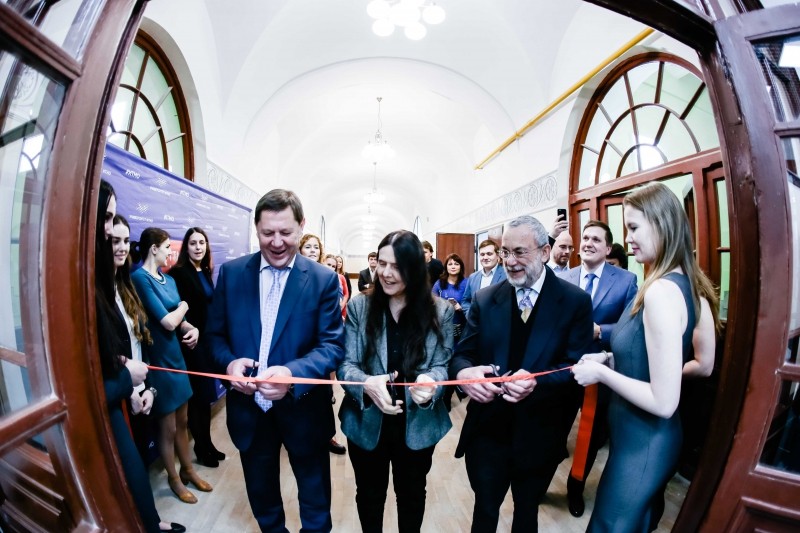 The new center is comprised of a network of world-class laboratories, the Department of Chemistry and Molecular Biology and the Research and Educational Center (REC) of Chemistry and Biotechnology. Bachelor's students will receive advanced training at the REC, while the Department is aimed at Master's and Research Students — up to 150 students are expected to enroll next year. The estimated maximum number of students for this Department is three hundred- the center's Board expects to teach such an amount in three years. "New foreign team leaders come to work here — in fact, we develop individual programs for them. They'll work here for about four months a year. Next autumn, Ekaterina Skorb from Harvard will take charge of one of our laboratories, and Evgeniy Pidko, a participant of the ITMO Fellowship program, has already become an academic supervisor for some of our students. We won't have any postdoctoral research fellows — only Master's and Research students and the team leaders; by the way, amongst the latter there are several of our graduates, who may well become heads of two of the laboratories. We are going to further develop this system", shares Vladimir Vinogradov.

The curricula of the new Department of Chemistry and Molecular Biology are based on the relevant trends. The research,as well as publications in top-rated science journals will be done as part of the SCAMT Laboratory's projects; what's more, the center will widely use the opportunities for international academic exchange presented by the Erasmus+ program. As of now, exchange programs with the University of Leipzig have already been elaborated; in December, an agreement with the Trinity College is to be decided on. What's more, by the end of 2016, ITMO University will apply for opening four more academic exchange programs. The Board of the Center believes that Master's students are to participate in internship programs for at least one month a year. As of now, the Center also works on two research programs in English. Vladimir Vinogradov believes that studying English is of essence to future scientists, as it has become the language of international science. In future, all of the programs are to be in English.

The Molecular Biosensing and Biorobotics program is focused on molecular robotics — this field is now widely discussed, as the last Nobel Prize in Chemistry was for the design and synthesis of molecular machines. The SCAMT Laboratory is planning to apply for a Russian Science Foundation grant, so as to create a system of microscopic viruses that could be injected into blood flow to treat viruses. As of now, its team creates the prototype for treating Zika virus. The other program is Fabrication for Green Chemistry and Advanced Materials, and is aimed at foreign students. Vladimir Vinogradov is sure of its success.Choosing between this know-how from ITMO and similar western programs will become a serious issue for future Master's students: the quality of education will be similar, but the costs are far better at ITMO. "As of now, all technological projects, be it petroleum industry or recycling, have to be as "green" as possible. For example, we now print millions of tons of documents and images in color, using toxic and carcinogenic paints. It has become so widespread and casual that we don't even notice it. Yet, all we have to just develop nanofabrication further — and we won't need hazardous pigments anymore. And this is only one of the ways to use nanofabrication for "green" chemistry and advanced materials", underlined Vladimir Vinogradov.