​From July 25 to 30th, RoboCup-2017 finals were held in Nagoya, Japan. This year, for the first time in the university's history, two teams from ITMO took part in the final stage of the famous tournament. Despite being newcomers, ITMO University's School Team earned its first award - the Novice Award in the On Stage category of the RoboCup Junior league. Team members and their trainers spoke to us about how they prepared for the international contest and what difficulties awaited them at the tournament. 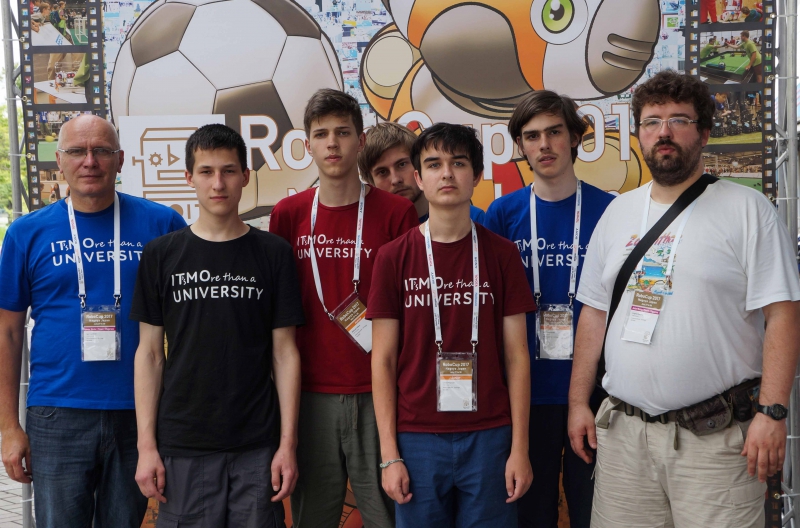 The team presented an autonomous manipulator robot Hello,Work. The machine's main feature is that it can operate in any surroundings given it has the map of the territory. The robot's main task is to move across an area with obstacles and move different objects. It uses the SLAM (Simultaneous Localization And Mapping) algorithm system to define obstacles, and recognizes the object it has to move with machine vision.

To solve the tournament's tasks, the team used the YouBot mobile platform with a manipulator by KUKA (a german industrial robots manufacturer). During the preparation stage, the robot was heavily modified: the team members replaced its hardware and fixed the robot with a camera, a lidar and other sensors. The arena for the tournament was an enclosure of about 60 square meters with walls, obstacles, tables with objects on them, a conveyor and other parts of a competition's testing area. The teams were given two days before the tournament to adjust their robots, which included mapping of the tournament arena, marking important objectives (i.e. start, finish, the locations of tables with objects, etc,), testing connection with the jury's computer and the like.

The robot's main task was to quickly and accurately move through the arena (the obstacles' location can be changed by the jury), and carry objects from one table to another. By using the SLAM (Simultaneous Localization And Mapping) algorithm system, the robot recognized the obstacles and objects it had to pick. For instance, if it had to take a particular item from one table and move it to another, the robot did the following: found the table the item was on, used technical vision to choose the item, loaded it as luggage, moved to another table and put the item there.

To pass the selection and enter the competition, the team had to prepare a presentation of their robot, including its technical characteristics and all the scientific nuances they've used in their project. They also had to launch a web-site with demonstration videos. "In essence, this tournament is about creating a simulation of a real production cycle. At a real production, there are parts that are to be moved from one place to another. The classical way to it is using a conveyor line. Yet, it has its own drawbacks, so now many people focus on developing alternative methods. One of them is using mobile robots that can solve the same tasks but in a goal-directed manner: the robot can be pointed to any part of the production line," explains Nikolai Dema.

During the tournament, the robot was to solve several tasks in six stages, each taking about 5-7 minutes long. After completion of every task, it got a new one.

All in all, nine teams competed in the RoboCup@Work category; most of them used the KUKA YouBot platform for their robots, yet, there were teams that made their robots from scratch.

"To my mind, this is one of the most difficult kinds of contests, as the tasks presented there are close to those of the real industry and, correspondingly, set the trends in this field. These tasks have much in common with what they do at Amazon's storage facilities. By the way, the Amazon Robotics Challenge is conducted in a similar manner and is also organized as part of the RoboCup. Our team is planning to focus on such contests in the future," shares Alexander Kapitonov. This was the first time ITMO's Student Team participated in RoboCup's international round. According to its members, the most difficult part was working on the many nuances of the contest's procedure that weren't announced in advance.  For instance, it was only at the tournament site that they've learned they had to sync their software with that of the jury. Another challenge was to adjust everything to work with the program that assigned tasks to each robot. This was most important, since if the robot misinterpreted the task, it wouldn't be able to handle it. The robots had only one attempt at each of the tasks, and if they failed at any, they couldn't advance to the next one.

Most of the teams that participate in RoboCup@work are research teams that focus on industry; in each team, there can be up to 20 members. Some of the participants were once among those who promoted such contests, and now take part in them as regular participants.

Another team that represented ITMO University was ITMO's School Team that won the Russian round of RoboCup, Russia Open-2017 which took place this May in Tomsk. Under the guidance of their trainers Igor Lositskiy and Evgeniy Zavarin, staff members of the Department of Computer Science and Control Systems, the team built and programmed a robot named Seldon who plays ukulele, sings songs and waves to its fans. Seldon won over the hearts of the RoboCup OnStage's jury, the category where robots had to be part of a stage play.

"For us, this was the first time we participated in this tournament on an international level, hence sometimes we felt that we lacked knowledge and experience in what had to do with nuances of this particular contest. We expected it to be similar to what we saw in Tomsk, yet in Japan there were several surprises waiting for us. For example, the stage where the robot was to make its act was a lot smaller than the one we used in the Russian round. So, we had to correct our performance, so that our robots won't get in each other's way," shares Igor Lositskiy. According to the team's trainers, the dancing and singing Seldon has undergone many changes and became more reliable. From the former Seldon who made such an impression on the expert jury in Tomsk, only the head remained. The robot's frame and mechanics were improved; the developers also fixed it with big speakers and a sound board which can translate sound onto external speakers. The system the robot uses for controlling its facial expressions changed as well. The previous one was based on a sound sensor - the robot "listened" to itself and his expression changed; now it relies on a system of LEDs and light sensors, which proved to be more reliable.

During his performance, Seldon was accompanied by three more robots and two members of the team. The Eyebot was in charge of communicating with Seldon, and the two lesser Darwin robots were backup dancers. ITMO's School team consists of five members: Levon Pogosov from the Saint Petersburg Lyceum 239, Andrei Lakomkin from School #139, Mikhail Volkov from School #495, Daniil Nechaev from the Saint Petersburg Lyceum 30 and Gleb Zagarskiy from Gymnasium #116; all of them were invited to take part in the RoboCup's round of the Asia-Pacific region that will take place in Thailand this December.