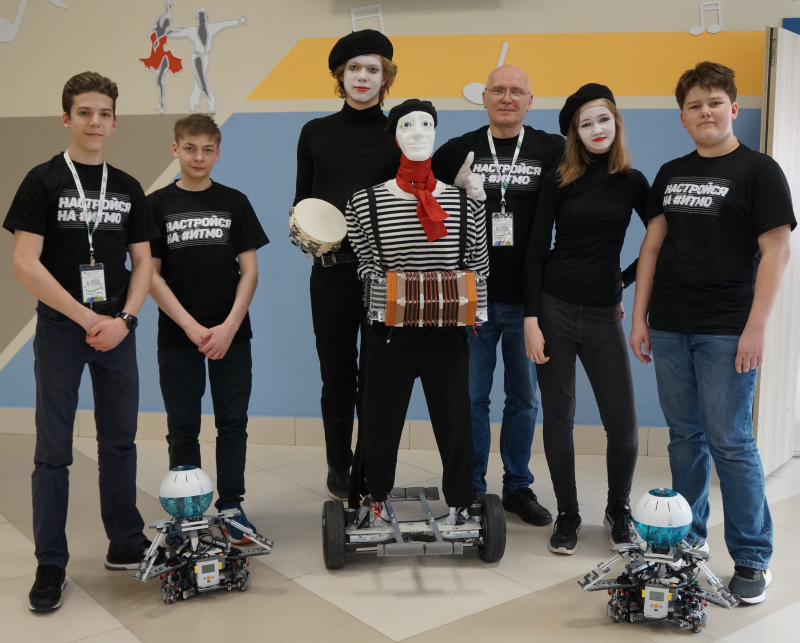 The national stage of the global RoboCup – RoboCup Open Russia competition in robotics that took place in Tomsk is now over. The team from  ITMO’s Youth Robotics Lab and Lyceum No. 239 presented in the RCJ OnStage Preliminary Secondary category. It’s one of 10 categories of the competition, as part of which the robots must perform: dance, sing, play musical instruments, and entertain the audience.

ITMO’s team consisted of Dmitry Yakovlev, Dmitry Kovalko, Elina Knyazeva, Nikita Luskin, and Valery Rybin, as well as their coach Igor Lositskiy. Robert Robotecky was the highlight of the competition.

Robert balanced on a hoverboard, played on the concertina, rotated his head, and blinked. He was supported by two Glazastik robots. The team members also joined the performers onstage: Dmitry Yakovlev and Elina Knyazeva supported them in the role of French mimes artists.

Robert Robotecky is the lab’s first hoverboard-based robot and probably one of the largest and heaviest self-balancing anthropomorphic DIY robots. By the time of the national stage of RoboCup, Robert was also taught how to move his eyes. Another addition – a smartphone with specially developed software was embedded into him. It allows Robert to follow hand movements and recognize gestures. With its help, he can be controlled and play concertino, rotate his hand, and look in different directions.

Glazastik robots look like huge eyes on a reverse delta platform that is placed on an omni platform so that it would be able to move.

The team has already won the St. Petersburg Open Robotics Competitions, and their following triumph at the RoboCup Russia Open was a logical next step.

“We had the opportunity to present twice. At the first performance, the robot played a beautiful melody based on the famous Under the Paris Skies song, at the second one – it played Blue Canary using its concertina,” says Igor Lositskiy,  the head of ITMO’s Youth Robotics Lab. “In the future, apart from participation in other competitions, we also plan to launch an ITMO Cybertheater. We have three musical robots now, including the famous ELSA and Seldon (Seldon, the winner of various awards, including the silver medal at the RoboCup Asia-Pacific 2017, plays the guitar, and ELSA, the second-place winner at RoboCup 2019, is a flute virtuoso).”

As of now, the team awaits the decision of the international organizing committee regarding quotas – they might be able to represent Russia at the global RoboCup 2021 finals.