Ig Nobel Prize And How It Contributes To Science

"Scientists have at last proved that cats are liquid!" - such ironic posts by cat lovers filled the Internet after the latest Ig Nobel prize awards. Surely, the Ig Nobel prize is often treated as a joke, yet it actually sets forth important questions, like what science is really about, and whom it should serve?  Which research is important and which not? Does science leave any place for creativity, and can research be treated as useless only because it makes us laugh? 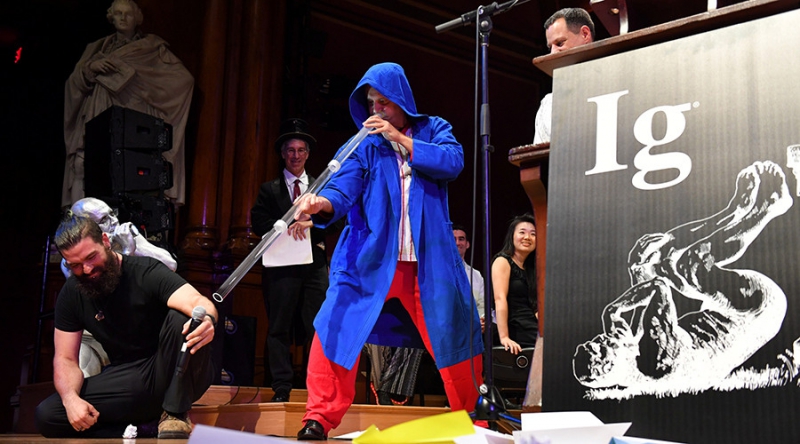 What is Ig Nobel about?

The Ig Nobel prize is awarded for achievements that first make people laugh, and then make them think - at least, that is what they say about it on the award's official website, never mentioning anything about these achievements being "scientific". The award is meant to emphasize an unusual and creative approach to research which contributes to the promotion of science, medicine, and technology amongst the general public.

So, the Ig Nobel prize is not a sneer at ridiculous research projects, but more of a self-depreciating celebration of curiosity and creative thinking. For instance, the most popular Ig Nobel award this year was in Physics, for proving that cats can be considered both liquid and solid: the prize winner, Marc-Antoine Fardin studied photographs of cats in different curious vessels using mathematical calculations and formulas. According to the researcher, there can be no doubt that cats can be considered liquid after one thinks what "liquid" really is - i.e. a compound that takes the form of the vessel. During his speech at the award ceremony, he admitted that there were Internet posts by cat lovers who joked about cats being liquid that made him interested in researching the subject. Laughable? Sure thing! Yet, Mr. Fardin underlined that this particular research was only an excuse to study a more important subject - the properties of liquids in general. Unfortunately, he didn't have the time to explain it in detail - Ig Nobel prize winners are given only one minute for their presentations, until a little girl interrupts them by crying  "Please stop: I'm bored". Yet, Fardin's work can prompt other, more serious research. For instance, veterenarian media already commented that his research makes one contemplate on the cat's peculiar physiological features - they can relax their muscles to the outermost, yet are among the world's fastest mammals. And thoough these peculiarities of felines are yet to be studied, the research can induce interest to them in those who like to appreciate the cats' gracefulness, yet never thought about it from a scientific point of view.

Why can't science be funny?

Really, why? Will that affect its significance? For example, this year a Swiss group of scientists got the Ig Nobel prize for finding a way to help treat snoring. The scientists found out that a didgeridoo - a traditional Australian instrument - can help do that. If a person plays it at least 25 minutes a day, he or she no longer suffers from snoring, and obstructive sleep apnoea. The authors associate the effect with the training of upper respiratory airways. During their presentations (which included a demonstration of playing the instrument), they stressed that they chose it as the subject of their research after a member of their team stopped snoring after he started to play the didgeridoo. Surely, this research didn't have much impact on medical science, yet it prompts us to contemplate on unusual approaches to science.

Ig Nobel Prize is not a sign of failure

Usually, the laureates perceive the Ig Nobel award with self-deprecating humor. For instance, the winners of this year's Economics prize, Matthew Rockloff and Nancy Greer who studied how contact with a live crocodile affects a person's willingness to gamble came to the ceremony in safari clothes and with plush crocodiles. Their study involved 103 subjects and showed that a human brain wrongly interprets the neural excitation from the contact with a dangerous reptile as excitation from luck in a gamble. Thus, the scientists used serious methods to study something laughable. Yet, maybe they'll one day become Nobel Prize winners, who knows? Getting a Ig Nobel prize doesn't mean that one is hopeless. In 2010, Andrei Geim and Konstantin Novoselov got the Nobel prize for inventing graphene; well, 10 years before that, Andrei Geim was known as a person who made a frog fly. In 2000, he and Sir Michael Berry of Bristol University got the Ig Nobel prize for using a magnet to make a frog levitate after publishing a corresponding paper in the European Journal of Physics. The Ig Nobel Award ceremony is, above all else, a show - and that is something one has to consider. Thus, almost anyone can be nominated for the prize, given they have a publication on the topic;  self-nomination is also ok. Each year, about nine thousand research teams are nominated for the Ig Nobel Prize. Traditionally, there are 10 prize categories, though they can change each year. The prize winners are awarded statuettes (their design is different every year), and a cash prize - one thousand Zimbabwean dollars (one trillion Zimbabwean dollars is less than 1 USD).

The award ceremony starts with a traditional Paper Airplane Deluge; the show itself includes jokes and musical performances. Some Nobel Prize winners also take part in the ceremony: they present their research in a fun format, first in just 24 seconds using scientific language and then in just 7 words that have to be comprehensible to just anyone. So, one can say that the Ig Nobel prize is conducted for the purpose of promoting science to the general public, as well as contemplating on such questions as the real significance of research and whether it really changes our lives for the better. The Anatomy prize went to James Heathcote, for his medical research study "Why Do Old Men Have Big Ears?". He found out that after one reaches 30, their ears grow 2 millimeter each year due to gravity.

The Biology prize was awarded to a team from Switzerland for their discovery of a female penis, and a male vagina, in a cave insect.

The Fluid Dynamics prize went to Jiwon Han from South Korea for finding the best way to carry a coffee cup so as to prevent coffee from spilling; the scientist warns that good as it is, the proposed method still increases the risk of falling over.

The winners of the Nutrition Prize were the first to report human blood being in the diet of the hairy-legged vampire bat, known to only feed from birds and cattle before. Scary.

A team of French and British scientists got the Medicine prize - they've used advanced brain-scanning technology to measure the extent to which some people are disgusted by cheese.

The Cognition prize went to researchers from Italy and Spain who demonstrated that many identical twins cannot tell themselves apart visually (on photos, for instance).