My Culinary Journey Through Russia

Whenever I'm back in Australia, one of the top five questions I get from friends and family are “what's the food like in Russia?” and “do you eat borscht all the time?” Usually, I grunt something like “there’s lots of potato and mayonnaise”, and “I love borscht!” Yet there's a lot more to Russian cuisine than my impromptu responses provide, so here’s a little overview of some tasty and odd traditional meals that are available in Russia. 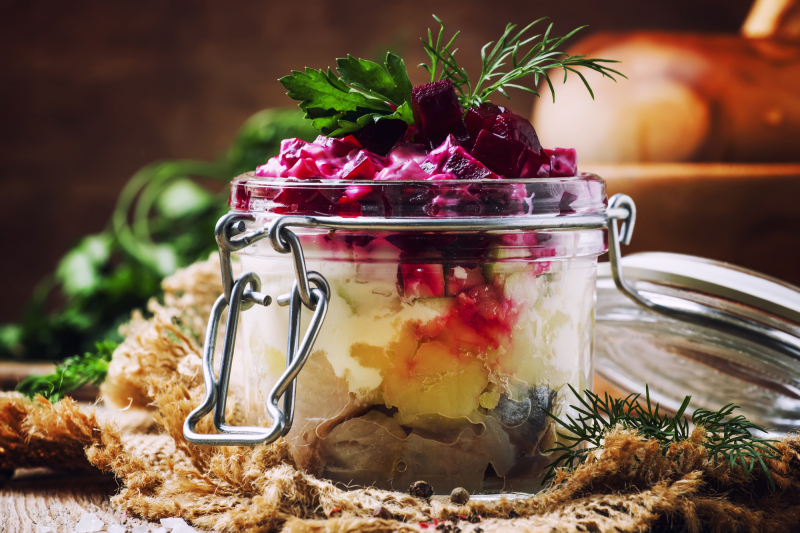 You can find this delicious salad in every cafe, restaurant or school cafeteria in Russia; but it’s also close to my heart because I grew up on Olivier salad in my little Persian household, completely unaware of the fact that it is a Russian (or French) dish. Whenever we had leftover roast chicken, it was “salad olivieh” time, and the only reason any Persian would have mayonnaise in their fridge would be for the specific purpose of making Olivier salad. In Russia, mayonnaise (or sour cream) is basically a staple for any salad or even soup. While the Olivier salad I knew and loved all my life was a lot more creamy, the Russian version is “chunkier”. All the ingredients - carrots, potatoes, eggs, pickles, and usually ham rather than chicken - are cut into identical cubes to match the size of the final ingredient: peas. The whole thing is decked out in mayonnaise and can simply be a meal in itself rather than a side because it’s so filling - but it’s almost always served as a side. Apparently the original salad was actually invented in the 19th Century in Moscow by a French or Belgian Chef, monsieur Olivier. Explains the name and the confusing origin.

Herring under a fur coat

This is a salad which, if you want to reduce it to something more familiar, it can be called the salad version of borscht or the beetroot Oliver salad or the salad with the little fishies (this is what I call it when I forget the name!). It’s basically got all the Russian favourites: beetroot, potatoes, carrots, as well as some onions and mayonnaise for consistency. Rather than chopped like in salad olivier, it’s all grated and placed in layers in a bowl. Pickled herring is placed on a plate, and the salad is turned over onto the herring to form a round dome, “the fur coat”. It’s often topped with grated boiled eggs and is a traditional dish for New Year along with the Olivier Salad. Besides the herring factor, which I’m still not used to, I think the salad is delicious!

I’ve never liked mushrooms - I always thought they were weird and chewy and gross, but I later discovered that the Portobello mushrooms i’d been eating all my life were literally one of 50 million types of mushrooms that exist in the world. Find a forest in Russia - any forest - and you will discover all kinds of different mushrooms, including the “magic ones” (which are illegal to pick!). My prejudice against mushrooms vanished after I went mushroom picking and tasted the delicious mushroom soup made from a mish-mash of all the mushrooms we managed to find. YUM! Just make sure you go mushroom picking with someone who knows what they’re doing otherwise you might get poisoning.

As I’ve been reminded a number of times, this is not a Russian dish, but it’s a national dish in nearby countries like Tajikistan and Uzbekistan. It’s a delicious rice dish with chopped carrots, pieces of meat, and sometimes sweet fruit like raisins, quince or dried apricots, and always topped off with full cloves of garlic. It’s very often doused in oil, but it’s so delicious and popular that you can find it in almost any cafeteria all over Russia.

Tvorog is an interesting white cheese that some people call cottage cheese or quark in English because that’s probably the only thing you could compare to tvorog in the west. But tvorog is much drier and is also a Russian staple. Mix it with smetana (Russian sour cream) and some sweet additions like jam or sugar, and you’ve got yourself a breakfast treat. Otherwise, throw in some flour and fry it and you’ve got yourself sirniki (little cheese patties), which are quite possibly the most delicious things ever - and extremely filling. Eat them with raspberry jam or sour cream and you’re on your way to being a real Russian. Tvorog can also be used to make delicious cakes, cheesecakes, cookies, and puddings. Google “vatrushka” and “zapekanka” to see what i mean.

As yet, I don’t see much difference between the traditional Russian blini and a French crepe, except for, maybe, the choice of fillings and the amount of oil used. Ask for Nutella with your blini at the Russian New Year markets and people will look at you in confusion (Nutella is super expensive in Russia and also not something people add to blini), but if you ask for chicken, minced meat, tvorog, smoked salmon, mushrooms, onions, sour cream, liver, or even caviar, at the local blini restaurant or pop-up stall, you’ll be served right away! There’s a Russian blini chain called Teremok where you can check out the menu of savoury and sweet “pancakes” available.  Blini is such an important aspect of Russian culture that there’s even an entire festival dedicated to it called “Maslenitsa” - usually in February or March.

These delicious little stuffed dumplings are known in some eastern european countries as “pierogi” and can be eaten by the dozen. Fill them up with potatoes, mushrooms, cabbage, tvorog or even cherries and you’ll have a nice entree or delicious dessert. Homemade is the best, but you can also find it around in different restaurants. It’s usually boiled or steamed and then brushed with butter for extra deliciousness.

Honey cake or “medovik” is a very popular Russian cake which has made its way across the world. It’s got about 8 layers of soft honey biscuit cooked over the stove top then baked. Between each layer is usually condensed milk making it a soft, sweet and scrumptious dessert!

This is among the weirdest foods I’ve encountered in Russia. Otherwise known as “meat jelly” or “aspic”, this strange substance is cooked for over seven hours. My friend served it to me once when I was visiting her home, and it was kind of like eating a meat soup only cold and with the consistency of jelly. The taste itself was quite nice but the concept of a cold jelly soup was a bit too weird for me to handle.

Last but not least, Russians LOVE their dill. When in doubt and needing some greens, add some dill, together with mayonnaise! Dill gets added to most salads too, and soups, and is basically a staple in any kitchen.