Scarlet Sails: A Festival of Hope

Over a million people came to celebrate the send-off to adult life - the Scarlet Sails - on Saturday night as a beautiful tall ship sailed along the Neva River and fireworks erupted over St. Petersburg. A live concert was also held on Palace square in the shadow of the Winter Palace with participation from all the lucky ticket holders, students, teachers and parents. 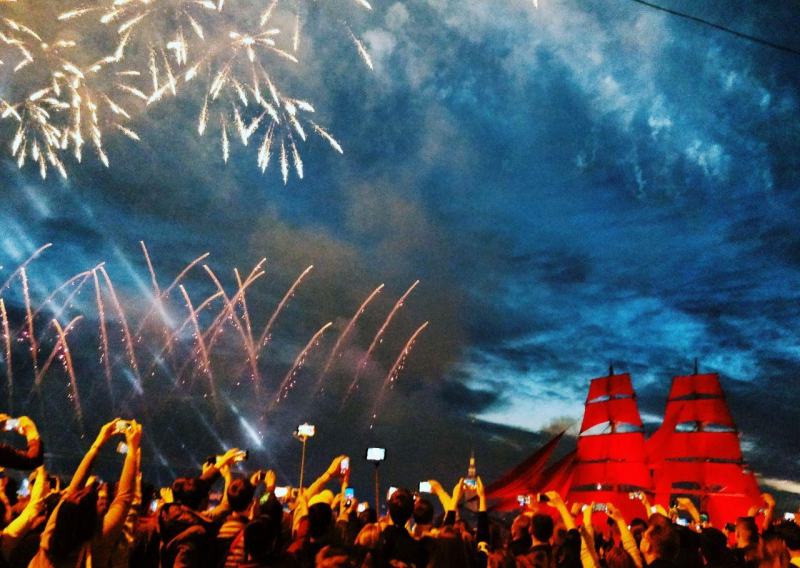 What started as high school graduation night has turned into one of the most spectacular events in our city. Graduates - and just about everyone ready to have a great time - crowded the streets and the embankments around the Neva on Saturday night to watch the spectacular ship and the fireworks, and to relive the message that anything is possible, just as “You can do anything! The time is now” boomed over Palace Square.

The history of the celebration begins in 1968 as the only event for graduates of schools in the Soviet Union, "Scarlet Sails" appeared in Leningrad, and already then its introductory theatrical part was held on the water in the area of the Neva. The event was colorful, unusual, bright and fascinating, just as it is now. The festivities lasted until the early hours of the morning, and the show was attended by more than 25,000 graduates.

From that day on, the celebration of the Scarlet Sails became traditional and was held until 1979, when the celebration was canceled. Since then the event was celebrated more informally with high school graduates taking to the streets of the city on that night and it only made a formal come back in 2005.

This year the Scarlet Sails celebrated its 50th anniversary. Now it’s a large multimedia performance in open water with the use of all the latest visual technologies. But the star of the event was a tall ship named Tre Kronor from Stockholm. Well over a million people celebrated this year's event, together with those watching at home through the live broadcast.

Whether you graduated now or years ago, the Scarlet Sails is always inspiring new beginnings and bringing out a hopeful youth in all of us.

All the photo credit: _higher_than_higher_