ITMO University continues to establish academic cooperation with one of Japan’s largest universities, the Kindai University. This partnership is made possible by support from Monodzukuri, the Japanese government's project that encourages  exchange  of experience and the training of professionals in high-tech and natural sciences fields for the Russian-Japanese business. As part of this program, ITMO students Andrei Palshin and Ivan Bereznoy, as well as head of the Mechatronics Department Sergey Kolyubin spent two weeks on an introductory internship in Kindai University. 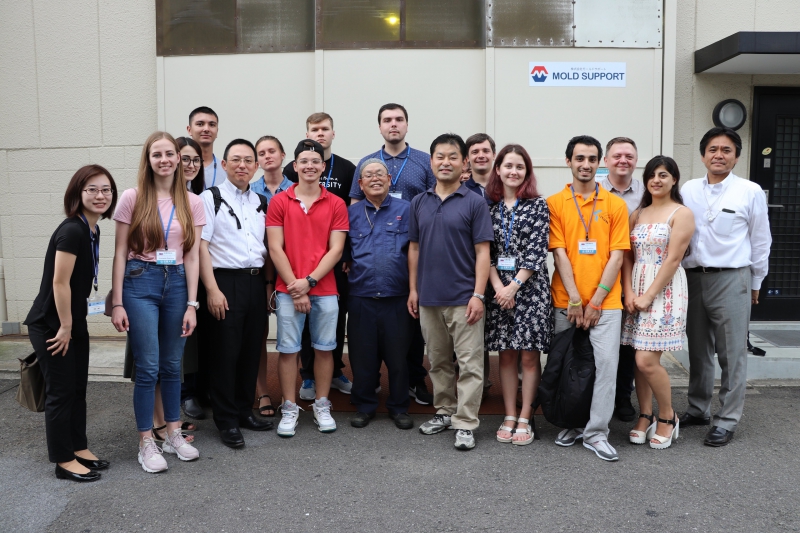 The project’s global goal is to train specialists who will develop new products for Russian-Japanese businesses. Kindai University acts as the project’s center, as it conducts research in various fields: natural sciences and engineering, medicine, agriculture, fishing industry, nuclear power industry and many other.

The Monodzukuri concept is designed for engineering specialists. Sergey Kolyubin explains that the literal translation of the term is “making things by hand”, and it stems from mechanical engineering. Still, the concept of Monodzukuri has been applied to other fields, and Kindai University welcomes not just students focusing on robotics, but also those who study chemistry, photonics, nuclear physics or programming.

“The goal of our trip to Japan was to communicate with our Japanese colleagues in order to grasp the key peculiarities of Monodzukuri. To my mind, it is a really comprehensive concept that has many unique features. As an approach, it teaches to draw on a real problem, keep track of the end result and understand one’s responsibility to satisfy the client, to never simplify the problem on any stage but solve it in its whole complexity, study all possible solutions and choose the one that is most simple and reliable, often drawing inspiration from traditional Japanese art and heritage. There are counterparts to this approach in the Western countries, but one shouldn’t forget that even the lean manufacturing concept stems from the manufacturing philosophy employed by Toyota,” explains Sergey Kolyubin.

He adds that another characteristic feature of Monodzukuri is its focus on small and medium businesses that do not produce some end product but rather high-tech parts for major customers. In regard to education, Monodzukuri promotes skill-centered education. Such an approach is the answer to a crisis that emerged in Japanese higher engineering education in 1980s, when it became too focused on theoretical knowledge.

“For students, this means that the educational process is organized in collaboration with industrial partners, and features many practical assignments, including working with modern robots, machinery, and other advanced equipment. This gives them an opportunity to see and “feel” the whole production chain, from getting an idea to manufacturing and commercialization of the product. Kindai University has all the necessary facilities for this purpose, including such equipment as an automated production line for manufacturing composites and processing of titanium, holographic apparatuses, even their own training reactor and tuna farms,” comments the head of Mechatronics Department.

Apart from attending lectures and going on tours to laboratories and enterprises, the Russian delegation to Kindai University succeeded in organizing a joint workshop with Japanese professors. The latter presented their inventions in the field of mechanical engineering, and Sergey Kolyubin gave a lecture on the current research and relevant projects by ITMO.Robotics.

“Our Japanese colleagues have a series of interesting inventions in the field of rehabilitation systems, cable-driven parallel manipulators, transmission mechanisms, as well as titanium processing technologies, creating structures from hybrid composite materials, and many other. In their turn, the Japanese professors were pleasantly surprised with the level of robotics research at ITMO University and expressed their willingness to develop scientific cooperation between us. As we promote practice-oriented education at the School of Computer Technologies and Control, common research topics can serve as a foundation for successful student exchange,” says Sergey Kolyubin.

In order to go to the summer school at Kindai University, Master’s student Andrei Palshin from the Mechatronics Department and Bachelor’s student Ivan Bereznoy from the Department of Computer System Design and Security participated in a portfolio contest. They had to write a motivation letter and demonstrate their level of proficiency in the English language. On the whole, they spent almost two weeks in Japan. The receiving side covered their travel expenses and accomodation costs.

Each student from Russia followed an individual training program that had been developed based on their experience and motivation letter. Andrei spent almost all of his time in Kindai University’s laboratories, where he tested and adjusted a delta 3D printer as part of a team supervised by a Japanese professor. Ivan followed a more general program: he went on tours of several laboratories, including Kindai University's Atomic Energy Research Institute where their training reactor is located.

“Kindai University is a rich private institution that is completely self-sufficient. It has more than 10 buildings full of different laboratories. Some of them are really technologically advanced, and offer the opportunity to create your own equipment, like the one where I worked on my 3D printer,” says Andrei Palshin.

“The Japanese laboratories left a very favorable impression. They have modern professional equipment, as well as all the necessary instruments and parts, and are organized in an orderly manner. Each student has an individual workplace with a PC,” comments Ivan Bereznoy.

The students also visited several industrial sites in Osaka that operate according to the Monodzukuri concept. They comment that working in such a way implies high professionalism. When some manufacturer needs a part of the highest quality, this is where they come. This way, they can be sure that they buy the parts from people who know everything about them, and are constantly improving their equipment and their employees’ skills.

Apart from following the educational program, the summer school’s participants also had a chance to acquaint themselves with traditional Japanese culture. They attended a sumo training session, a workshop on ikebana, went to Japanese restaurants and got a course in Japanese language, as well as a series of lectures on living in Japan by an Australian professor who moved to this country. In their free time, Andrei and Ivan went to Tokyo, Kyoto, and the coast of the Pacific. In the end of their visit, they presented the results of their work to the university’s experts.

“The Japanese are a very friendly and responsive people. They really work a lot, and apologise a lot, as if they fear to do something wrong. Students at Kindai University have a more open, European attitude towards many things, because they have to study in the USA for half a year in order to get a diploma. Also, there are many international students at the university, most of whom are from other Asian countries,” says Andrei Palshin.

Andrei and Ivan shared several life-hacks for those who want go to Kindai University:

You can learn more about academic mobility at the Academic Mobility Support Office.